Animals like horse, mule, donkey camel, and elephant etc., are used for carrying small loads in backward areas, hilly tracks, forest regions and deserts known as pack animals. Generally, the pack animals serve areas which are inaccessible to modern means of transport. Animal transport has also played a significant role where there is no road and railway transport. 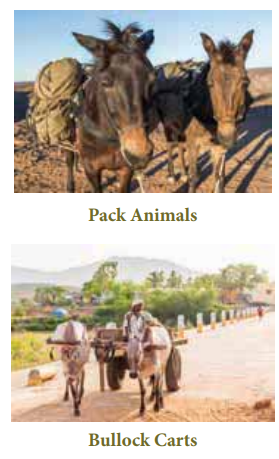 It constitutes the predominant form of rural road transport in India for goods traffic and to some extent for passengers’ traffic. It links up the villages with the nearby markets and railway stations. It carries the produce for sale to the market and consumer goods to the villages.

Road Transport is one of the most promising and potent means suitable for short and medium distances. It provides the basic infrastructure for bringing the majority of the people who are living in far-off villages into the mainstream of nation like by connecting them to different places. It offers a number of advantages such as flexibility, reliability, speed and door-to-door service, besides supplementing and increasing the efficiency of the other modes of transport.

From the dawn of civilization, people have been endeavoring to form roads and use wheeled  vehicles  to  facilitate  transport of men and materials. The credit of revolutionizing the road transport and introducing the elements of speed and greatercarryingcapacityintothesystemgoes to motor lorries and buses. Introduction of petrol engine and later diesel engine vehicle has been offering good competition to the railways.

It made their appearance in the 19th century as a form of transport suitable for big cities. Tramways were initially  horse  drawn  later steam-powered and now electrically operated. Its carrying capacity is large. They are able to cope up with the peak hour traffic in big cities with the greater popularity of motor buses, tramways slowly declined. Madras city had tramways till 1933. 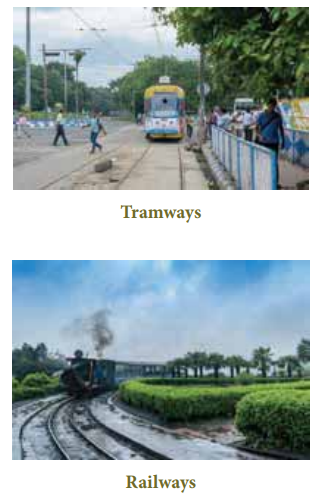 Railways render an essential public service. It requires a huge capital outlay for laying of tracks, construction of bridges, purchase of locomotives etc. Railways are  among the biggest public utilities of a country.

Rail transport is a means of transferring of passengers and goods on wheeled vehicles running on rails (tracks). Rail transport stated to be important in the Industrial Revolution.

There are three types of tracks that are in operation. They are (I) Meter gauge (ii) Broad gauge and (iii) Narrow gauge