Water is a variable visual environment, in part because the quality of light changes with depth.

Water is a variable visual environment, in part because the quality of light changes with depth. As depth increases, light becomes dimmer due to absorption, and the color of light changes because absorption is not equal for all wavelengths. Light on the red-orange end of the spectrum(>550 nm) is readily absorbed by water and therefore does not penetrate far. Moderate wavelengths, such as yellow and green, travel farther, and deep blue to violet light penetrates farthest into deep water. Ultraviolet light, however, does not penetrate far. It is not surprising, therefore, that over 500 million years of natural selection has produced numerous morphological and physiological adaptations suited to capturing and detecting light that is characteristic of the habitat in which a species lives.

The eyes of fishes are similar to those of other vertebrates, including those of humans (Fig. 6.8). Light first passes through a thin, transparent cornea and enters the eye through the pupil. The diameter of the pupil is fixed in teleost’s and lampreys, but elasmobranchs have a muscular iris which controls its size and thereby regulates the amount of light entering the eye. The pupils of most Deepwater sharks are circular, whereas most other sharks haveslitlike pupils; most skates and rays have pupils that are crescent-shaped (Hueter et al. 2004). 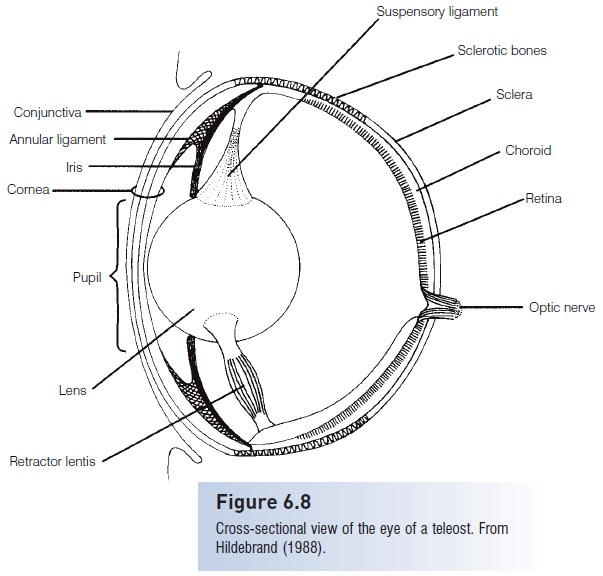 Cross-sectional view of the eye of a teleost.From Hildebrand (1988).

Light next passes through the lens, which is denser and more spherical than the convex lens of terrestrial vertebrates(Hawryshyn 1998), although the lenses of some elasmobranchs are somewhat elliptical. After light passes through the lens, it travels through the liquid-filled center of the eye before encountering the several layers of theretina, which contains the photo sensory cells. Fishes focus on objects at different distances by moving the lens, thereby adjusting the distance between the lens and the retina.

Light passes through three layers of nerve cells before striking the photoreceptor cells in the retina’s outermost layer. Fishes may have two general types of sensory cells inthe retina, rods and cones. Rods are quite sensitive to lowlight levels and provide low resolution. Crepuscular species(those that are active at dawn and dusk) have high rod : coneratios, and many nocturnal and deep sea fishes have only rods. In other fishes, photomechanical movement of melanin in the retina exposes the rods in dim light and shields them in bright light (Hawryshyn 1998).

Many fishes also have cones, which are less sensitive than rods and therefore require brighter light. Cones provide greater resolution, and cone : rod ratios are highest in diurnal fishes, which rely more on vision. There are several types of cones, each with a different photoreceptive glycoprotein (opsin) that responds to different wavelengths of light. Fishes may have only two or three of these types of cones, depending on the light quality in the fish’s habitat(see Guthrie & Muntz 1993; Hueter et al. 2004). Porphyropsinsare sensitive to yellow-red light, which has longer wavelengths and attenuates relatively quickly in water. Therefore, porphyropsins tend to be more common in fishes living in shallow areas or closer to the surface. Rhodopsin are more sensitive to shorter wavelength, blue greenlight which penetrates further into the water, and are therefore common in fishes inhabiting somewhat deeper areas. Most elasmobranchs, for example, have rhodopsin’s,but porphyropsins are rare in this group. Chrysopsins are most sensitive to deep blue light, which penetrates furthest into the water due to its short wavelength, and these are found in deep sea fishes.

Some fishes also have photoreceptors sensitive to ultraviolet(UV) light, which does not penetrate far into water.

Therefore, UV-sensitive fishes tend to inhabit relatively shallow areas. Sensitivity to violet and UV light is common among coral reef fishes, and may be especially useful for close-range communication because UV light attenuates rapidly in water. Two-bar Damselfish (Dascyllus reticulatus)have a UV-reflective patch on their dorsal fin that is used as an alarm signal to conspecifics, but is not noticed by predatory fishes because they cannot detect UV light (Losey2003). Male damselfish of another species,Pomacentrusamboinenesis, have UV-reflective patterns on their faces, which are important in aggressive territorial interactions, but are not visible to nearby predators (Siebeck 2004).Some freshwater fishes also use UV communication for attracting mates. Male Panuco Swordtail (Xiphophorus nigrensis)have UV-reflective markings that attract females but that are not visible to the species’ main predator Astyanaxmexicanus (Cummings et al. 2003). UV vision can be useful for prey capture as well. Juvenile Rainbow Trout (Oncorhynchusmykiss) rely on UV vision to see their zooplankton prey (Daphnia), which appear transparent to humans (see Warrant& Locket 2004). As the trout mature, they lose their UV sensitivity as photoreceptors in the retina change(Hawryshyn 1998), but their diet also changes.

Photoreceptors are not evenly distributed on the retina, and may occur in distinct patches or bands with higher densities. This has been noted in some elasmobranchs(Hueter et al. 2004), but it is not yet fully understood how this may affect a fish’s vision. The pattern of photoreceptors in the retina of the Striped Marlin (Tetrapturus audax)suggests that the region of the retina receiving light from above or in front of the fish provides greater acuity and color recognition, whereas the region of the retina receiving light from below is better suited for detecting dim, upwelling blue light (Fritsches et al. 2003). This arrangement provides sharp color vision in brighter surface waters, and also permits the detection of dimly lit objects below the fish. The pattern of photoreceptors of the European Smelt (Osmerus eperlanus) also seems suited for sharp prey detection in front of the fish, and maximum sensitivity to dim light, and perhaps predators, coming from below(Reckel et al. 2003). The retinal structure of the burrowing, deep water Rufus Snake Eel (Ophichthus rufus) suggests three regions of high visual acuity that could help with locating food and burrows (Bozzano 2003).

Fishes may show ontogenetic shifts in photoreceptors that correlate with changes in habitat at different life stages.

We mentioned earlier the loss of UV-sensitive cones in Rainbow Trout as they grow and shift diet. In another example, juvenile Lemon Sharks (Negaprion brevirostris)have porphyropsins, which are beneficial in shallow, turbid, inshore habitats, but as the fish get older the pigments change to rhodopsin’s, which are more useful as the fish move to the deeper, clearer open ocean (see Hueter et al.2004). Similar porphyropsin–rhodopsin shifts occur in other fishes, including diadromous lampreys, salmon, and eels, which change pigments as part of the endocrine induced physiological changes needed to move from shallow freshwater habitats into the much deeper open sea (seeHawryshyn 1998). Yellowfin Tuna (Thunnus albacares) also may show changes in expression of visual pigments as they grow from planktivorous larvae to larger piscivores (Loewet al. 2002).

Not only can fishes detect a wide range of light wavelengths, including UV, but some fishes, such as anchovies(Engraulidae), cyprinids, salmonids (Salmonidae), and cichlids(Cichlidae), can detect polarized light. This probably enhances the contrast of objects viewed underwater, permittinga better view of predators, prey, and potential mates, as well as providing directional information for migrating fishes. The ability to detect polarization may be most useful at dawn and dusk, when the percent polarization of light is highest (Hawryshyn 1992, 1998).

The choroid is a highly vascularized region between the protective sclera and the photoreceptive retina. It may contain a tapetum lucidum, a layer of reflective guanine crystals that probably enhances visual sensitivity under lowlight conditions by reflecting light not absorbed by the retina back into the eye. The tapetum causes the reflective shine in the eyes of sharks and many nocturnal fishes.Tapeta lucida are found in the Australian Lungfish(Neoceratodus), bichirs (Polypterus), most elasmobranchs, the Holocephali, coelacanths, sturgeons, and some teleost’s(Bone & Moore 2008). In some sharks, such as those that are active near the surface during the day, the tapetum can be covered by dark pigment when light is abundant, and only uncovered when needed under low light conditions(Hueter et al. 2004). The tapeta of deep sea sharks remainreflective all of the time.

The retina has among the highest oxygen demand of any tissue in the body, and in most fishes a choroid gland maintains high oxygen levels in the retina. This U-shaped structure surrounds the optic nerve where it exits the eye. Blood flowing to and from the choroid gland travels through arete mirabile (a counter current mechanism similar to that of the gas bladder;  Buoyancy regulation),maintaining high oxygen levels in the gland and assuring the retina of a plentiful oxygen supply. The choroid gland receives oxygenated blood from the pseudo branch, a gill like structure on the inside surface of the operculum. Removal of the pseudo branch in trout (Salmo) results in decreased oxygen near the retina and a progressive loss of visual pigment (Ballintijn et al. 1977). Antarctic fish with achoroid rete have more oxygen in the eye and a betteroptomotor response than a related species that lacks achoroid rete (Herbert et al. 2003).

The outer layer of the eye (the sclera) is reinforced to protect the eye’s delicate internal structures. The sclera ofagnathans is fibrous and firm, chondrichthyans have cartilaginous plates in their sclera, and teleost’sfrequently possess sclerotic bones. These are well developed in the mackerels and tunas (Scombridae) and particularly in the billfishes (Istiophoridae and Xiphiidae), which have a bony stalk extending part way back along the path of the optic nerve to the brain.