The lateral line system is an old feature in the history ofvertebrates, as indicated by its presence in fossil jaw less fishes from the Silurian.

The lateral line system is an old feature in the history ofvertebrates, as indicated by its presence in fossil jawlessfishes from the Silurian. The system is only useful in water,and is therefore restricted to fishes and larval and permanently aquatic amphibians. The hair cells of the lateral linesystem are organized into neuromasts, which allow fishesto detect vibrations in the water that originate from orreflect off prey, predators, other fishes in a school, andenvironmental obstacles. These neuromasts are clusters ofcells that are typically covered by a gelatinous cupula (Fig.6.2), which can be displaced by water movement, therebymoving the cilia of the hair cells and initiating a change in signals to the brain (Schell art& Wubbells 1998). Thecupula helps screen out background “noise” by preventingthe hair cells from being affected by small vibrations – onlyvibrations strong enough to move the entire cupula will bedetected by the hair cells within it. 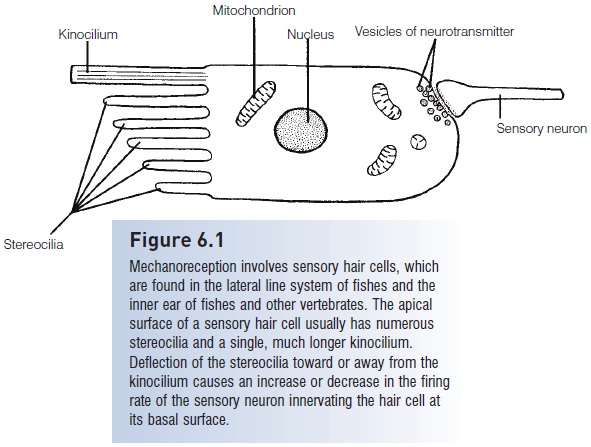 Mechanoreception involves sensory hair cells, which are found in the lateral line system of fishes and the inner ear of fishes and other vertebrates. The apical surface of a sensory hair cell usually has numerousstereocilia and a single, much longer Kino cilium.Deflection of the stereo cilia toward or away from the Kino cilium causes an increase or decrease in the firing rate of the sensory neuron innervating the hair cell atits basal surface.

(A) Cross-section of the lateral line on the trunk of a fish showing the distribution and innervation of neuromast receptors and the location of pores thatconnect the canal to the external environment. (B) Each neuromast is composed of several sensory hair cells, support cells, and innervating sensory neurons. The apical Kino cilia and stereo cilia project into a gelatinous cupula which overlays the entire neuromast.

The lateral line system has two main subdivisions –superficial neuromasts, which are free-standing on the skin, and canal neuromasts, which are located in channelsbeneath the scales of the trunk (the “lateral line”) and in dermal bones of the head (“cephalic lateral line canals”)and which open to the surrounding water via small pores(Fig. 6.2). Early in development all neuromasts are superficial and tend to be concentrated around the head, but asdevelopment progresses they spread along the trunk andin many fishes they become incorporated into canals thatrun below the skin or scales (Poling & Fuiman 1998; Diazet al. 2003; Gibbs & Northcutt 2004). Superficial neuromastsare more exposed, making them quite sensitive towater movement across the skin. This makes them particularly effective for detecting water currents fororientation(rheotaxis) or movement of the fish itself in areas with littlewater velocity, but not very useful for detecting smallstimuli in areas of swift or turbulent water (Engelmannet al. 2000, 2002). They also are most effective in detecting currents that are unidirectional or at frequencies below20 Hz (Braun et al. 2002). Superficial neuromasts are moreabundant in fishes that are sedentary or slow swimmers andthat inhabit quiet areas, such as the Goldfish (Carassiusauratus). Canalneuromasts, however, are shielded from constant stimulation by water moving across the skin andare better at detecting stimuli if the fish or the water around it is moving quickly. Therefore, they are more effective in detecting transient currents, or currents of higher frequency(20–100 Hz; see Braun et al. 2002). These, therefore, tendto be better developed in fishes that are fast swimmers or that live in fast or turbulent water. Rainbow Trout(Oncorhyunchus mykiss), for example, often inhabitrunning water and have very few superficial neuromastsbut have well-developed neuromasts in narrow canals(Engelmann et al. 2002). And the canal neuromasts of theMottled Sculpin (Cottus bairdi) help the fish locate prey byfiltering out background stimuli due to water currents(Kanter & Coombs 2003).

As an example of the relationship between the lateral line system and habitat use, Poling and Fuiman (1998)studied the development of lateral line systems and visionin juveniles of three species of drum (family Sciaenidae). Asin other fishes, the superficial neuromasts develop first, andthen some become incorporated into canals as developmentcontinues and the fishes become more active. However, the relative abundance of the two types of neuromasts differed among species and correlated well with juvenile habitat and the relative role that vision might also play. Juvenilesof Spotted Seatrout (Cynoscion nebulosus), which inhabit shallow, murky, and often weedy inshore areas wheremechanoreception would be more critical to predator andprey detection, had significantly more superficial neuromastson their heads than did juveniles of Red Drum(Sciaenops ocellatus) or Atlantic Croaker (Micropogonisundulatus). Juveniles of Atlantic Croaker settle the furthest offshore, where the water is clearer and deeper, and they are larger and have the best developed eyes of the three species. Red Drum juveniles are somewhat intermediate in both their habitat (bays and nearshore areas) and their sensory development.

There are other examples of fishes in which mechanoreceptionhelps compensate for a poor visual environment.

Under experimental conditions, Lake Trout (Salvelinusnamaycush) detected and followed the hydrodynamic trails left by prey fishes in total darkness, and their ability tocapture prey was significantly inhibited when the lateral line system was rendered ineffective (Montgomery et al.2002). Mottled Sculpin feed in low light conditions andrely on their lateral lines to detect and locate prey (Braunet al. 2002). And Blind Cave Fish (Astyanax fasciatusmexicanus/Anoptichthys jordani) have many superficialneuromasts, as well as taste buds, on their heads to helpcompensate for the inability to see (Schell art& Wubbells1998). They rely more on their lateral line system than anyother sense (Montgomery et al. 2001a).

Some fish predators have learned that their prey canbe attracted to vibrations and have used this to theiradvantage. Several species of piscivorous birds, includingherons and egrets (family Ardeidae) have been observedcreating disturbances in the water’s surface by tongue flicking or bill-vibrating in order to attract fishes (Davis2004). In addition, the recreational angling industrydesigns lures that create vibrations in the water, and evenfishing rods have been developed that have built-in,battery-operated vibration devices that claim to enhance angling success.