Ampullary receptors are much more widespread among fishes, and have been identified in lampreys (Petromyzontiformes),sharks and their relatives (Chondrichthyes),lungfishes (Ceratodontiformes), reed fishes(Polypteriformes),coelacanths (Coelacanthiformes), sturgeons and paddlefishes (Chondrostei), and several orders of more advanced bony fishes including the Osteoglossiformes,Gymnotiformes, and Siluriformes (Collin & Whitehead2004). These receptors typically are located in small pockets in the skin at the end of a canal filled with an electroconductivegel made primarily of mucopolysaccharides and water. They are particularly abundant among elasmobranchs, where they were first identified as the ampullae of Lorenzini. Ampullary receptors are responsible for passive electroreception – the detection of electric fields originating from sources outside the fish receiving the signal.

Ampullary receptors respond to low-frequency electrical stimuli, including those that are a result of the physical environment and those of biological origin, such as muscle contractions or electric potential differences across epithelial membranes (von der Emde 1998).

The sensory cells are modified hair cells whose release of neurotransmitter is modulated by the difference in membrane potentials between the apical and basal membrane (Collin &Whitehead 2004). The neurons to the brain constantly generate nerve signals (action potentials) and the rate of signals increases or decreases depending on external electric fields – so the system is extremely sensitive to any electrical changes outside the fish (von der Emde 1998).The rate of nerve signals may also change with temperature, leading to speculation that the ampullary receptors may also function as thermal receptors (Hueter et al. 2004).

Most fishes known to have ampullary receptors are marine – many are elasmobranchs, a primarily marine group. The higher ionic concentration of salt water makes it a very good conductor of electricity, and the conductive gel in the canal allows the voltage current to easily reach the receptor cells across the rather thick, less-conductive skin. Although fresh water does not conduct electricity as well as salt water does, elasmobranchs found in fresh water, suchas the euryhaline Bull Shark (Carcharhinus leucas),also have functional ampullary receptors. Ampullary receptors also are known among exclusively freshwater fishes, although they tend to have fewer receptor cells than marine species have, and the receptor cells are closer to the surface of the skin, making the canals shorter. Freshwater fishes with ampullary receptors include sturgeons (Acipenseridae),some of which are also marine or anadromous, and the exclusively freshwater Eel-tailed Catfish (Plotosustandanu) of Australia, and Paddlefish (Polyodon spathula)and Brown Bullhead (Ameiurus nebulosus) of North America (Collin & Whitehead 2004).

One of the main uses of ampullary receptors is for prey detection. Ampullae often are concentrated around the head, and in some fishes they are especially abundant around the snout and mouth (Collin & Whitehead 2004).Sharks have many ampullae concentrated in the head, especially on the ventral side of the snout, and the broad head of the Scalloped Hammerhead Shark (Sphyrna lewini)may allow it to sample a wider area than sharks with narrower snouts (Kajiura & Holland 2002). Kalmijn (1971)showed that sharks could detect and would attack living prey or electrodes emitting mild electrical signals, but would ignore dead prey or live prey or electrodes that were covered by a barrier that prevented the conduction of electric fields. A similar experiment with Australian Lungfish(Neoceratodus forsteri) showed that they also use electroreception to detect prey (Watt et al. 1999).

Whereas sharks tend to have ampullary organs concentrated around the head, skates and rays also have them onthe pectoral fins as well. The density of ampullary receptor pores on the ventral surface of skates that feed on benthic prey is higher than the density on the ventral surface of skates that feed on more mobile prey, further supporting the role of electroreception in prey detection (Collin &Whitehead 2004). Skates that live in deeper water have more and larger ampullae than those that live in shallower areas, even within the same species, perhaps making the deeper fish more sensitive to bioelectricity and permitting them to detect prey from a greater distance (Raschi &Adams 1988). The Eel-tailed Catfish has ampullary receptors on much of the body, but they are most abundant on the head (Whitehead et al. 2003). The electro sensoryprey detection capability of the Paddle fish of the Mississippi River drainage of North America is among the best of all freshwater fishes studied thus far. The elongated and flattened rostrum of this fish contains many ampullary receptors, and acts as an antenna permitting juvenile Paddlefish to detect individual zooplankters from as far away as 9 cm(Wilkens et al. 2002; Wilkens & Hofman 2007). This is particularly helpful because Paddlefish often live in areas with murky water and poor visibility. As the fish gets larger and its gill rakers develop it becomes a non selective filter feeder, so detecting individual zooplankters may not be as critical. However, larger fish begin filter feeding when live plankton are nearby, suggesting that the electro sensorycapability may still help the fish detect and respond to the presence of zooplankton (see Fig. 13.16).

Another use of passive electroreception is the detection of potential predators. Embryonic Clear nose Skates (Rajaeglanteria) use their tails to move water through the egg case for respiration, but the muscular activity also generates electrical signals which could be detected by nearby predators. When the skates detect weak electrical stimuli from another source, the tail movements stop (Sisneros et al.1998). Similarly, newly hatched Small-spotted Catshark(Scyliorhinus canicula) temporarily cease the ventilator activity of their gills when they detect electrical stimuli that might represent a nearby predator (Peters & Evers 1985).

Ampullary receptors may also be important in social interactions, such as the recognition and location of conspecifics for mating. Male Round Stingray (Urobatus halleri)can locate females buried in the sand based on the weak voltages produced by the female’s respiratory muscles(Collin & Whitehead 2004). Peters et al. (2002) speculate that the variability of the bioelectric field created by basic physiological processes of the Brown Bullhead could provide a means of communication with conspecifics.

There has been considerable speculation regarding the role that electroreception may play in compass orientation among sharks. Kalmijn (1982, 1984, 2003) proposed thatampullary receptors may permit some sharks to detect electric fields that are the result of movement of the fish, or water masses such as ocean currents, across the earth’s magnetic field – thereby providing navigational cues for compass orientation. Paulin (1995), however, hypothesized that a shark turning its head while swimming could alterelectrosensory inputs created by the fish’s movement enough that this, combined with sensory input from the semicircular canals, provides sufficient information for the fish to determine its direction. Klimley (1993) suggested that the shark’s electro sensory organs, or some other yet to-be-identified sensory system, may allow the shark to track the geomagnetic patterns created by the mineral content of the ocean floor.

The sensitivity of ampullary receptors, and therefore their specific purpose, may change during the life of a fish.

For example, the response properties of the ampullaryreceptors of the Atlantic Stingray (Dasyatis sabina) changes from being able to detect signals typical of large predators while the fish is young to being better able to detect prey and locate mates when the fish is older (Sisneros & Tricas2002). A somewhat similar ontogenetic shift in sensitivity occurs in the Clear nose Skate (Raja eglanteria), an electro genicspecies that utilizes electrical communication for social and mating interactions (Sisneros et al. 1998). The density of ampullary receptors may also change as the age and the need for keen electro receptive capability changes. Juvenile Scalloped Hammerhead Shark feed in turbid water with poor visibility, and have a very high density of ampullarypores on their heads. As the fish grows, the head broadens and the pores become more widely spaced – but the fish also moves into more open water where visibility is better (Collin & Whitehead 2004). Similar trends of decreasing ampullary pore density with increasing age are also seen in the Bonnet head (Sphyrna tiburo) and Sandbar Shark (Carcharhinus plumbeus).

Tuberous receptors are responsible for active electro location– the detection of an electric field produced by the fish’s own electric organs. Therefore, they are only found in those teleost’s that generate an electric organ discharge(EOD), such as the mormyrids, gymnarchids, and mochokidcatfishes of Africa and the gymnotoids of South America. Activeelectro location is limited to freshwater fishes, perhaps because sea water is such a good conductor that maintaining functional sensory field is too difficult.

Schematic diagram of the structure of ampullary (A) and tuberous (B) electro receptive organs. Both organs are surrounded by layers of flattened cells that join tightly to one another. This helps prevent current from bypassing the organs. Tight junctions between the receptor cells and supporting cells help focus incoming electric current through the base of the receptor cells, where they synapse with sensory neurons. Supporting cells in ampullary organs produce a highly conductive gel that fills the canal linking the sensory cells to the surrounding water. Adapted fromHeiligenberg (1993), drawing courtesy of H. A. Vischer.

Tuberous receptors are located in depressions of the epidermis and are covered with loosely packed epithelial cells, allowing electric current to flow between the cells (see Fig. 6.5B). There are at least eight different types of tuberous organs in different species, but they fall into two main categories – those that encode timing of the EOD, and those that encode timulus amplitude (von der Emde 1998).The fish’s EOD frequency causes the tuberous receptor cells and their sensory neurons to generate a rather constant background rate of nerve impulses. A fish can detect objects moving into its electric field (Fig. 6.6) when those objects cause a change in the field and alter the rate of impulses received by the brain, such as when the fish encounters an object with different conductance than the surrounding water. This probably allows the fish to detect the size and distance of the object, and may also permit discrimination between living and nonliving objects because their different electrical properties would create different distortions of the electric field. 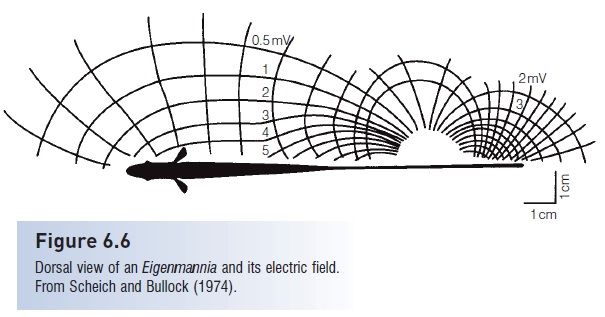