The vestibular apparatus, shown in Figure 55–9, is the sensory organ for detecting sensations of equilibrium.

Vestibular Sensations and Maintenance of Equilibrium

The vestibular apparatus, shown in Figure 55–9, is the sensory organ for detecting sensations of equilibrium. It is encased in a system of bony tubes and chambers located in the petrous portion of the temporal bone, called the bony labyrinth. Within this system are mem-branous tubes and chambers called the membranouslabyrinth.The membranous labyrinth is the functionalpart of the vestibular apparatus. 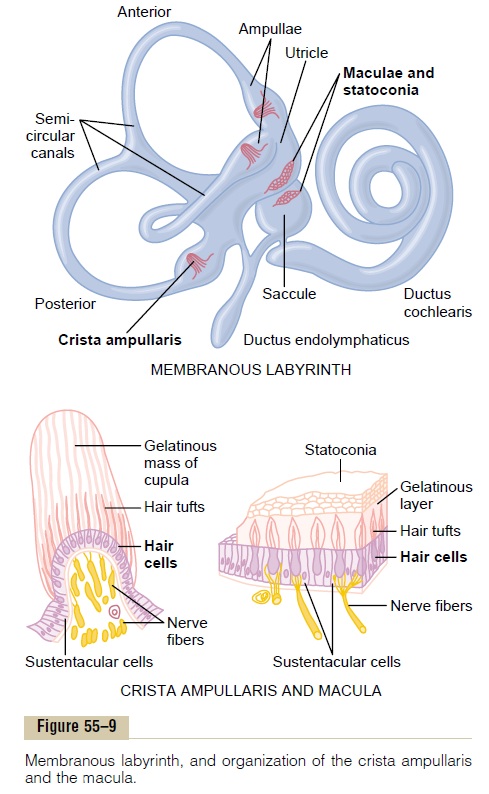 The top of Figure 55–9 shows the membranous labyrinth. It is composed mainly of the cochlea (ductus cochlearis); three semicircular canals; and two large chambers, theutricle and saccule. The cochlea is the major sensory organ for hearing  and has little to do with equilibrium. However, the semi-circular canals, the utricle, and the sacculeare all inte-gral parts of the equilibrium mechanism.

“Maculae”—Sensory Organs of the Utricle and Saccule for Detecting Orientation of the Head with Respect to Gravity.

Located on the inside surface of each utricle and saccule, shown in the top diagram of Figure 55–9, is a small sensory area slightly over 2 millimeters in diam-eter called amacula. The macula of the utricle lies mainly in the horizontal plane on the inferior surface of the utricle and plays an important role in deter-mining orientation of the head when the head is upright. Conversely, the macula of the saccule is located mainly in avertical plane and signals head orientation when the person is lying down.

Each macula is covered by a gelatinous layer in which many small calcium carbonate crystals called statoconia are embedded. Also in the macula are thou-sands of hair cells, one of which is shown in Figure 55–10; these project cilia up into the gelatinous layer. The bases and sides of the hair cells synapse with sensory endings of thevestibular nerve. 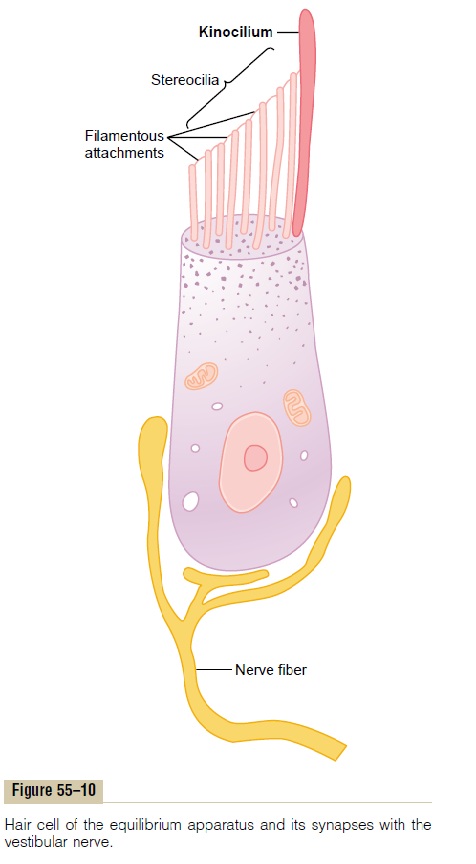 Directional Sensitivity of the Hair Cells—Kinocilium. Eachhair cell has 50 to 70 small cilia called stereocilia, plus one large cilium, the kinocilium, as shown in Figure 55–10. The kinocilium is always located to one side, and the stereocilia become progressively shorter toward the other side of the cell. Minute filamentous attachments, almost invisible even to the electron microscope, connect the tip of each stereocilium to the next longer stereocilium and, finally, to the kinocilium. Because of these attachments, when the stereocilia and kinocilium bend in the direction of the kinocilium, the filamentous attachments tug in sequence on the ster-eocilia, pulling them outward from the cell body. This opens several hundred fluid channels in the neuronal cell membrane around the bases of the stereocilia, and these channels are capable of conducting large numbers of positive ions. Therefore, positive ions pour into the cell from the surrounding endolymphatic fluid, causing receptor membrane depolarization. Con-versely, bending the pile of stereocilia in the opposite direction (backward to the kinocilium) reduces the tension on the attachments; this closes the ion chan-nels, thus causing receptor hyperpolarization.

Under normal resting conditions, the nerve fibers leading from the hair cells transmit continuous nerve impulses at a rate of about 100 per second. When the stereocilia are bent toward the kinocilium, the impulse traffic increases, often to several hundred per second; conversely, bending the cilia away from the kinocilium decreases the impulse traffic, often turning it off com-pletely. Therefore, as the orientation of the head in space changes and the weight of the statoconia bends the cilia, appropriate signals are transmitted to the brain to control equilibrium.

In each macula, each of the hair cells is oriented in a different direction so that some of the hair cells are stimulated when the head bends forward, some are stimulated when it bends backward, others are stimu-lated when it bends to one side, and so forth. There-fore, a different pattern of excitation occurs in the macular nerve fibers for each orientation of the head in the gravitational field. It is this “pattern” that apprises the brain of the head’s orientation in space.

Semicircular Ducts. The three semicircular ducts in eachvestibular apparatus, known as the anterior, posterior, and lateral (horizontal) semicircular ducts, are arranged at right angles to one another so that they represent all three planes in space. When the head is bent forward about 30 degrees, the lateral semicircu-lar ducts are approximately horizontal with respect to the surface of the earth; the anterior ducts are in vertical planes that project forward and 45 degreesoutward, whereas the posterior ducts are invertical planes that project backward and 45 degreesoutward.

Each semicircular duct has an enlargement at one of its ends called the ampulla, and the ducts and ampulla are filled with a fluid called endolymph. Flow of this fluid through one of the ducts and through its ampulla excites the sensory organ of the ampulla in the following manner: Figure 55–11 shows in each ampulla a small crest called a crista ampullaris. On top of this crista is a loose gelatinous tissue mass, the 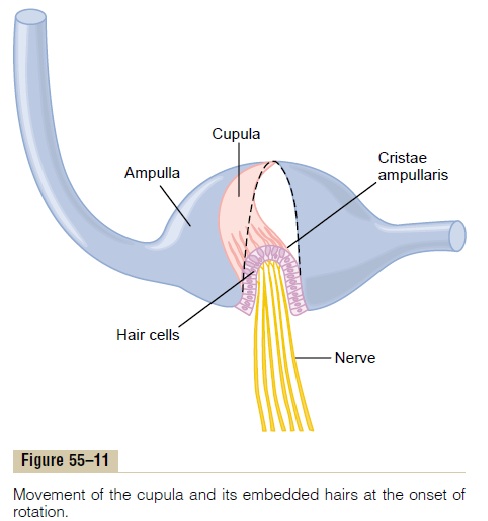 cupula. When a person’s head begins to rotate in anydirection, the inertia of the fluid in one or more of the semicircular ducts causes the fluid to remain station-ary while the semicircular duct rotates with the head. This causes fluid to flow from the duct and through the ampulla, bending the cupula to one side, as demon-strated by the position of the colored cupula in Figure 55–11. Rotation of the head in the opposite direction causes the cupula to bend to the opposite side.

Into the cupula are projected hundreds of cilia from hair cells located on the ampullary crest. The kinocilia of these hair cells are all oriented in the same direc-tion in the cupula, and bending the cupula in that direction causes depolarization of the hair cells, whereas bending it in the opposite direction hyperpo-larizes the cells. Then, from the hair cells, appropriate signals are sent by way of the vestibular nerve to apprise the central nervous system of a change in rota-tion of the head and the rate of change in each of thethree planes of space.

Red Nucleus Serves as an Alternative Pathway for Transmitting Cortical Signals to the Spinal Cord
“Extrapyramidal” System
Excitation of the Spinal Cord Motor Control Areas by the Primary Motor Cortex and Red Nucleus
Role of the Brain Stem in Controlling Motor Function
Support of the Body Against Gravity- Roles of the Reticular and Vestibular Nuclei
Vestibular Apparatus
Function of the Utricle and Saccule in the Maintenance of Static Equilibrium
Detection of Head Rotation by the Semicircular Ducts
Vestibular Mechanisms for Stabilizing the Eyes
Other Factors Concerned with Equilibrium - Vestibular Mechanisms
Functions of Brain Stem Nuclei in Controlling Subconscious, Stereotyped Movements
Cerebellum and Its Motor Functions
Anatomical Functional Areas of the Cerebellum