Transmission of Signals from the Motor Cortex to the Muscles

Motor signals are transmitted directly from the cortex to the spinal cord through the corticospinal tract and indirectly through multiple accessory pathways that involve the basal ganglia, cerebellum, and various nuclei of the brain stem.

Transmission of Signals from the Motor Cortex to the Muscles

Motor signals are transmitted directly from the cortex to the spinal cord through the corticospinal tract and indirectly through multiple accessory pathways that involve thebasal ganglia, cerebellum, and various nuclei of the brain stem. In general, the direct pathwaysare concerned more with discrete and detailed move-ments, especially of the distal segments of the limbs, particularly the hands and fingers. 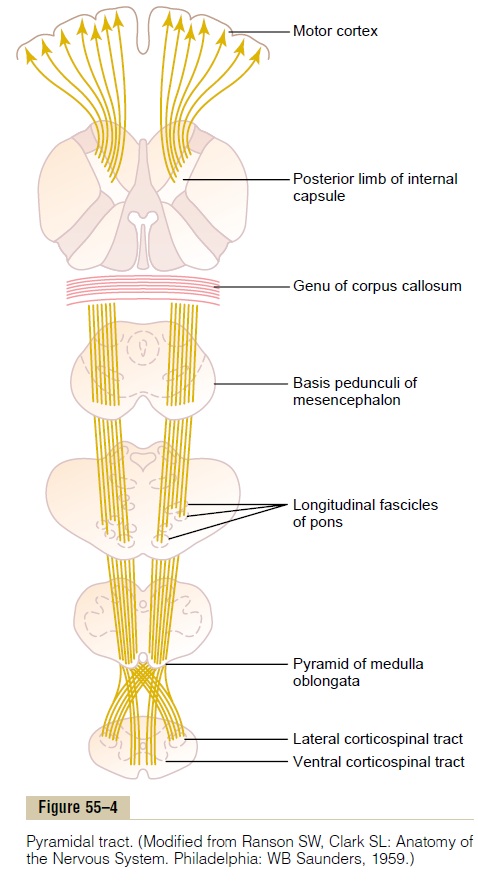 After leaving the cortex, it passes through the posterior limb of the internal capsule (between the caudate nucleus and the putamen of the basal ganglia) and then downward through the brain stem, forming the pyramids of the medulla. The majority of the pyramidal fibers then cross in the lower medulla to the opposite side and descend into the lateral corticospinaltracts of the cord, finally terminating principally on theinterneurons in the intermediate regions of the cord gray matter; a few terminate on sensory relay neurons in the dorsal horn, and a very few terminate directly on the anterior motor neurons that cause muscle contraction.

A few of the fibers do not cross to the opposite side in the medulla but pass ipsilaterally down the cord in the ventral corticospinal tracts. Many if not most of these fibers eventually cross to the opposite side of the cord either in the neck or in the upper thoracic region. These fibers may be concerned with control of bilat-eral postural movements by the supplementary motor cortex.

The most impressive fibers in the pyramidal tract are a population of large myelinated fibers with a mean diameter of 16 micrometers. These fibers originate from giant pyramidal cells, called Betz cells, that are found only in the primary motor cortex. The Betz cells are about 60 micrometers in diameter, and their fibers transmit nerve impulses to the spinal cord at a veloc-ity of about 70 m/sec, the most rapid rate of transmis-sion of any signals from the brain to the cord. There are about 34,000 of these large Betz cell fibers in each corticospinal tract. The total number of fibers in each corticospinal tract is more than 1 million, so these large fibers represent only 3 per cent of the total. The other 97 per cent are mainly fibers smaller than 4 microme-ters in diameter that conduct background tonic signals to the motor areas of the cord.

Other Fiber Pathways from the Motor Cortex

The motor cortex gives rise to large numbers of addi-tional, mainly small fibers that go to deep regions in the cerebrum and brain stem, including the following:

1.The axons from the giant Betz cells send short collaterals back to the cortex itself. These collaterals are believed to inhibit adjacent regions of the cortex when the Betz cells discharge, thereby “sharpening” the boundaries of the excitatory signal.

2.A large number of fibers pass from the motor cortex into the caudate nucleus and putamen. From there, additional pathways extend into the brain stem and spinal cord, mainly to control body postural muscle contractions.

3.A moderate number of motor fibers pass to rednuclei of the midbrain. From these, additional fiberspass down the cord through the rubrospinal tract.

5.A tremendous number of motor fibers synapse in the pontile nuclei, which give rise to the pontocerebellar fibers, carrying signals into thecerebellar hemispheres.

6.Collaterals also terminate in the inferior olivarynuclei, and from there, secondary olivocerebellar fibers transmit signals to multiple areas of thecerebellum.

Thus, the basal ganglia, brain stem, and cerebellum all receive strong motor signals from the corticospinal system every time a signal is transmitted down the spinal cord to cause a motor activity.