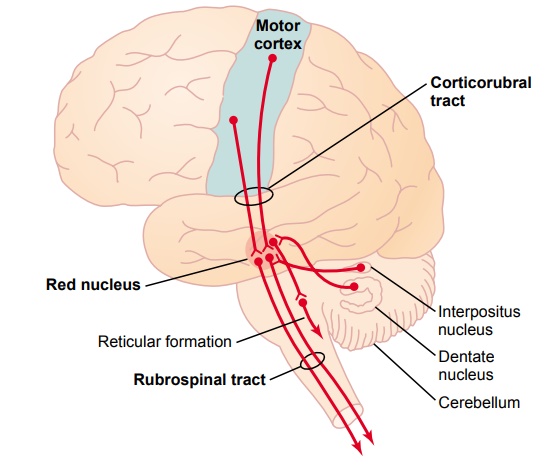 The red nucleus, located in the mesencephalon, func-tions in close association with the corticospinal tract.

The red nucleus, located in the mesencephalon, func-tions in close association with the corticospinal tract. 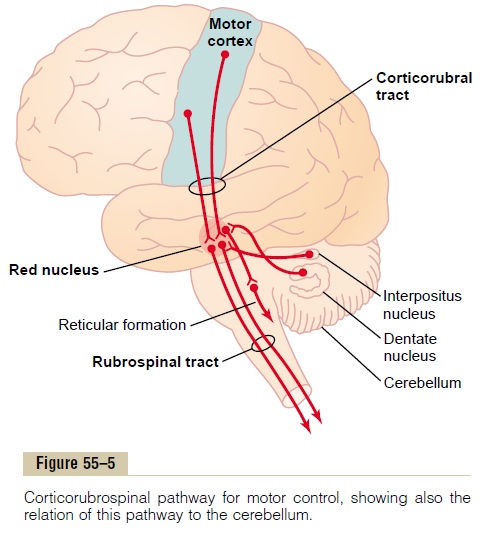 As shown in Figure 55â€“5, it receives a large number of direct fibers from the primary motor cortex through the corticorubral tract, as well as branching fibers from the corticospinal tract as it passes through the mesen-cephalon. These fibers synapse in the lower portion of the red nucleus, the magnocellular portion, which con-tains large neurons similar in size to the Betz cells in the motor cortex. These large neurons then give rise to the rubrospinal tract, which crosses to the opposite side in the lower brain stem and follows a course immediately adjacent and anterior to the corticospinal tract into the lateral columns of the spinal cord.

Function of the Corticorubrospinal System. The magnocel-lular portion of the red nucleus has a somatographic representation of all the muscles of the body, as is true of the motor cortex. Therefore, stimulation of a single point in this portion of the red nucleus causes con-traction of either a single muscle or a small group of muscles. However, the fineness of representation of the different muscles is far less developed than in the motor cortex. This is especially true in human beings, who have relatively small red nuclei.

Therefore, the pathway through the red nucleus to the spinal cord is associated with the corticospinal system. Further, the rubrospinal tract lies in the lateral columns of the spinal cord, along with the corti-cospinal tract, and terminates on the interneurons and motor neurons that control the more distal muscles of the limbs. Therefore, the corticospinal and rubrospinal tracts together are called thelateral motor systemof the cord, in contradistinction to a vestibuloreticu-lospinal system, which lies mainly medially in the cord and is called the medial motor system of the cord.

Medical Physiology
Medical - All Subjects
MBBS - All Subjects
Nursing - All Subjects
Pharmacy - All Subjects
MD - All Subjects
MGR University - All Subjects
Medical Physiology: Cortical and Brain Stem Control of Motor Function
Motor Cortex and Corticospinal Tract
Some Specialized Areas of Motor Control Found in the Human Motor Cortex
Transmission of Signals from the Motor Cortex to the Muscles
Incoming Fiber Pathways to the Motor Cortex
Red Nucleus Serves as an Alternative Pathway for Transmitting Cortical Signals to the Spinal Cord
“Extrapyramidal” System
Excitation of the Spinal Cord Motor Control Areas by the Primary Motor Cortex and Red Nucleus
Role of the Brain Stem in Controlling Motor Function
Support of the Body Against Gravity- Roles of the Reticular and Vestibular Nuclei
Vestibular Apparatus
Function of the Utricle and Saccule in the Maintenance of Static Equilibrium
Detection of Head Rotation by the Semicircular Ducts
Vestibular Mechanisms for Stabilizing the Eyes
Other Factors Concerned with Equilibrium - Vestibular Mechanisms
Functions of Brain Stem Nuclei in Controlling Subconscious, Stereotyped Movements