Neck Proprioceptors. The vestibular apparatus detects theorientation and movement only of the head.

Other Factors Concerned with Equilibrium

Neck Proprioceptors. The vestibular apparatus detects theorientation and movement only of the head. Therefore, it is essential that the nervous centers also receive appropriate information about the orientation of the head with respect to the body. This information is trans-mitted from the proprioceptors of the neck and body directly to the vestibular and reticular nuclei in the brain stem and indirectly by way of the cerebellum.

Among the most important proprioceptive informa-tion needed for the maintenance of equilibrium is that transmitted by joint receptors of the neck. When the head is leaned in one direction by bending the neck, impulses from the neck proprioceptors keep the signals originating in the vestibular apparatus from giving the person a sense of dysequilibrium. They do this by trans-mitting signals that exactly oppose the signals transmit-ted from the vestibular apparatus. However, when theentire body leans in one direction, the impulses from thevestibular apparatus are not opposed by signals from the neck proprioceptors; therefore, in this case, the person does perceive a change in equilibrium status of the entire body.

Proprioceptive and Exteroceptive Information from Other Parts of the Body. Proprioceptive information from parts ofthe body other than the neck is also important in the maintenance of equilibrium. For instance, pressure sensations from the footpads tell one (1) whether weight is distributed equally between the two feet and (2) whether weight on the feet is more forward or backward.

Exteroceptive information is especially necessary for the maintenance of equilibrium when a person is running. The air pressure against the front of the body signals that a force is opposing the body in a direction different from that caused by gravitational pull; as a result, the person leans forward to oppose this.

Importance of Visual Information in the Maintenance of Equilib- rium. After destruction of the vestibular apparatus, andeven after loss of most proprioceptive information from the body, a person can still use the visual mechanisms reasonably effectively for maintaining equilibrium. Even a slight linear or rotational movement of the body instantaneously shifts the visual images on the retina, and this information is relayed to the equilibrium centers. Some people with bilateral destruction of the vestibular apparatus have almost normal equilibrium as long as their eyes are open and all motions are per-formed slowly. But when moving rapidly or when the eyes are closed, equilibrium is immediately lost.

Neuronal Connections of the Vestibular Apparatus with the Central Nervous System 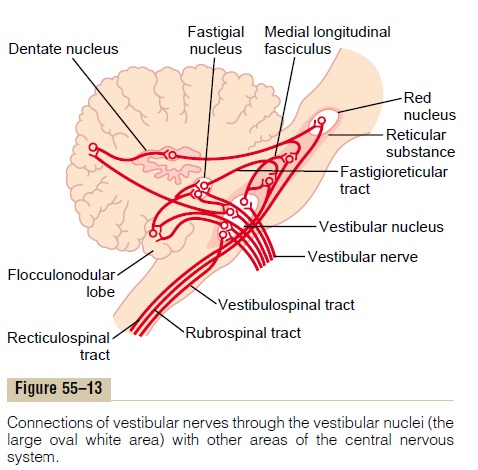 The primary pathway for the equilibrium reflexes begins in the vestibular nerves, where the nerves are excited by the vestibular apparatus. The pathway then passes to the vestibular nuclei and cerebellum. Next, signals are sent into the reticular nuclei of the brain stem, as well as down the spinal cord by way of the vestibulospinal and reticulospinal tracts. The signals to the cord control the interplay between facilitation and inhibition of the many antigravity muscles, thus auto-matically controlling equilibrium.

The flocculonodular lobes of the cerebellum are espe-cially concerned with dynamic equilibrium signals from the semicircular ducts. In fact, destruction of these lobes results in almost exactly the same clinical symptoms as destruction of the semicircular ducts themselves. That is, severe injury to either the lobes or the ducts causes loss of dynamic equilibrium during rapid changes in direc-tion of motion but does not seriously disturb equilib-rium under static conditions. It is believed that the uvula of the cerebellum plays a similar important role in static equilibrium.

Signals transmitted upward in the brain stem from both the vestibular nuclei and the cerebellum by way of the medial longitudinal fasciculus cause corrective movements of the eyes every time the head rotates, so that the eyes remain fixed on a specific visual object. Signals also pass upward (either through this same tract or through reticular tracts) to the cerebral cortex, ter-minating in a primary cortical center for equilibrium located in the parietal lobe deep in the sylvian fissure on the opposite side of the fissure from the auditory area of the superior temporal gyrus. These signals apprise the psyche of the equilibrium status of the body.

Medical Physiology
Medical - All Subjects
MBBS - All Subjects
Nursing - All Subjects
Pharmacy - All Subjects
MD - All Subjects
MGR University - All Subjects
Medical Physiology: Cortical and Brain Stem Control of Motor Function
Motor Cortex and Corticospinal Tract
Some Specialized Areas of Motor Control Found in the Human Motor Cortex
Transmission of Signals from the Motor Cortex to the Muscles
Incoming Fiber Pathways to the Motor Cortex
Red Nucleus Serves as an Alternative Pathway for Transmitting Cortical Signals to the Spinal Cord
“Extrapyramidal” System
Excitation of the Spinal Cord Motor Control Areas by the Primary Motor Cortex and Red Nucleus
Role of the Brain Stem in Controlling Motor Function
Support of the Body Against Gravity- Roles of the Reticular and Vestibular Nuclei
Vestibular Apparatus
Function of the Utricle and Saccule in the Maintenance of Static Equilibrium
Detection of Head Rotation by the Semicircular Ducts
Vestibular Mechanisms for Stabilizing the Eyes
Other Factors Concerned with Equilibrium - Vestibular Mechanisms
Functions of Brain Stem Nuclei in Controlling Subconscious, Stereotyped Movements