Role of the Brain Stem in Controlling Motor Function

The brain stem consists of the medulla, pons, and mes-encephalon.

Role of the Brain Stem in Controlling Motor Function

The brain stem consists of the medulla, pons, and mes-encephalon. In one sense, it is an extension of thespinal cord upward into the cranial cavity, because it contains motor and sensory nuclei that perform motor and sensory functions for the face and head regions in the same way that the spinal cord performs these func-tions from the neck down. But in another sense, the brain stem is its own master because it provides many special control functions, such as the following:

4. Control of many stereotyped movements of the body

Finally, the brain stem serves as a way station for “command signals” from higher neural centers. In the following sections, we discuss the role of the brain stem in controlling whole-body movement and equilibrium. Especially important for these purposes are the brain stem’s reticular nuclei and vestibular nuclei.

Figure 55–7 shows the locations of the reticular and vestibular nuclei in the brain stem. 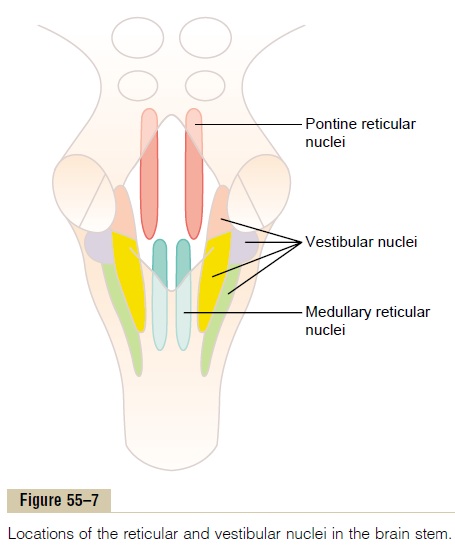 The reticular nuclei are divided into two major groups:

(1) pontine reticular nuclei, located slightly posteriorly and laterally in the pons and extending into the mes-encephalon, and (2) medullary reticular nuclei, which extend through the entire medulla, lying ventrally and medially near the midline. These two sets of nuclei function mainly antagonistically to each other, with the pontine exciting the antigravity muscles and the medullary relaxing these same muscles.

Pontine Reticular System. The pontine reticular nucleitransmit excitatory signals downward into the cord through the pontine reticulospinal tract in the anterior column of the cord, as shown in Figure 55–8. The fibers of this pathway terminate on the medial anterior motor neurons that excite the axial muscles of the body, which support the body against gravity—that is, the muscles of the vertebral column and the extensor muscles of the limbs. 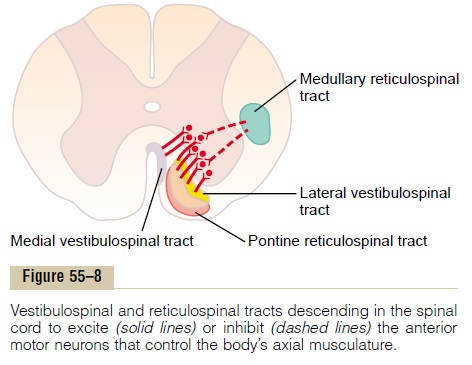 The pontine reticular nuclei have a high degree of natural excitability. In addition, they receive strong excitatory signals from the vestibular nuclei, as well as from deep nuclei of the cerebellum. Therefore, when the pontine reticular excitatory system is unopposed by the medullary reticular system, it causes powerful excitation of antigravity muscles throughout the body, so much so that four-legged animals can be placed in a standing position, supporting the body against gravity without any signals from higher levels of the brain.

Yet some signals from higher areas of the brain can “disinhibit” the medullary system when the brain wishes to excite the pontine system to cause standing. At other times, excitation of the medullary reticular system can inhibit antigravity muscles in certain por-tions of the body to allow those portions to perform special motor activities. The excitatory and inhibitory reticular nuclei constitute a controllable system that is manipulated by motor signals from the cerebral cortex and elsewhere to provide necessary background muscle contractions for standing against gravity and to inhibit appropriate groups of muscles as needed so that other functions can be performed.

The specific role of the vestibular nuclei, however, is to selectively control the excitatory signals to the dif-ferent antigravity muscles to maintain equilibrium inresponse to signals from the vestibular apparatus.

When the brain stem of an animal is sectioned below the midlevel of the mesencephalon, but the pontine and medullary reticular systems as well as the vestibular system are left intact, the animal develops a condition called decerebrate rigidity. This rigidity does not occur in all muscles of the body but does occur in the anti-gravity muscles—the muscles of the neck and trunk and the extensors of the legs.

The cause of decerebrate rigidity is blockage of nor-mally strong input to the medullary reticular nuclei from the cerebral cortex, the red nuclei, and the basal ganglia. Lacking this input, the medullary reticular inhibitor system becomes nonfunctional; full overactiv-ity of the pontine excitatory system occurs, and rigidity develops. We shall see later that other causes of rigidity occur in other neuromotor diseases, especially lesions of the basal ganglia.

Transmission of Signals from the Motor Cortex to the Muscles
Incoming Fiber Pathways to the Motor Cortex
Red Nucleus Serves as an Alternative Pathway for Transmitting Cortical Signals to the Spinal Cord
“Extrapyramidal” System
Excitation of the Spinal Cord Motor Control Areas by the Primary Motor Cortex and Red Nucleus
Role of the Brain Stem in Controlling Motor Function
Support of the Body Against Gravity- Roles of the Reticular and Vestibular Nuclei
Vestibular Apparatus
Function of the Utricle and Saccule in the Maintenance of Static Equilibrium
Detection of Head Rotation by the Semicircular Ducts
Vestibular Mechanisms for Stabilizing the Eyes
Other Factors Concerned with Equilibrium - Vestibular Mechanisms
Functions of Brain Stem Nuclei in Controlling Subconscious, Stereotyped Movements