Detection of Head Rotation by the Semicircular Ducts

Detection of Head Rotation by the Semicircular Ducts

When the head suddenly begins to rotate in any direction (called angular acceleration), the endolymph in the semicircular ducts, because of its inertia, tends to remain stationary while the semicircular ducts turn. This causes relative fluid flow in the ducts in the direc-tion opposite to head rotation.

Figure 55–12 shows a typical discharge signal from a single hair cell in the crista ampullaris when an animal is rotated for 40 seconds, demonstrating that (1) even when the cupula is in its resting position, the hair cell emits a tonic discharge of about 100 impulses per second; (2) when the animal begins to rotate, the hairs bend to one side and the rate of discharge increases greatly; and (3) with continued rotation, the excess discharge of the hair cell gradually subsides back to the resting level during the next few seconds.

The reason for this adaptation of the receptor is that within the first few seconds of rotation, back resistance to the flow of fluid in the semicircular duct and past the bent cupula causes the endolymph to begin rotat-ing as rapidly as the semicircular canal itself; then, in another 5 to 20 seconds, the cupula slowly returns to its resting position in the middle of the ampulla because of its own elastic recoil. 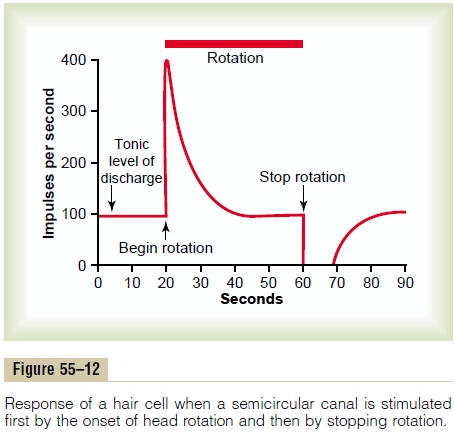 When the rotation suddenly stops, exactly opposite effects take place: The endolymph continues to rotate while the semicircular duct stops. This time, the cupula bends in the opposite direction, causing the hair cell to stop discharging entirely. After another few seconds, the endolymph stops moving and the cupula gradually returns to its resting position, thus allowing hair cell discharge to return to its normal tonic level, as shown to the right in Figure 55–12. Thus, the semicircular duct transmits a signal of one polarity when the head begins to rotate and of opposite polarity when it stops rotating.

We can explain the function of the semicircular ducts best by the following illustration: If a person is running forward rapidly and then suddenly begins to turn to one side, he or she will fall off balance a frac-tion of a second later unless appropriate correctionsare made ahead of time. But the maculae of the utricle and saccule cannot detect that he or she is off balance until after this has occurred. The semicircular ducts, however, will have already detected that the person is turning, and this information can easily apprise the central nervous system of the fact that the person will fall off balance within the next fraction of a second or so unless someanticipatory correction is made.

In other words, the semicircular duct mechanism predicts that dysequilibrium is going to occur andthereby causes the equilibrium centers to make appro-priate anticipatory preventive adjustments. In this way, the person need not fall off balance at all before he or she begins to correct the situation.

Removal of the flocculonodular lobes of the cere-bellum prevents normal detection of semicircular duct signals but has less effect on detecting macular signals. It is especially interesting that the cerebellum serves as a “predictive” organ for most rapid movements of the body, as well as for those having to do with equi-librium.

Excitation of the Spinal Cord Motor Control Areas by the Primary Motor Cortex and Red Nucleus
Role of the Brain Stem in Controlling Motor Function
Support of the Body Against Gravity- Roles of the Reticular and Vestibular Nuclei
Vestibular Apparatus
Function of the Utricle and Saccule in the Maintenance of Static Equilibrium
Detection of Head Rotation by the Semicircular Ducts
Vestibular Mechanisms for Stabilizing the Eyes
Other Factors Concerned with Equilibrium - Vestibular Mechanisms
Functions of Brain Stem Nuclei in Controlling Subconscious, Stereotyped Movements
Cerebellum and Its Motor Functions
Anatomical Functional Areas of the Cerebellum
Neuronal Circuit of the Cerebellum
Function of the Cerebellum in Overall Motor Control