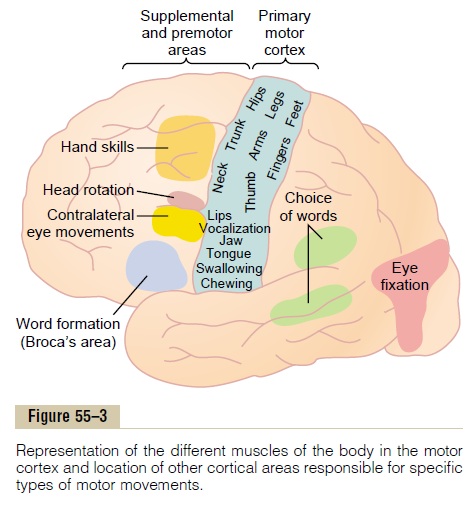 These regions have been localized either by electrical stimulation or by noting the loss of motor function when destructive lesions occur in specific cortical areas. Some of the more important regions are the following.

Broca’s Area and Speech. Figure 55–3 shows a premotorarea labeled “word formation” lying immediately anterior to the primary motor cortex and immediately above the sylvian fissure. This region is called Broca’sarea. Damage to it does not prevent a person fromvocalizing, but it does make it impossible for the person to speak whole words rather than uncoordi-nated utterances or an occasional simple word such as “no” or “yes.” A closely associated cortical area also causes appropriate respiratory function, so that respi-ratory activation of the vocal cords can occur simulta-neously with the movements of the mouth and tongue during speech. Thus, the premotor neuronal activities related to speech are highly complex.

“Voluntary” Eye Movement Field. In the premotor areaimmediately above Broca’s area is a locus for control-ling voluntary eye movements. Damage to this area prevents a person from voluntarily moving the eyes toward different objects. Instead, the eyes tend to lock involuntarily onto specific objects, an effect controlled by signals from the occipital visual cortex. This frontal area also controls eyelid movements such as blinking.

This area is closely associated with the eye movement field; it directs the head toward different objects.

Area for Hand Skills. In the premotor area immediatelyanterior to the primary motor cortex for the hands and fingers is a region neurosurgeons have identified as important for “hand skills.” That is, when tumors or other lesions cause destruction in this area, hand movements become uncoordinated and nonpurpose-ful, a condition called motor apraxia.