A number of such tests shall be discussed here briefly with specific examples wherever possible and necessary :

In actual practice, it has been observed that different official compendia describe a number of detailed types of tests with a view to obtain a constant and regular check that might be possible to maintain the desired degree of optimum purity both in the pure pharmaceutical substances and the respective dosage-forms made therefrom.

A number of such tests shall be discussed here briefly with specific examples wherever possible and necessary :

The limits of insoluble matter present in pharmaceutical substances and stated in various official com-pendia are given below :

In the same vein, tests for clarity of solution offer another means of limiting insoluble parent drug sub-stances in their correspondingly more highly water-soluble derivatives.

In order to detect the presence of some very specific impurities normally present in the official substances the limits of soluble impurities have been laid down in different pharmacopoeias. Some typical examples are cited below : 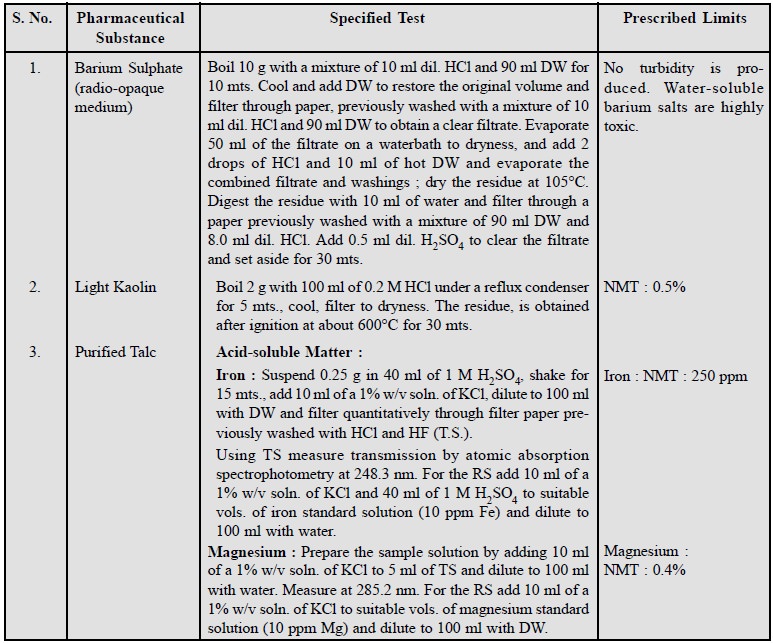 A good number of pharmaceutical substances usually absorb moisture on storage thereby causing deterioration. Such an anomaly can be safely restricted and limited by imposing an essential requirement for the loss in weight (Loss on Drying) when the pharmaceutical chemical is subjected to drying under specified conditions. The quantum of heat that may be applied to the substance varies widely as per the following norms :

(a) Nature of the substance

(b) Decomposition characterisics of the substance.

Various official compendia recommended different temperatures and duration of drying either at atmos-pheric or reduced pressure (vacuum). A few typical examples are stated below : 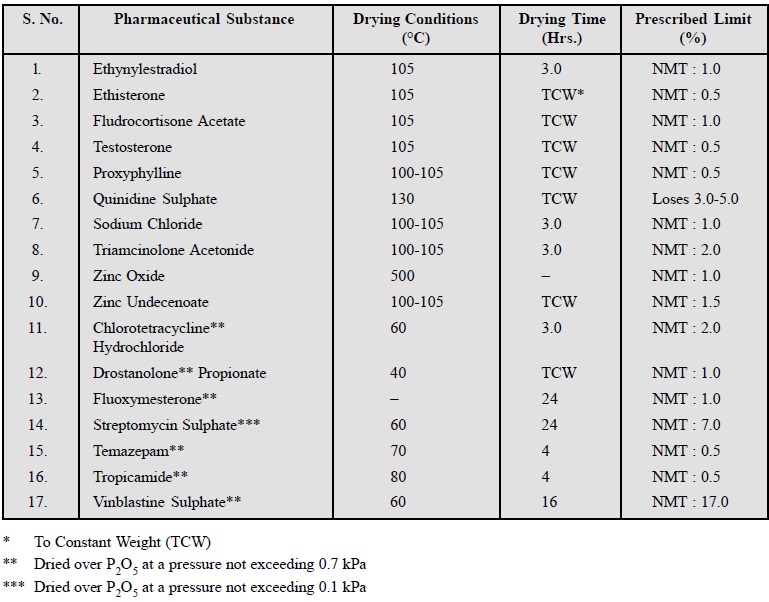 There are four types of hydrates which may be observed amongst the pharmaceutical chemicals, namely :

These substance either lose all or part of their water of crystallization on drying which sometimes attains a considerable value as could be seen in the following data : 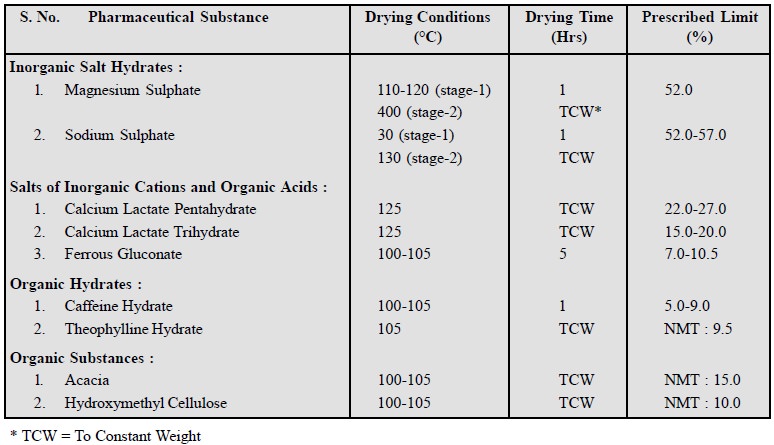 Since the introduction of Gas-Liquid-Chromatography (GLC) as an essential analytical tool, it has been judiciously exploited as an useful alternative means for not only determining water content in pharmaceutical chemicals but also limiting specific volatile substances present in them. It may be expatiated with the help of the following examples :

Procedure : Carry out the method for gas chromatography employing the following solutions

The chromatographic procedure may be carried out by employing :

(b)  Helium as the carrier gas.

(c) A Thermal Conducting Detector (TCD) maintained at 150°C. From the chromatograms obtained and taking into account any water detectable in solution

The chromatographic procedure may be performed using a glass column (1.5 × 4 mm) packed with porous polymer beads (80 to 100 mesh) e.g., Porapack-Q and maintained at 140°C.

Calculate the percentage w/v of methanol taking 0.792 as its weight per ml at 20°C.

5. Limits of Residue on Ignition

In fact, the limits of residue on ignition are basically applicable to the following two categories of pharmaceutical substances, namely :

(a) Those which are completely volatile when ignited e.g., Hg.

(b) Those which undergo total decomposition thereby leaving a residue with a definite composition e.g., calamine—a basic zinc carbonate that gives rise to ZnO as the residue.

According to BP, 68.0 to 74.0% when ignited at a temperature not lower than 900°C until, after further ignition, two successive weighings do not differ, by more than 0.2% of the weight of the residue.

6. Limits of Loss on Ignition

Official compendia include the limits of ‘loss on ignition’ which is generally applied to relatively stable pharmaceutical substances that are likely to contain thermolabile impurities. A few typical examples are stated below :

These values would be explained with the help of some typical examples stated below :

Ash value normally designates the presence of inorganic salts e.g., calcium oxalate found naturally in the drug, as well as inorganic matter derived from external sources. The official ash values are of prime importance in examination of the purity of powdered drugs as enumerated below :

(i) To detect and check adulteration with exhausted drugs e.g., ginger.

(ii) To detect and check absence of other parts of the plant e.g., cardamom fruit.

(iii) To detect and check adulteration with material containing either starch or stone cells that would modify the ash values.

(iv) To ensure the absence of an abnormal proportion of extraneous mineral matter incorporated acciden-tally or due to follow up treatment or due to modus operandi at the time of collection e.g., soil, floor sweepings and sand.

The most common procedure recommended for crude drugs is described below :

Procedure : Incinerate 2 to 3 g of the ground drug in a tared platinum or silica dish at a temperature not exceeding 450°C until free from carbon. Cool and weigh. If a carbon-free ash cannot be obtained in this way, exhaust the charred mass with hot water (DW), collect the residue on an ashless filter paper, incinerate the residue and filter paper, add the filtrate, evaporate to dryness and ignite at a temperature not exceeding 450°C. Calculate the percentage of ash with reference to the air-dried drug.

·              Offers variable results upon ashing based on the conditions of ignition.

Hence, the treatment of the ‘total ash’ with acid virtually leaves silica exclusively and thus comparatively forms a better test to detect and limit excess of soil in the drug than does the ash.

The common procedure usually adopted for the determination of ‘acid insoluble ash’ is given below :

Procedure : Place the ash, as described earlier, in a crucible, add 15 ml DW and l0 ml hydrochloric acid ( ~– 11.5 N), cover with a watch-glass, boil for 10 minutes and allow to cool. Collect the insoluble matter on an ashless filtre paper, wash with hot DW until the filtrate is neutral, dry, ignite to dull redness, allow to cool in a desiccator and weigh. Repeat until the difference between two successive weighings is not more than l mg. Calculate the percentage of acid-insoluble ash with reference to the air-dried drug.

A few typical examples are listed below : 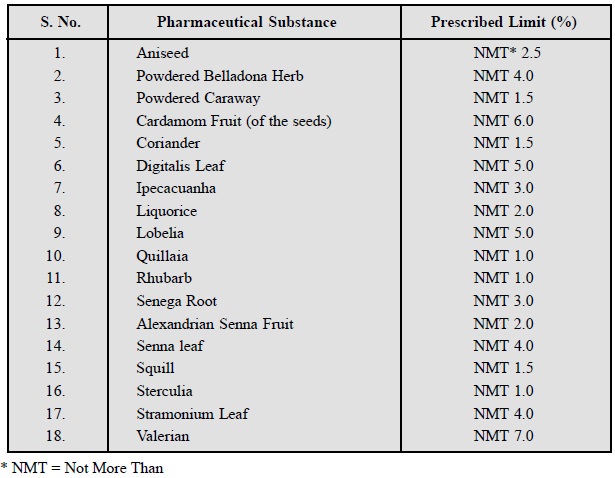 The estimation of ‘sulphated ash’ is broadly employed in the case of :

The general method for the determination of ‘sulphated ash’ is enumerated below :

Procedure : Heat a silica or platimum crucible to redness for 30 minutes, allow to cool in a desiccator and weigh. Place a suitable quantity of the substance being examined, accurately weighed in the crucible, add 2 ml of 1 M sulphuric acid and heat, first on a waterbath and then cautiously over a flame to about 600°C. Continue heating until all black particles have disappeared and then allow to cool. Add a few drops of 1 M sulphuric acid, heat to ignition as before and allow to cool. Add a few drops of a 16% solution of ammonium carbonate, evaporate to dryness and cautiously ignite. Cool, weigh, ignite for 15 minutes and repeat the procedure to constant weight.

Following are the examples to depict the ‘sulphated ash’ present in various official pharmaceutical chemicals : 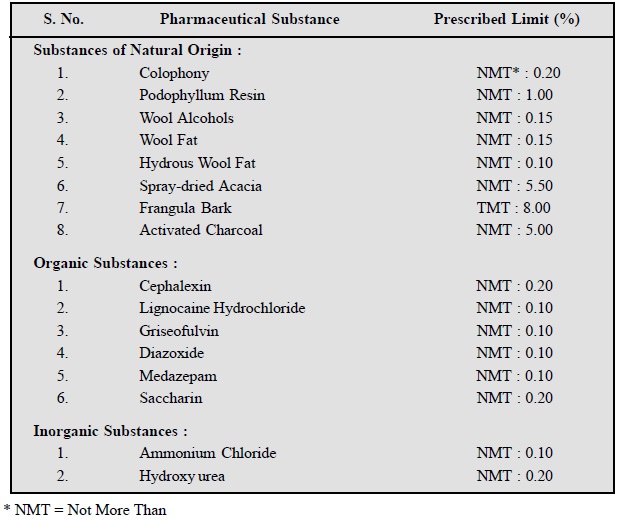 Water-soluble ash is specifically useful in detecting such samples which have been extracted with water.

A detailed procedure as per the official compendium is enumerated below :

Procedure : The ash as described earlier, is boiled for 5 minutes with 25 ml DW, collect the insoluble matter in a sintered-glass crucible or on an ashless filter paper, wash with hot DW and ignite for 15 minutes at a temperature not exceeding 450°. Subtract the weight of the residue thus obtained from the weight of the ash.The difference in weight represents the water-soluble ash. Now, calculate the percentage of water-soluble ash with reference to the air-dried drug.

A typical example of an official drug is that of ‘Ginger’, the water-soluble ash of which is found to be not more than 6.0%.