Theory : The official process is a development of the Gutzeit Test wherein all arsenic present is duly converted into arsine gas (AsH3) by subjecting it to reduction with zinc and hydrochloric acid.

Theory : The official process is a development of the Gutzeit Test wherein all arsenic present is duly converted into arsine gas (AsH3) by subjecting it to reduction with zinc and hydrochloric acid. Further, it depends upon the fact that when arsine comes into contact with dry paper permeated with mercuric (Hg2+) chloride it produces a yellow strain, the intensity of which is directly proportional to the quantity of arsenic present. The various chemical reactions involved may be expressed by the following equations :

The details of experimental procedure described in the Pharmacopoeia are actually based upon a paper by Hill and Collins**, but have been adequately modified from time to time in accordance with the accumu-lated and acquired experience. Explicitly, the expressions provided in the Pharmacopoeia for limits of arsenic exclusively refer to parts per million, calculated as As. 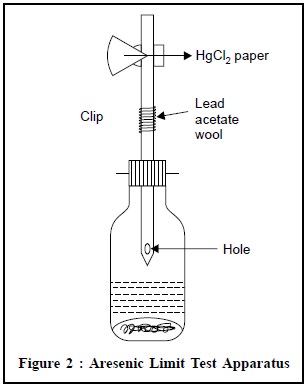 A wide-mouthed glass bottle capable of holding about 120 ml is fitted with a rubber bung through which passes a glass tube. The latter, made from ordinary glass tubing, has a total length of 200 mm and an internal diameter of exactly 6.5 mm (external diameter about 8 mm). It is drawn out at one end to a diameter of about 1 mm and a hole not less than 2 mm in diameter is blown in the side of the tube, near the constricted part. When the bung is inserted in the bottle containing 70 ml of liquid, the constricted end of the tube is kept above the surface of the liquid, and the hole in the side is below the bottom of the bung. The upper end of the tube is cut off square, and is either slightly rounded or ground smooth.

The rubber bungs (about 25 mm × 25 mm), each with a hole bored centrally and through exactly 6.5 mm  in diameter,are fitted with a rubber band or spring clip for holding them tightly in place.

Procedure : The glass tube is lightly packed with cotton wool, previously moistened with lead acetate solution and dried, so that the upper surface of the cotton wool is not less than 25 mm below the top of the tube. The upper end of the tube is then inserted into the narrow end of one of the pair of rubber bungs, to a depth of l0 mm (the tube must have a rounded-off end). A piece of mercuric chloride paper is placed flat on the top of the bung and the other bung placed over it and secured by means of the spring clip in such a manner that the holes of the two bungs meet to form a true tube 6.5 mm diameter interrupted by a diaphragm of mercuric chloride paper.

The test solution prepared as specified, is placed in the wide-mouthed bottle, 1 g of KI (AsT) and 10 g of Zn (AsT) are added, and the prepared glass tube is placed quickly in position. The reaction is allowed to proceed for 40 minutes. The yellow stain that is produced on the HgCl2 paper if As is present is compared by daylight with the standard stains obtained by performing in an identical manner with known quantities of dilute arsenic solution (AsT). The comparison of the stains is made immediately at the completion of the test.

(ii) The standard and test stains must be compared immediately as they fade out on retaining.

(iii) The reaction may be expedited by the application of heat and 40°C is considered to be the most ideal temperature.

(iv) The tube should be washed with HCl (AsT), rinsed with DW, and dried between successive tests.

Special Techniques : The special techniques are usually applicable to a host of pharmaceutical sub-stances before the normal test can be performed. A few typical examples would be discussed briefly here, namely :

(i) Free Acids : They are first converted to their respective sodium salts with Na2CO3 and As3+ oxi-dised to As5+ by evaporating the solution with Br2. The residue is ignited carefully until carbonised to destroy organic matter, while As is kept as non-volatile sodium arsenate. The resulting residue is dissolved in brominated HCl and the test carried out in the normal manner.

(ii) Substances Reacting Vigorously with HCl : The As is readily converted to AsCl3 which being volatile in nature is also carried off along with relatively large volumes of CO2 (generated by the substance and HCl).

(iii) Insoluble Substances : These substances, as those that do not interfere with the solution of As and its subsequent reduction to AsH3 (arsine). Such substances are suspended in water along with stannated-HCl, and the normal test is performed.

(a) Iron : It gets deposited on the surface of Zn thereby depressing the intensity of reaction between Zn and HCl to produce H2.

Remedy : The sample is dissolved in H2O and stannated HCl to allow conversion of all As to As3+ and finally as AsCl3. The latter being volatile in nature can be separated by distillation from remaining metallic salts and the distillate examined in the normal manner.

(b) Antimony : Sb-compounds are also reduced simultaneously by Zn/HCl to yeild SbH3 (stilbine) that reacts with HgCl2 paper to give a stain. Therefore, the sample is first distilled with HCl to yield a distillate containing all the As as AsC3 (volatile), but yields only a fraction of Sb as SbCl3 (non-volatile). A repeated distillation obviously gets rid of even the last traces of Sb.

A few typical examples are cited below from the official compendium. 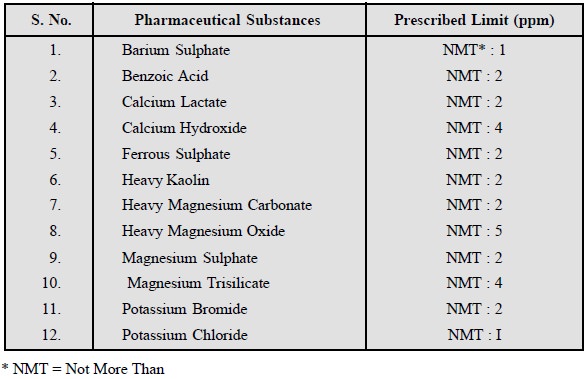 Theory : The limit test for Iron is based on the reaction between iron and thioglycollic acid in a medium buffered with ammonium citrate to give a purple colour, which is subsequently compared with the standard colour obtained with a known amount of iron (0.04 mg of Fe). Ferrous thioglycollate is a co-ordination compound that attributes the purple colour ; besides thioglycollic acid converts the entire Fe3+ into Fe2+. The reactions involved may be expressed as follows :

Standard Iron Solution : Weigh accurately 0.1726 g of ferric ammonium sulphate and dissolve in 10 ml of 0.1 N sulphuric acid and suffcient water to produce 1 Litre. Each ml of this solution contains 0.02 mg of Fe.

Standard Colour : Dilute 2.0 ml of standard iron solution with 40 ml DW in a Nessler cylinder. Add 2 ml of a 20% w/v solution of iron-free citric acid and 0.1 ml of thioglycollic acid, mix, make alkaline with iron-free ammonia solution, dilute to 50 ml with DW and allow to stand for 5 minutes.

Procedure : Dissolve the specified quantity of the substance being examined in 40 ml DW, and trans-fer to a Nessler cylinder. Add to it 2 ml iron-free citric acid solution and 0.1 ml thioglycollic acid, mix, make alkaline with iron-free ammonia solution, dilute to 50 ml with DW and allow to stand for 5 minutes. Any colour produced is not more intense than the standard colour.

Some examples of this test for pharmaceutical substances are listed below : 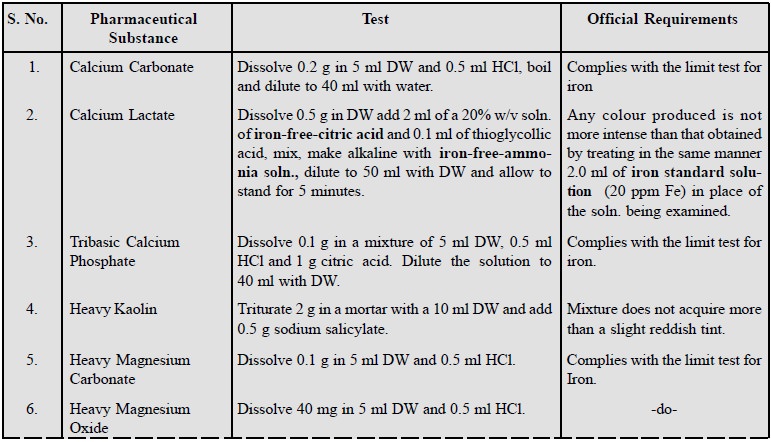 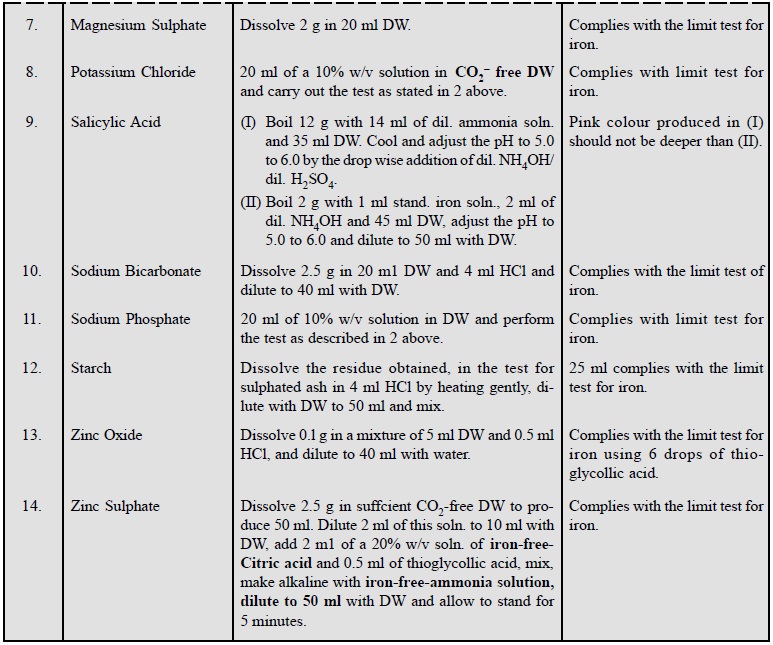