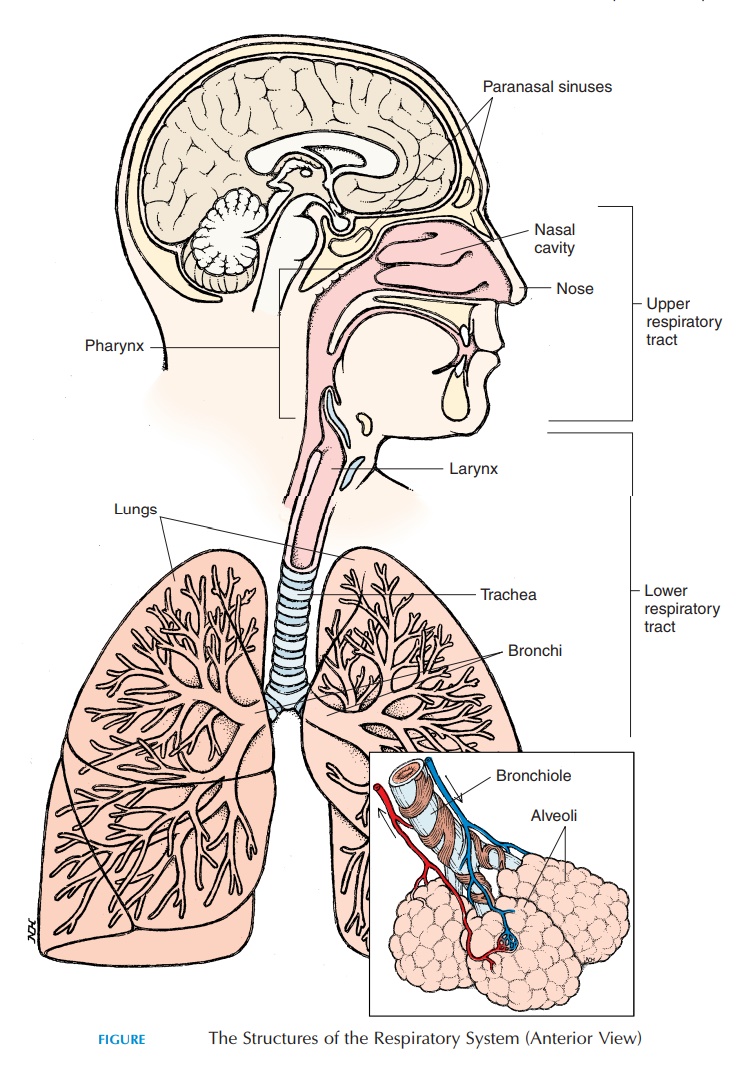 The Anatomy of the Respiratory System 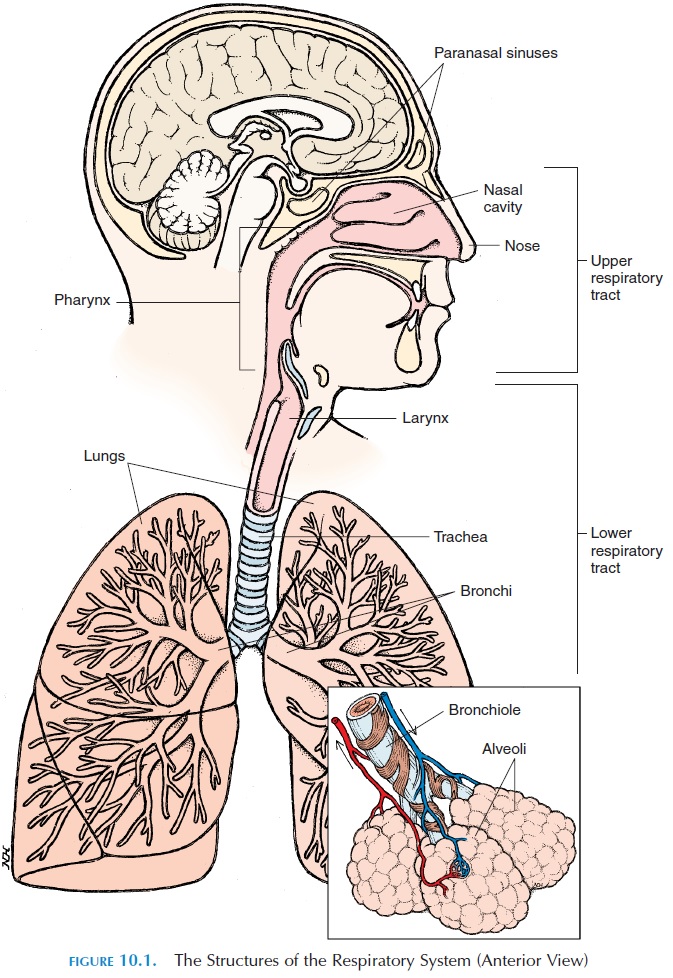 The Nose and Nasal Cavity

The air that reaches the lungs enters the body through the nose. The external part of the nose is made up of bone, hyaline cartilage, muscle, adipose tissue, and skin and is lined internally by mucous membrane. The superior part of the nose is bony; made up of the frontal, nasal, and maxillary bones. The inferior part is cartilaginous and more flexible. The openings on the inferior aspect of the nose are known as the nostrils, or external nares. The nostrils open internally into a wider area known as the nasal cavity (see Figure 10.2). The nasal cavity is divided into the right and the left regions by the nasal septum. The anterior and in-ferior portion of the nasal septum is made of hyaline cartilage (feel it); the superior part is made up of bone. Inferiorly, the nasal cavity is separated from the oral cavity by the maxillary and palatine bones; this is thehard palate, the hard portion of the roof of themouth. From the posterior part of the hard palate, a fleshy partition—the soft palate—separates the phar-ynx into thenasopharynx and oropharynx. 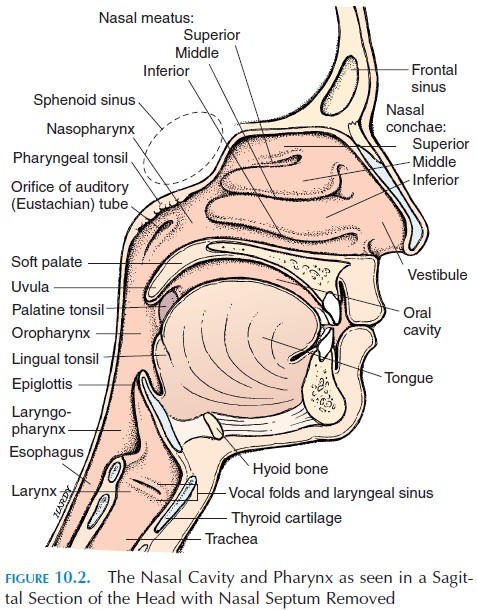 The first portion of the nasal cavity widens into the vestibule, which is the part seen when looking up thenostrils. This region is covered with coarse hair that extends across the nostrils and helps prevent larger particles, such as sand and sawdust, from entering the nasal cavity.

The nasal cavity is divided into smaller chambers by three, irregular, shelflike projections from the lat-eral wall of the nose known as the superior, middle, and inferior conchae. The air passes through the passages—the superior, middle, and inferior mea-tus—that are present between the conchae. The me-andering, turbulent pathway for air created by the conchae helps churn the air that has entered and en-ables large particles to stick to the mucus lining, slowing entry and providing sufficient time for the air to be altered to the body temperature and become saturated with water. In addition, the eddy produced carries air to the superior region of the nasal cavity where the smell receptors (olfactory receptors) are located. The posterior part of the nasal cavity opens into the pharynx through the internal nares.

Other than the external and internal nares, the nasal cavity has many other openings. The nasolacrimalduct—the tear duct that opens into the nose from theconjunctiva of the eye. This is the reason why the nose becomes “leaky” when a person cries. The tears that en-ter the nose keep the cavity moist. The openings of the paranasal sinus are located in the nose.

The nasal epithelium, or mucosa, is suited to clean the air that enters the nasal cavity and to bring it to body temperature and humidity. As mentioned, coarse hair prevents large particles from entering. The epithelium is a stratified squamous type that can withstand abrasion and friction. Then the epithelium changes to pseudostratified ciliated columnar ep-ithelium. The cilia, tiny hairlike projections on thecell membrane, move rhythmically in one direction. 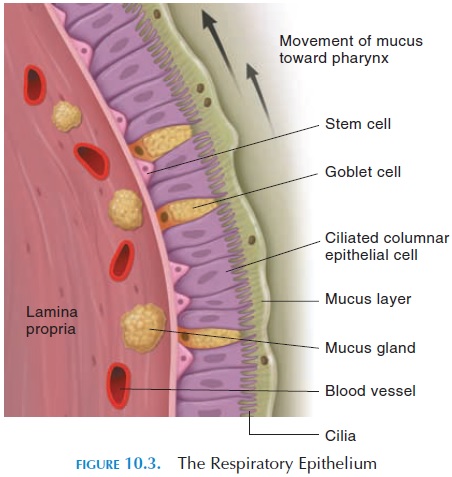 Interspersed among the ciliated columnar cells are goblet cells, which secrete a sticky mucus (see Figure10.3). The cilia of the epithelium help move the mu-cus, together with any adhering dust and pathogens, toward the back of the nose. The movement of the cilia and mucus, similar to the movement of a con-veyor belt, is sometimes referred to as the mucous es-calator. From the back of the nose, the mucus enters the pharynx and is eventually swallowed.

The connective tissue lining the epithelium (lam-ina propria) contains many mucous glands, whichsecrete mucus into the nasal cavity, and a large net-work of blood vessels. These vessels help bring warm blood close to the surface. This mechanism helps warm and humidify the cool, dry air that enters. This process is important because the body can lose a lot of heat and moisture via the breathed air. Lower animals, such as dogs, use this mechanism for cooling the body by panting.

The superior part of the nasal cavity has specialized tissue that contains the nerve endings of the first cra-nial nerve—the olfactory nerve. These nerve endings, receptors for the sense of smell, are located along the superior nasal conchae, the superior portion of the nasal septum, and the inferior part of the cribriform plate (see Figure 10.4). The receptors are stimulated by chemicals in the air that dissolve in the mucous 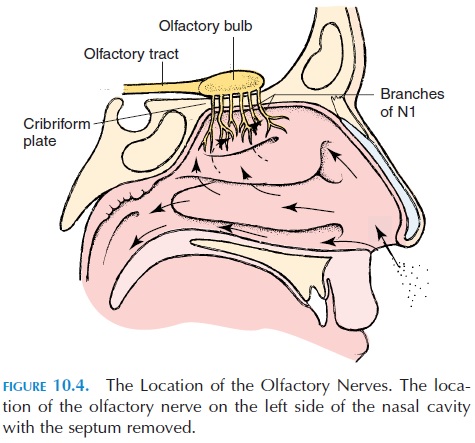 secretion. The olfactory nerves penetrate the tiny openings in the cribriform plate and carry the sense of smell to the brain. To get a better sense of a smell, we sniff forcefully to draw air in and reach the por-tion of the nasal cavity that houses the olfactory ep-ithelium .

The paranasal sinus (see Figure 10.5), or air cells of the nose, are cavities present in the lateral and supe-rior walls of the nasal cavity. The sphenoid sinus— located posteriorly and superiorly—are closely re-lated to the pituitary gland; therefore, the pituitary gland is often approached for surgery through the nasal cavity and the sphenoid sinus. The paired max-illary sinus are located in the maxillary bones. Themaxillary sinus have a greater tendency to become inflamed (sinusitis) because the sinus opening to the nasal cavity is located closer to the roof of the sinus (rather than the floor), making drainage more diffi-cult. There are many ethmoid sinus located in the ethmoid bone in the superior and posterior part of the nasal cavity. The frontal sinus are located deep to the medial part of the eyebrows. All of these sinus are air-filled cavities that communicate with the nasal cavity, and they are lined by the same epithelium as the rest of the nasal cavity. 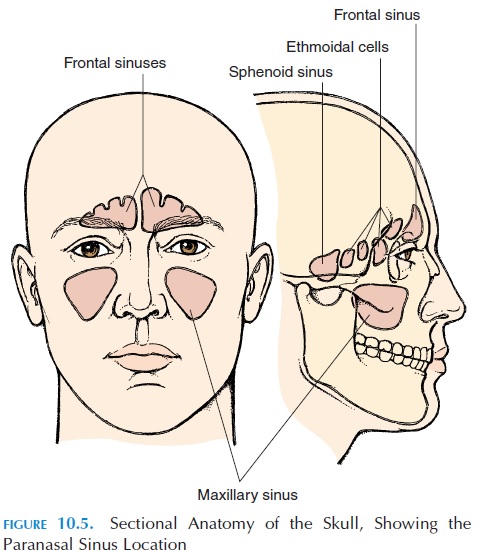 The sinus help humidify and heat the air that en-ters the body. In addition, they lighten the weight of the head. The resonance produced as a result of their presence gives the voice its specific characteristics.

The region that extends between the posterior part of the nasal cavity—the internal nares and the larynx—is known as the pharynx (Figure 10.2). Both the respira-tory and digestive systems share part of this region. The superior wall of the pharynx is in close contact with the axial skeleton; the lateral walls are muscular. The pharynx is divided into three parts: the na-sopharynx, the oropharynx, and the laryngophar-ynx (Figures 10.1 and 10.2).

The nasopharynx region extends between the internal nares and the soft palate and lies superior to the oral cavity. Some lymphoid tissue—the pharyngeal tonsils or theadenoids—are located in the posterior wall.

The Eustachian tubes, or auditory tubes, which connect the middle ear to the pharynx, open into the nasopharynx. The opening opens and closes, equaliz-ing the air pressure in the middle ear to that of the at-mosphere. This is needed for proper conduction of sound.

The oropharynx is the region of the pharynx that is common for the passage of food and air. This region lies between the soft palate and the base of tongue. The epithelium lining the oropharnyx changes from the delicate, pseudostratified ciliated columnar of the nasopharynx to the rugged, stratified squamous ep-ithelium because there is scope for abrasion and fric-tion from food. The posterior part of the tongue con-tains some lymphoid tissue—the lingual tonsils. The palatine tonsils are located to the side. Thus, thetonsils prevent passage of pathogens beyond this point.

The inferior most region of the pharynx is the laryn-gopharynx. The larynx is located anterior to the laryngopharynx.