Given the difference in partial pressure of oxygen and its solubility coefficient, only about 0.3 mL (0.02 in3) of oxygen can be transported dissolved in 100 mL (6.1 in3) of plasma.

As already mentioned, the solubility coefficient of oxygen is low. Given the difference in partial pressure of oxygen and its solubility coefficient, only about 0.3 mL (0.02 in3) of oxygen can be transported dissolved in 100 mL (6.1 in3) of plasma. This is grossly insuffi-cient for the tissue. With carbon dioxide, much more is produced in the tissue than can be carried dissolved in plasma. Hence, a more efficient mechanism is needed to transport the gases. Hemoglobin, present in red blood cells, with its great affinity for oxygen, en-ables blood to carry a larger quantity of the gases.

The primary function of a red blood cell is to trans-port oxygen and carbon dioxide, and its structure is modified to suit this function. As red blood cells ma-ture, all cellular components not directly related to function are lost. For example, mature red cells do not have a nucleus. Ninety-five percent of intracellu-lar protein in these cells is hemoglobin. The cell is small, about 7.4 µ, and shaped like a biconcave disk, with a narrow central part. This structure helps the cell squeeze through the tiny capillaries without rup-turing (see Figure 10.13). 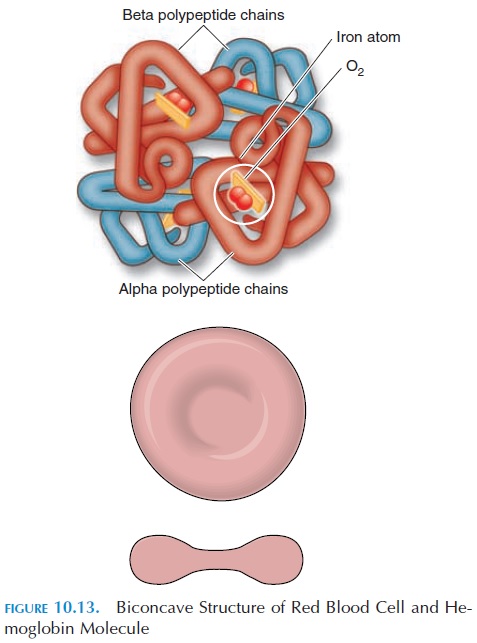 The hemoglobin molecule is made up of four globular protein chains, two alpha and two beta chains (Fig-ure 10.13). Each chain contains a pigment complex known as heme, which has an attached iron ion. The iron component of the hemoglobin molecule com-bines with oxygen to form oxyhemoglobin. The link-age of iron to oxygen is weak and can be easily broken in accordance with the oxygen concentration in the surrounding tissue. Each hemoglobin molecule is ca-pable of combining with four molecules of oxygen. There are approximately 280 million hemoglobin mol-ecules in each red blood cell and about 98.5% of the oxygen carried in the blood is bound to hemoglobin. 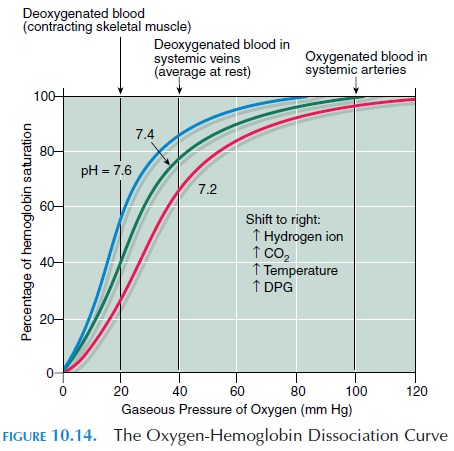 When the pH drops (i.e., becomes more acidic or the temperature increases slightly), the oxygen-hemoglobin dissociation curve is shifted to the right (Figure 10.14). Also, the accumulation of compound 2,3 diphosphoglycerate (2,3 DPG), which is formed plentifully during metabolism in the red blood cells, facilitates dissociation of oxygen from hemoglobin. This implies that hemoglobin gives up oxygen easily at a higher partial pressure of oxygen. In active tis-sue, the temperature increases slightly because of the increase in metabolism. The liberation of carbon dioxide and production of lactic acid make the envi-ronment more acidic. All of these factors—change in temperature, drop in pH, and accumulation of 2,3 DPG—alter the characteristic of hemoglobin, making it unload more oxygen even at a higher partial pres-sure of oxygen. In this way, the tissue increase oxygen availability according to their activity.

At high altitudes, the partial pressure of oxygen in the atmosphere is low, lowering the availability of oxygen in the air. The body adapts to the low levels by in-creasing red blood cells and hemoglobin content. This way, even if the hemoglobin molecules do not get saturated with oxygen, there are more in number to combine with oxygen. The increase in hemoglobin content and red blood cells is initiated by the hor-mone erythropoietin , whose levels in-crease when oxygen levels drop.

Carbon dioxide, a byproduct of aerobic metabolism, is transported in the blood in three ways that are re-versible (see Figure 10.15). Because it is about 20 times more soluble in blood than oxygen, about 7% of carbon dioxide dissolves in plasma. Twenty-three percent combine with hemoglobin to form car-baminohemoglobin. The remaining 70% are con-verted to carbonic acid in the presence of the enzyme carbonic anhydrase found inside red blood cells. The carbonic acid dissociates easily and rapidly into hy-drogen ions and bicarbonate ions.

Most hydrogen ions formed in this reaction bind to hemoglobin molecules. Thus, hemoglobin mole-cules serve as buffers, preventing these ions from al-tering the pH of blood. The bicarbonate ions move out of the red blood cells into the plasma in exchange for chloride ions, which move into the cells from the plasma (chloride shift). Because deoxygenated he-moglobin forms carbamino compounds more easily and has a greater affinity for hydrogen ions than oxy-genated hemoglobin, transport of carbon dioxide is facilitated in venous blood. 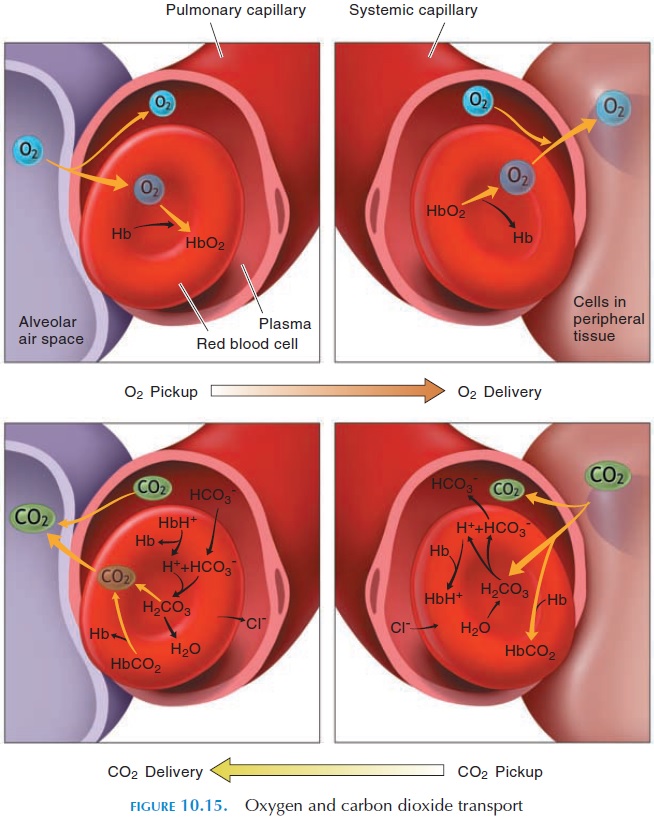