Having learned that the muscles involved in respiration are skeletal muscles, one might wonder how we are able to breathe rhythmically and regularly on a continuous basis.

Having learned that the muscles involved in respiration are skeletal muscles, one might wonder how we are able to breathe rhythmically and regularly on a continuous basis. At the same time, it is fascinating to consider the many ways the rate and depth of res-piration is altered in everyday activity.

Think of musicians who plays a wind instrument or the control singers have over the force of respira-tion. We can hold the breath for a short period, as in diving, but are forced to breathe involuntarily after some time. Breathing stops every time food is swal-lowed. The thought of an impending competition, makes us breathe faster. Without conscious effort, respiratory rate and depth alter, according to the oxy-gen requirements of the body. We breathe more heav-ily when we exercise, and our breathing is matched to the rate at which we use oxygen. All of these alter-ations are caused by complex regulatory mechanisms of respiration.

Tissue can alter oxygen delivery. In active tissue, the increase in temperature, drop in pH, and increase in the concentration gradient of oxygen between the in-terstitial fluid and blood promote the unloading of oxygen from hemoglobin. In addition, the smooth muscle of the arterioles supplying the tissue are re-laxed by an increase in hydrogen ions, change in potassium levels, and increase in carbon dioxide lev-els (all of which occur in rapidly metabolizing tissue). In this way, more blood is diverted to the tissue that needs oxygen.

In the lungs, pulmonary blood flow is increased to-ward those alveoli where partial pressure of oxygen is higher (i.e., toward well-ventilated alveoli). In this way, gas exchange is increased by avoiding collapsed alveoli. Note that this reaction is opposite that which occurs in the systemic capillaries. Also, the smooth muscle of the bronchi and bronchioles are sensitive to the partial pressure of carbon dioxide in the lungs and relax when carbon dioxide levels are high. This improves ventilation as the caliber of the bronchi in-crease in those areas of the lungs that are well per-fused by deoxygenated blood with a high carbon dioxide content. In addition to this type of local con-trol of perfusion and ventilation, the brain controls the rate and depth of respiration.

RESPIRATORY CONTROL SYSTEM OF THE BRAIN

In brief, spontaneous respiration is produced by rhythmic discharge of impulses from the respiratory area of the brain (see Figure 10.16) via motor nerves to the respiratory muscles. Breathing will stop if the connection from the brain to the motor nerves is sev-ered. However, the rhythmic discharge of impulses from the brain can be altered by many factors such as changing levels of oxygen, carbon dioxide, and hy-drogen ions (pH) of the blood. This explains the in-crease in respiration when active. Also, the nervous connections of the respiratory area with other re-gions of the brain and with other parts of the body af-fect the rate of discharge of impulses. This explains how respiration can be altered voluntarily, as in singing, involuntarily before and during exercise, and in many other situations. 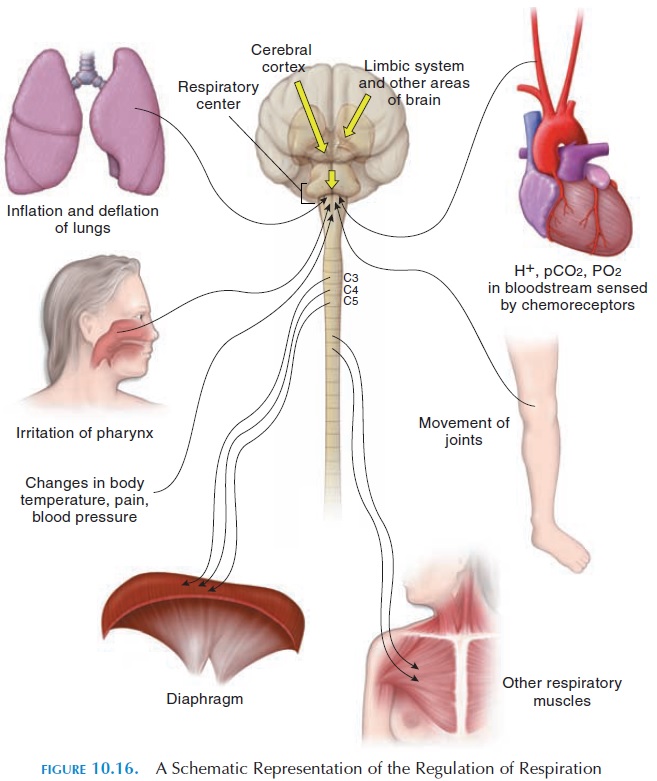 Respiration is controlled by two separate neural mechanisms. One voluntary and one involuntary. Nerves from the cerebral cortex communicate with the motor neurons that directly innervate the di-aphragm and the other respiratory muscles. This is responsible for the voluntary component. Other areas of the brain—classically referred to as the respira-tory centers—located in the medulla and pons areresponsible for the involuntary or automatic compo-nent. They, too, communicate with the motor neu-rons supplying the respiratory muscles. The final out-come or action depends on whether the motor nerves are inhibited or stimulated.

Three areas in the brainstem participate in the regu-lation of respiration. These centers are actually a net-work of neurons, with their cell bodies located in the medulla and pons.

The medulla has the respiratory rhythmic center.

This center has two groups of neurons. One group is situated dorsally—the dorsal respiratory group— and contains neurons that control the motor neurons that supply the diaphragm and the external inter-costal muscles. During quiet respiration, these neu-rons are active for about 2 seconds, stimulating the muscles and resulting in inspiration. Then they be-come inactive for about 3 seconds when the muscles relax and expiration occurs passively.

Another group of neurons in the medulla, situated ventrally, the ventral respiratory group, is active dur-ing forced respiration. They communicate with the motor neurons that innervate the accessory respira-tory muscles and stimulate the accessory muscles dur-ing inspiration and expiration. The neurons involved in inspiration and expiration are reciprocally inner-vated (i.e., when the inspiratory neurons are active, the expiratory neurons are inhibited simultaneously).

The pons has collections of neurons known as the pneumotaxic center and apneustic center. Bothadjust the output of the respiratory rhythmic centers of the medulla. They adjust the rate and depth of res-piration in response to stimuli received from other parts of the brain and the rest of the body. For exam-ple, the pneumotaxic center reduces the duration of inspiration and facilitates the onset of expiration. The primary effect of this center is to stop inspiration before the lungs are over inflated. When this center is active, the respiratory rate is increased. The ap-neustic center has the opposite effect, increasing the duration of inspiration and inhibiting expiration.

The level of oxygen, carbon dioxide and hydrogen ions can alter respiration. This alteration is a result of special receptors that monitor the levels of these sub-stances. These special sensors (chemoreceptors) are located near the aorta, carotid artery (peripheralchemoreceptors), and the medulla near the respira-tory center (central chemoreceptors).

The chemoreceptors near the large blood vessels are known as aortic bodies and carotid bodies. The chemoreceptors are small structures, about 2 mg (0.03 g) in weight and a few millimeters wide, located near the arch of the aorta and the bifurcation of the carotid arteries, respectively. The cells of these bodies are surrounded by large, fenestrated (with many gaps) capillaries. The blood flow through these bod-ies is considered the highest at 2,000 mL per 100 g of tissue compared with that of the brain at 54 mL per 100 g and that of the kidney with 420 mL per 100 g . The cells are closely associated with sensory nerve fibers that travel from the bodies to the brain via the glossopharyngeal and vagus nerves.

The cells in the bodies are sensitive to the levels of dissolved oxygen in the plasma, increasing levels of carbon dioxide, and increase in hydrogen ions. When oxygen levels drop or carbon dioxide and hydrogen ion levels increase, the receptors are stimulated and take impulses to the respiratory center, which re-sponds by increasing the rate and depth of respiration.

In addition to these bodies, there are special cells located close to the respiratory center, in the medulla, which are stimulated by higher carbon dioxide and hydrogen ion levels and lowered oxygen levels in the cerebrospinal fluid.

OTHER MECHANISMS THAT CONTROL RESPIRATION

Other than chemoreceptors, respiration is affected by stimulation of receptors in the airways and lungs. Im-pulses generated by these receptors are carried by the vagus nerve to the respiratory centers. These recep-tors respond to stretch and, when the lungs are over inflated, inhibit inspiration. This is considered a pro-tective reflex that prevents overinflation of the lungs and is referred to as the inflation reflex (Hering-Breuer reflex).

Nerves from the hypothalamus and limbic system communicate with the respiratory centers, altering breathing when in pain or when emotional. For ex-ample, sudden severe pain can cause respiration to temporarily cease. Prolonged somatic pain can bring about an increase in respiratory rate.

Research shows that even active and passive movements of joints stimulate respiration. Proprioceptors that monitor movement of joints and muscle stimu-late the respiratory center even before changes in pH and oxygen and carbon dioxide levels are produced. Changes in blood pressure and state of the heart can affect respiration as well. A sudden rise in blood pres-sure decreases the rate of respiration through the in-fluence of baroreceptors on the respiratory center. Receptors from the mouth and pharynx also have an effect and are responsible for alterations when vom-iting, gagging, and swallowing .

During sleep, the control of respiration is less rigorous and sensitivity to changing levels of carbon dioxide is reduced; hence, brief periods of apnea may be observed.

In summary, the regulation of respiration is a complex process in which the activity of respiratory cen-ters that generate rhythmic impulses to the respira- tory muscles is altered by many stimuli—some stim-ulatory and some inhibitory—arising from other parts of the brain and outside the nervous system.