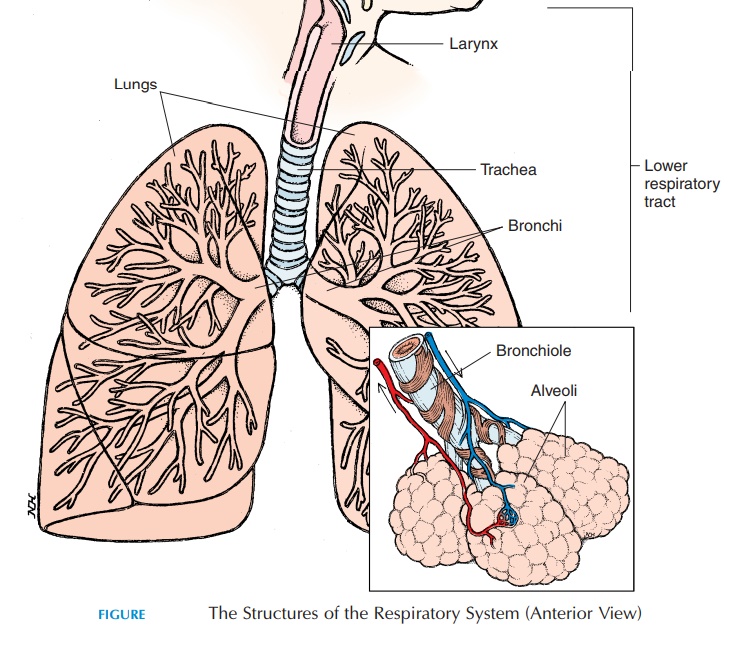 The larynx, or voice box (see Figure 10.6), is the re-gion that connects the pharynx to the trachea (wind-pipe).

The larynx, or voice box (see Figure 10.6), is the re-gion that connects the pharynx to the trachea (wind-pipe). It can be felt just below the jaw in the upper, anterior part of the neck. The larynx is largely carti- lage, with ligaments and muscles attached. The epiglottis, thyroid cartilage, and cricoid cartilage are the larger cartilages. The epiglottis, located inter-nally close to the base of the tongue, is shaped like a shoehorn. With each swallow, it moves posteriorly to close the narrow opening of the larynx (the glottis) to prevent entry of food into the larynx. Other smaller cartilages—arytenoids, cuneiform, and corniculate—elastic ligaments, and tiny muscles are located in the larynx. Two elastic ligaments, known as the true vocal cords, extend between the thyroid cartilage and arytenoid cartilage and go across the glottis. These ligaments are stretched and relaxed by laryngeal muscles that move the cartilage. The air that passes through the opening vibrates the vocal cords and produces sound. The size of the glottis and the length and tension of the vocal cords determine the pitch of the sound produced.

In males at puberty, the larynx enlarges in size and the vocal cords thicken and lengthen, making the voice deeper and lower pitched. Just superior to the true vocal codes are folds of mucosa known as the false vocalcords, or ventricular folds. The mucosa inferior tothe vocal cords is lined with pseudostratified ciliated columnar epithelium.

The sound production in the larynx is known as phonation. However, for words to be formed, thissound must be modified by articulation. Articulation requires voluntary muscle movement of the lips, cheeks, and tongue, etc. The pharynx, mouth, nasal cavity, and sinus act as resonating chambers.

The larynx contains sensitive nerves that trigger the cough reflex if food particles inadvertently enter this region. The cough reflex results in deep inspiration, followed by contraction of the expiratory muscles, with the glottis closed and the vocal cords tightened. This results in increased lung pressure. Suddenly, the glottis is opened, allowing a forceful blast of air to come through, dislodging the irritant from the laryn-geal region into the pharynx and beyond.

The trachea (Figures 10.1 and 10.7) is a tube about 11 cm (4.3 in) long and 2.5 cm (1 in) wide. It extends from the cricoid cartilage to the T5 vertebra, where it branches in two—the right and left primarybronchi. It is kept patent by 16–20 C-shaped carti-lage (the opening of the C faces posteriorly), attached to each other by ligaments. The posterior part of the trachea is closed off by a smooth muscle, the tra-chealis muscle. The cartilage prevents the tracheafrom collapsing every time there is a pressure change produced between the inside of the trachea and the atmosphere (in the neck region) as one breathes. The softer, posterior aspect of the trachea allows for ex-pansion of the esophagus as food passes. The Bronchi and Bronchioles

The trachea branches into the right and left primarybronchi at the level of the second costal cartilage atthe sternal angle (superior border of the fifth thoracic vertebra) in the mediastinum. Both bronchus have cartilage similar to the trachea, with the right bronchus wider and more in line with the trachea. Therefore, foreign particles that enter the trachea (a rare occurrence) tend to lodge in this bronchus. The bronchi enter the lungs at the hilus, the medial re-gion of the lung, through which blood vessels, nerves, lymphatics, and bronchi enter.

The primary bronchi divide repeatedly to form smaller bronchi and bronchioles. The bronchi located outside the lungs are known as extrapulmonarybronchi and the remainder, intrapulmonary bronchi.

The primary bronchi divide into three on the right and two on the left known as lobar, or secondary bronchi.

Each bronchus moves air in and out of the respective lobes of the lungs (see below). The lobar bronchi be-come smaller and branch again to form the tertiary, orsegmental bronchi. The tertiary bronchi branch fur-ther to form tiny, terminal bronchioles, which are about 0.3–0.5 mm (0.01–0.02 in) wide. The terminal bronchioles are continuous with the The lung tissue supplied by each tertiary bronchi is called a bronchopulmonary segment. There are ten bronchopulmonary segments in each lung, each made of many lobules. Each lobule (see Figure 10.8) is wrapped in elastic connective tissue and has an ar-teriole, venule, lymphatic vessel, and a branch from the terminal bronchiole. If there are tumors or ab-scesses in any bronchopulmonary segment, the seg-ment can be surgically removed without affecting the surrounding lung tissue. Knowledge of the direction of bronchi supplying the segments helps therapists facilitate drainage of secretions from specific seg-ments by changing the posture of the patient.

All structures from the nasal cavity to the terminal bronchiole serve only as conducting passages for the air that enters. Exchange of gases between the air and the blood only takes place in the region of the respiratory bronchioles and beyond.

Bronchial Smooth Muscle and Its Control

Bronchi walls lose cartilage as they branch and be-come smaller. Instead, the walls have more smooth muscle. Contraction and relaxation of these smooth muscles alter the caliber of the bronchi and bronchi-oles regulating the volume of air entering different re-gions of the lungs. The smooth muscles of the bronchi and bronchioles are innervated by the autonomic sys-tem. The sympathetic nerves relax the smooth mus-cles and increase the caliber of the passages, making it easier for air to enter the lungs; the parasympa-thetic nerves have the opposite action. In addition to nerves, chemicals such as leukotrienes and substance P, secreted locally by white blood cells and other cells, have an effect on bronchial smooth muscles. This is why asthma tends to worsen during, or soon after, res-piratory infections in which white blood cell activity is increased. Also, allergen exposure and resultant in-flammation can trigger an asthmatic attack.

The respiratory bronchioles are connected to larger spaces, called alveolar ducts, into which open smaller chambers known as the alveoli (Figure 10.8). The alveoli (singular, alveolus) are lined by a single layer of squamous cells. The alveoli walls contain elastic fibers that help reduce the volume of the alveoli when air is breathed out. The alveoli give the lungs a spongy ap-pearance. The alveoli increase the surface area for ex-change of gases; each lung contains about 150 million alveoli. The total surface area made available for gas exchange by the alveoli is approximately 150 m2 (179 yd2). The alveoli are surrounded by an extensive net-work of capillaries. Thus, the air that enters the alveoli is separated from the blood by only the thin, single layer of endothelium of the capillaries, a basement membrane, and the thin wall of the alveoli—a distance of about 0.1µm. These layers that separate air from blood are known as the respiratory membrane.

Many macrophages patrol the alveoli and eliminate pathogens that have escaped other defense mecha-nisms of the respiratory system.

The thin, moist lining of the spherical alveoli tends to collapse and stick together because of surface ten-sion. (Surface tension is the force produced by the at-traction of water molecules to each other. When wa-ter surrounds gas, the attraction between the water molecules rather than between air and water, pro-duces a force that is directed inward. It is surface ten-sion that causes a drop of water to attain a spherical shape.) Specialized cells, known as type II cells, sep-tal cells, or surfactant cells, produce an oily secre-tion (surfactant), which lubricates and reduces the surface tension of the liquid coating the alveoli. Sur-factant is a detergentlike mixture of phospholipids and lipoprotein. If not present in sufficient amounts, it will be difficult for air to enter the alveoli, similar to the difficulty faced when two, wet, glass surfaces, placed one over the other, are pried apart. In the ab-sence of surfactant, the alveoli tend to collapse dur-ing expiration.