A unitary system of government, or unitary state, is a sovereign state governed as a single entity. 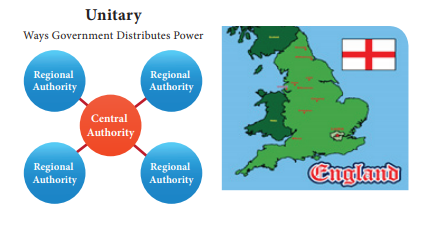 A.V.DICEY: “Habitual exercise of supreme legislative authority is by one central power”

GARNER: “Where the whole power of government is conferred by the constitution upon a single central organ”

ii.          The absence of the subsidiary sovereign bodies.

K.C.Wheare : A constitution, Unitary and highly centralised on paper , may be almost federal in practice;

Merits Of Unitary Form Of Government

a.   Suitable for small countries.

b.  There is no conflict of authority and responsibility.

e.   Amendments to the constitution are easy.

f.    There is unity, uniformity of law, policy and administration.

a.   It is not suitable for big countries.

b.  The central government will have to tackle so many complex problems that lead to administrative delay.

c.   The central government will not concentrate on local problems, local interest and initiative.

The concentration of powers may pave way for the despotism of the central government.

The division of powers is in favour of the Centre and highly inequitable from the federal angle. Firstly, the Union List contains more subjects than the State List. Secondly, the more important subjects have been included in the Union List. Thirdly, the Centre has overriding authority over the Concurrent List. Finally, the residuary powers have also been left with the Centre, while in the US, they are vested in the states. Thus, the Constitution has made the Centre very strong.

Unlike in other federations, the states in India have no right to territorial integrity. The Parliament can by unilateral action change the area, boundaries or name of any state.

iv. Flexibility of the Constitution

The bulk of the Constitution can be amended by the unilateral action of the Parliament, either by simple majority or by special majority. Further, the power to initiate an amendment to the Constitution lies only with the Centre. In India states don’t have the right to propose amendment unlike in U.S.A

During an emergency, the Central government becomes all powerful and the states go into the total control of the Centre. It converts the federal structure into a unitary one without a formal amendment of the Constitution. This kind of transformation is not found in any other federation.

It means that all the courts of India are in a hierarchical order from the lower courts to the Supreme Court of India. Courts in India have Original and Appellate Jurisdiction.

It has the features of All India Services or Central Services, and the State Civil Services. The Central and All India services promotes uniform administrative system and process throughout India.

The governor of a state is not elected but appointed by the president and holds office at the pleasure of the president. He is the head of the executive in the state. He has powers like Legislature, Executive Judicial and emergency powers.