The Indian Constitution establishes a dual polity consisting the Union at the Centre and the states at the periphery. Each is endowed with sovereign powers to be exercised in the field assigned to them respectively by the Constitution.

The articles of the Constitution are written and cannot be easily changed without due parliamentary approval.

d. Supremacy of the Constitution

The Constitution is the supreme law of the land. The laws are enacted by the Centre and the states must confirm to its provisions.

Amendment of the Constitution is by a procedure of 2/3rd majority in each of the house and laws cannot be easily changed by any ruling party.

It provides for a two-house legislature that has an Upper chamber and Lower chamber. With the Lower house having powers of enacting financial legislation.

a. Reconciliation of local autonomy with national unity.

b. Division power between centre and states leads to administrative efficiency.

f. It is good for economic and cultural progress.

h.Federal government is weaker when compared to the unitary government.

i. Federal government is more expensive.

k. lack of uniformity in Administration.

m. Distribution powers between centre and states lead to conflict. 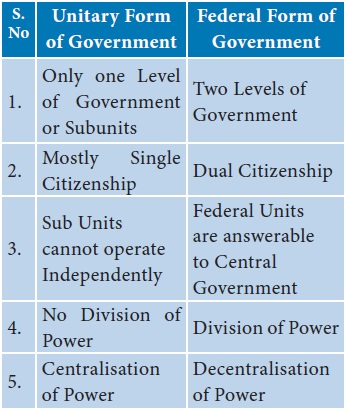 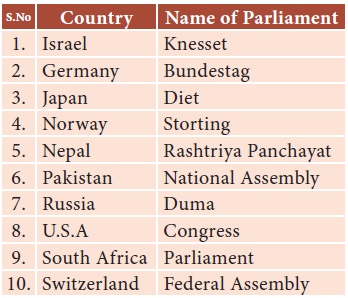 Based on the photo discuss the following questions in the class:

b.           Why are institutions essential in democratic governments?

c.            What is the significance of the Parliament in a democratic country?

e.  What ‘values’ are associated with Parliament in a democratic country?