Ultrasonic Scanning Methods A, B and C Scan Displays

In the Ultrasonic scanning methods, the principle, construction and working is the same as that of the Ultrasonic law detector. Here, it is based on the position o the transducer and the output displayed in the CRO screen, we can classiy the scanning methods into three types a. A-scan b. B-scan c. T-M scan or C-scan

All these three modes of scanning are obtained with respect to the pulses of Ultrasound transmitted into and received from the specimen. The three modes are explained below.

a A-Scan or Amplitude mode display

Amplitude mode display gives only one-dimensional information about the given specimen. In this, a single transducer is used to transmit and receive the pulses from the specimen.

The received or the reflected echo signals from the specimen is given to the Y-Plate and time base is connected to the X-Plate of the CRO, so that they are displayed as vertical spikes along horizontal base line as shown in the figure 1.10.1. 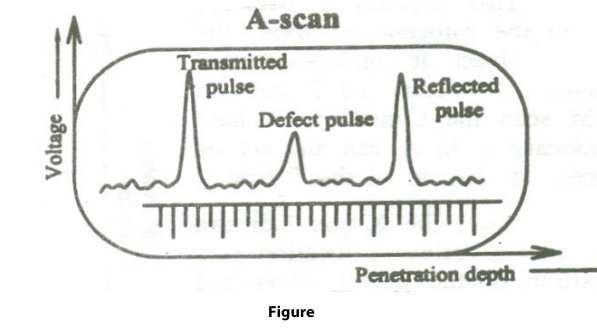 Thus by passing Ultrasonic waves o known velocity and by noting the time delay, we can find the distance at which the detect or flaws are present, by using the formula.

In ultrasonic flaw detector, A-scan method is used to detect the position and size of the flaws.

b. B-Scan or Brightness Mode Scan

B-scan or Brightness mode display gives a two dimensional image. The principle of the B-Scan is same as that of A-Scan except with a small difference. Here in the B-Scan the transducer can be moved rather than keeping in a fixed position. As a result each echo’s are displayed as dots on the screen as shown in the figure 1.10.2.

This method is used to obtain the information about the moving object.

This combines the features of both A-Scan as well as B-Scan. In this the transducer is held stationary as in A-scan and echoes appear as dots in the B-scan.