Definition: The absorption coefficient of a surface is defined as the reciprocal of its area which absorbs the same amount of sound energy as absorbed by a unit o an open window.

We know that all the sound waves when pass through as open window passes through it. Thus, we can say that the open window behaves as a perfect absorber of sound and hence the absorption coefficient can be defined as the rate of sound energy absorbed by a certain area of the surface to that o an open window of same area.

Definition: The absorption coefficient of a surface is defined as the reciprocal of its area which absorbs the same amount of sound energy as absorbed by a unit o an open window.

The average absorption coefficient is defined as the ratio between the total absorption in the hall to the total surface area of the hall. 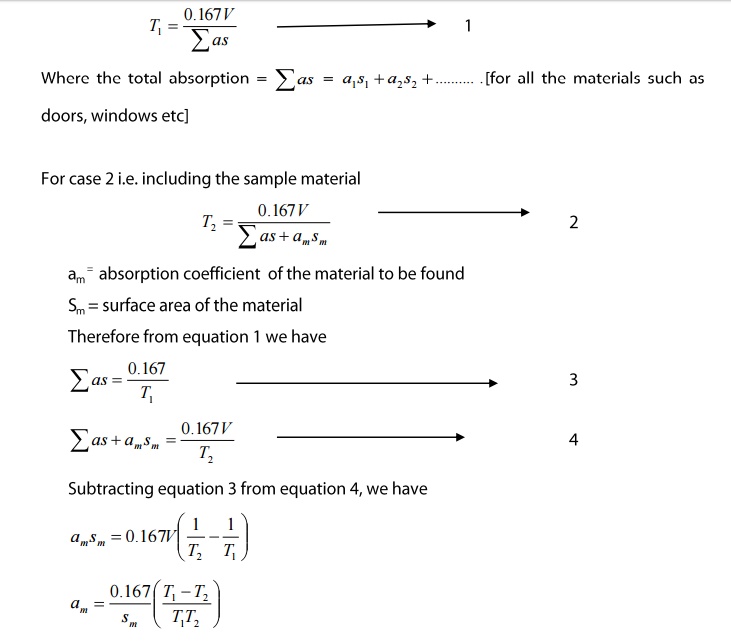 Here, by knowing the terms on the right hand side the absorption coefficient of the given sample can be determined.

3 ACTORS AFFECTING THE ACOUSTICS OF BUILDING

We know, when sound waves are produced in a hall, it reaches the observer directly as well as after reflections from walls, floors, ceilings, etc. Thus there is a possibility for causing interference between these waves, which in turn affects the originality of the sound produced.

The actors affecting the acoustics (sound) of building are as follows.

iii.              Improper focusing of sound to a particular area, which may cause interference

vi.              Unwanted sound rom outside or inside the building, so called noise may also affect the acoustics o buildings.

3.1 OPTIMUM REVERBERATION TIME AND ITS REMEDY

We know Reverberation time is the taken for the sound to fall to one millionth o its original sound intensity, when the source of sound is switched off.

The optimum reverberation time can be achieved by the following steps

1.     By having the full capacity o audience in the auditorium.

2.     By choosing absorbents like felt, fiber, board, glass etc inside the auditorium and even at the back of chairs.

3.     Reverberation time can be optimized by providing windows and ventilators at the places wherever necessary and using curtains with folds or the windows.

4.     The reverberation time can also be optimized by decorating the walls with beautiful pictures.

The optimum reverberation time will not be constant for all types of building; it varies from one building to another as follows.

3.2 Loudness and its remedy:

We know loudness is the degree of sensation produced on the ear; it varies from observer to observer. But, it is found that for a single observer the loudness varies from one place to another in the same auditorium. This defect is caused due to the bad acoustical construction of buildings.

ii.                 The loudness can also be increased by making reflecting surfaces, wherever necessary

Thus, the loudness should be made even, all over the auditorium, so that the observer can hear the sound at a constant loudness at all the places.

ii.                 By evenly polishing and decorating with absorbents the interference effects can be avoided.

If there is a greater repetition of echoes of the original sound to the observer then the effect is called as Echelon effect.

The echo can be avoided by lining the surfaces with suitable sound absorbing materials and by providing enough number of doors and windows.

Resonance occurs when a new sound note of frequency matches with standard audio frequency. Sometimes, the window panel, sections of the wooden portion is thrown into vibrations to produce new sounds, which results in interference between original sound and created sound. This will create disturbance to the audience.

i.                   The resonance effect can be avoided by providing proper ventilation and by adjusting the reverberation time to the optimum level.

ii.                 Nowadays the resonance is completely eliminated by air conditioning the halls.

Noise is an unwanted sound produced due to heavy traffic outside the hall which leads to displeasing effect on the ear. There are three types of noises.

All these three noises pollute the area at which it has been produced and create harmful effects to the human beings. Fortunately human beings have the capability to reject the sound within certain limits with conscious efforts and to carry on his normal work. But sometimes the noises are strong which results in the following effects.

3.7 EFFECTS PRODUCED DUE TO NOISE POLLUTION

·        It produces mental fatigue and irritation.

·        It diverts the concentration on work and hence reduces the efficiency of the work.

·        It sometimes affects the nervous system and lowers the restorative quality of sleep.

·        Some strong noises leads to damage the eardrum and make the worker hearing impaired.

·        The noises which are produced regularly will even retard the normal growth of infants and young children.

The noise which reaches the hall through open windows, doors, and ventilations are called as air borne noise. This type of noise is produced both in rural areas [natural sound of wind and animals] and in urban areas] noise that arises from factories, aircrafts, automobile, trains, Flights etc.

iii.              It can be further by using double doors and windows with separate rames and by pacing the absorbents in-between them

The noise that reaches the hall through the structure of the building is termed as Structure Borne noise. Those types of noise produced inside the building, which may be due to the machinery operation, movement of furniture’s footsteps etc and these sounds will produce structural vibration giving rise to the Structure Borne Noise.

i.                   By properly breaking the continuity of the interposing layers by some acoustical insulators this type of noise can be avoided.

The noises that are produced inside the halls is known as inside noise. Or example in some offices the sound produced by machinery, type writers ect produces this type of noise.

i.                   By placing the machineries and type writers over the absorbing materials or pads this type of noise can be reduced.

iii.              By fitting the engine on the floor with a layer of wood or elt between them this type of noise can be avoided.

4 FACTORS TO BE FOLLOWED FOR GOOD ACOUSTICS OF BUILDING

To have a clear audibility of sound have an optimum level

iv.              Each and every syllable of sound must be herd clearly and distinctly, without any interference.

vi.              The building should be made as sound proof building, so that external noises may be avoided.

vii.            Generally to say the total quality o sound should be maintained all over the building to all the audience.