Properties and Production of Ultrasonic waves

The human ear is sensitive to sound waves in the frequency range from 20-20, 000 Hz. This range is called Auduble range. Sound waves of frequency more than 20,000Hz are called Ultrasonics. These frequencies are beyond the audible limit.

The human ear is sensitive to sound waves in the frequency range from 20-20, 000 Hz. This range is called Auduble range. Sound waves of frequency more than 20,000Hz are called Ultrasonics. These frequencies are beyond the audible limit.

These waves also travel with the speed of sound(330m/s)

Their wavelength are small.

Principle: When a rod of ferromagnetic material like nickel is magnetized. Longitudinally, it undergoes a very small change in length. This is called Magnetostriction effect.

The circuit diagram of magnetostriction ultrasonic generator is as shown in the figure1.3.2. A short permanently magnetized nickel rod is clamped in the middle between two knife edges. A coil L1 is wound on the right hand portion of the rod. C is a variable capacitor. L1 and C1 form the resonant circuit of the collector-tuned oscillator. Coil L2 wound on the LHS of the rod is connected in the base circuit. The coil L2 is used as a feed back loop. 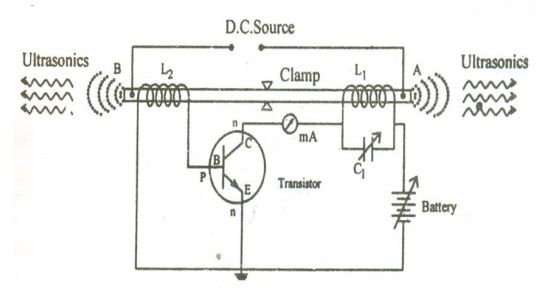 When the battery is switched on, the resonant circuit L1C1 sets up an alternating current o frequency.

This current lowing round the coil L1 produces an alternating magnetic iels of frequency f along the length of the nickel rod. The rod starts vibrating due to magnetostrictive effect. The vibrations of the rod create ultrasonic waves.

The longitudinal expansion and contraction of the rod produces an E.M. in the coil L2. This e.m.f is applied to the base of the transistor. Hence the amplitude of high frequency of high oscillations in coil L1 is increased due to positive feedback.

The developed alternating current frequency can be turned with the natural frequency of the rod by adjusting the capacitor.

The resonance condition is indicated by the rise in the collector current shown in the milliammeter.

The construction cost is low.

They are capable of producing large acoustical power with fairly good efficiency.

It can produce frequencies up to 3MHz only.

They frequency o oscillation depends upon the temperature.

Breadth o the resonance curve is large. It is due to vibrations of elastic constants of ferromagnetic material with the degree of magnetization. So we cannot get a constant single frequency.