Characteristics and Classification of Sound

Sound is a form of energy. Sound is produced by the vibration of the body. Sound requires a material medium for its propagation and can be transmitted through solids, liquids and gases.

Sound is a form of energy.

Sound is produced by the vibration of the body.

Sound requires a material medium for its propagation and can be transmitted through solids, liquids and gases.

When sound is conveyed from one medium to another medium there is no bodily motion of the medium.

Sound requires a definite interval of time to travel from one point to another point in a medium and its velocity is smaller than the velocity of the light.

Velocity of sound is maximum is solids, which have higher bulk modules and least in gases.

Sound may be reflected, refracted, or scattered. It exhibits diffraction and interference.In transverse mode it exhibits polarization also.

Further the audible sound is classified as Musical Sounds and Noise. the sounds

which products effect on the ear are called musical sound and that which produces jarring and unpleasing effect are called noises.

There are three characteristics of Musical Sound

a. Pitch or frequency:

Example: sound of mosquito produces high pitch than the sound of lion which is a lowpitch.

b. Quality or Timbre

notes emitted by the different instruments or voices, even though they have the same

The intensity depends upon the following factors

Where n=Frequency of the sound wave

v=velocity of sound in that medium

x=distance from the source of sound to the receiving end

or Intensity per unit area per unit time

Loudness of the sound is defined as the degree of sensation produced on the ear. The

loudness varies from one observer to another. It is a physiological quantity and therefore itis difficult to measure loudness. But, it can be measured a logarithmic value of intensity

Differentiating equation 1, we have

increase in Intensity. For example more sound in an auditorium will not be hard properly.

1     It refers to the external measurement

1) It is just a sensation produced on the ear.

2) It depends upon individual listener

3) It is measured only with respect to intensity.

If L, is the Loudness of sound of intensity I and L is the loudness corresponding to thestandard reference intensity 1 = 10 watts/m, then according to Weber-Fechner law,

Now, the intensity level (I) which is equal to the difference in Loudness,

If k is taken as 1, the intensity level or difference in loudness is expressed in bels, a

unit named after Alexander Graham Bell, the inventor of Telephone

The unit of Bel is however quite large and hence I is expressed by another standard unitcalled decibel 1 bel = 10 decibels.

If I=0dB, then equation 1 becomes

Subtracting equation 2 from 3, we get

For a change in intensity level of 1 dB, the intensity changes to about 26%.

To build up a scale of business, zero on the scale is taken as the threshold of

hearing, which corresponds to Io = 1012 W/m2. The maximum intensity with which an earcan tolerate is I = 1W/m2

The maximum intensity level an ear can hear is 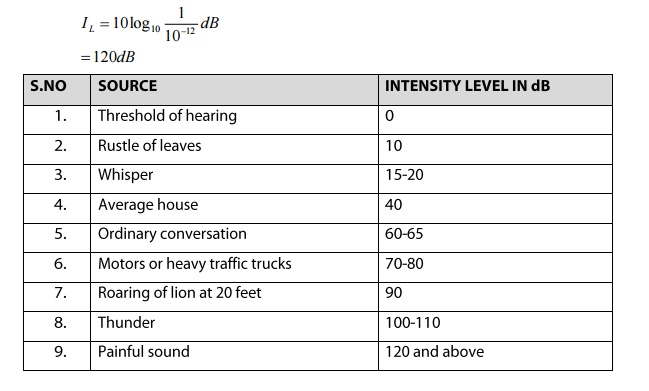 we have expressed the loudness in dB, on the assumption that the threshold of audibilityis constant for all frequencies. But it is found that threshold of audibility varies withfrequency. Sounds of same intensity but of different frequency differ in loudness. Hence adifferent unit called PHON is used to measure loudness level or equivalent loudness.

Definition: The meausre of loudness in Phons of any sound is equal to loudness in

decibels of an equally loud pure tone of frequency 1000Hz.

Explanation: Let us consider two sources 'S' the standard source and S, the source ofsound for which loudness is to be measured. The two sounds are heard alternatively andthe intensity of S is adjusted to be equal to the loudness of the S as shown in the figure.

Now the intensity level of S is measured, If it say 'n' decibels above the standard intensity,then the equivalent loudness is 'n' Phons

The expression for loudness in Phon (L) is given by

Where I is the intensity of sound in dB

Sone is another unit to measure the loudness in terms of Phon or dB. It is used to measurevery high loudness, especially between the ranges of 40 Phons to 100 Phons.

Definition: The measure of loudness in some of any sound in equal to the loudness

of that particular sound having a loudness level of 40 PHons.

Explanation: Suppose a source of sound is having the loudness or 40 Phons then it

can be assumed to have a loudness of 1 Sone.

Expression for Loudness in Sone is empirically given by

Definition: In terms of decibels the Sone is defined as the loudness of an equally

Explanation: It is similar to that of the measurement of loudness in Phon in terms

of dB, but the increase in intensity level should be 40dB above the standard

intensity, then the equivalent loudness is 1 Sone. 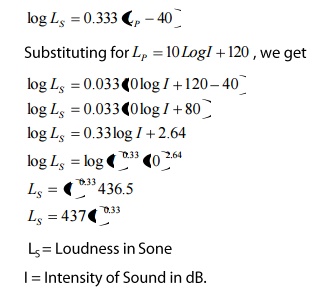