At typical example or a piezo electric crystal (Quartz) is as shown in the igure 1.4.1. It has an hexagonal shape with pyramids attached at both ends. It consists of 3 axes. Viz.,

(iii)           Mechanical axis, which joins the center or sides of the hexagon as shown 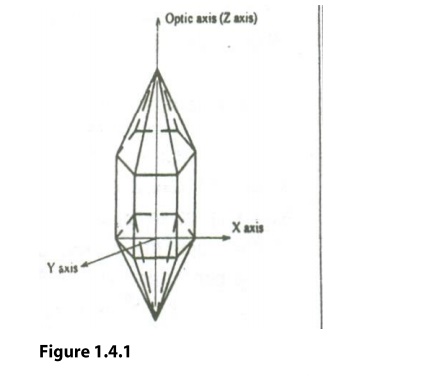 When the crystal is cut perpendicular to the X-axis, as shown in the figure 1.4.2, then it is called X-crystl.

When the crystal is cut perpendicular to the Y-axis, as shown in the figure 1.4.3, then it is called Y-cut crystal.

The circuit diagram is shown in the figure 1.5 It is base turned oscillator circuit. A slice of Quartz crystal is placed between the metal plates A and B so as to form a parallel plate capacitor with the crystal as the dielectric. This is coupled to the electronic oscillator through the primary coil L3 of the transformer.

Coils L2 and L1 of oscillator circuit are taken for the primary of the transformer. The collector coil L2 is inductively coupled to base coil L1. The coil L1 and variable capacitor C form the tank circuit of the oscillator.

When the battery is switched on, the oscillator produces high frequency oscillations. An oscillatory e.m.f is induced in the coil L3 due to transformer action. So the crystal is now under high frequency alternating voltage.

The capacitance of C1 is varied so that the frequency of oscillations produced is in resonance with the natural frequency of the crystal. Now the crystal vibrates with larger amplitude due to resonance. Thus high power ultrasonic waves are produced.

1.     Ultrasonic frequencies as high as 500MHz can be generated.

2.     The output power is very high. It is not affected by temperature humidity.

3.     It is more efficient than the Magnetostriction oscillator.

4.     The breadth of the resonance curve is very small. So we can get a stable and constant frequency of ultrasonic waves.

2.     Cutting and shaping the crystal is quite