Types of chennel of distribution

Types of chennel of distribution

The types of chennel of distribution are as follows;

I. Channels based on the middlemen.

II. Channels based on the type of goods and services

III. Channels based on national and international markets

I. Channels based on the middlemen.

The producer takes upthetask of distributing the goods either through his own company showrooms or branches or through his  sales team. Producer himself exercises direct control over thr distribution.Some producers sell goods right from the doors of their factory directly to the consumers. 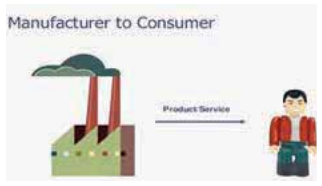 The manufacturer collects orders from the consumers through post or mail or phone and delivers the products themselves. Some producers send the catalog of their products directly to the consumers and receive orders over post or phone. Then they distribute goods to the demanding consumers.

This is also a direct channel where there is no middleman. A website is created by the producer and through internet the product order is received and  delivery  of  goods  is made from the nearest godown of the producer.

The manufacturer establishes branches all over the country or in other countries also. The producer first enrolls few consumers. These consumers are asked to bring in more consumers. Various commissions are paid to the senior and junior consumers according to their turnover. All consumers directly purchase from the producer’s branches.

B. Indirect Channel or Distribution Through Middleman

i. Contract Distributors or Contract Logistics

The large scale producer outsources the warehousing, transporting and distribution functions to a third party on contract. The contractor may process orders, collect payments and carry out customer service also. He  is paid commission on the basis  of turnover. Multi-National Companies outsource distribution function and concentrate on their core production function.

The VARs receive the products from the manufacturers, incorporate them as if their own products by adding value enhanced service and sell them to customers. VARs provide highly skilled technical  support  so that the customer can have world class satisfaction. Microsoft India has appointed Avnet and Redington as VARs in India. A solar panel producer may have builders as VARs and the builders offer solar panel as additional facility to the buyers of flats, etc.

Producers adopt this channel to distribute goods or services in the home country and foreign countries. (Read separate chapter on Franchising in another lesson)

The producer appoints a network of retailers. The storage, warehousing, transport and distribution functions are undertaken  by the producer himself. Branded and well established products can be routed through this channel. 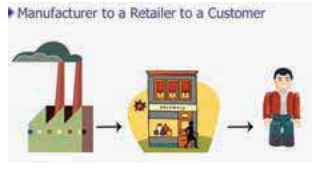 The  manufacturer  engages  wholesalers  to purchase products from them  as  soon as the production is over. The storage, warehousing, transport and distribution functions are carried out by the wholesalers. These wholesalers contact retailers  and  sell goods in small quantities to them. Wholesalers may deal ina variety of products from different producers. Finally retailers sell goods to individual end consumers.

In addition to the above channels of distribution, the middlemen, agents play the role of producers and wholesalers. They gather the agricultural produces or fishes from boats operators. They collect orders from the wholesalers and bring the goods to the place of wholesaler. Agents perform their functions for a commission based on their turnover.

II. Channels Based on the Type of Goods and Services

Fast moving consumer goods (FMCG) like provision items, clothes, etc. every customer buys to utilise and exhaust them. Next day or week or month fresh purchases need to be made. There are durable goods used by consumers like refrigerator, television, LED bulbs, fan, laptop etc.

They are used continuously for years together. Next purchase is made after some years. Further they need to be installed, serviced and spare parts for replacement. The retail  stores for  FMCG  goods  are  far more in number than durable goods retailers. But the distribution channels are the same for both of them.

Industrial machinery and  equipment need  shorter  channel of  distribution. The industries  that  use  the   products are less in number. Technical  support from producer or dealer is required for installation, operation and  maintenance  of the machinery.  The  producer  sells  the machinery  through his   salesmen  or authorized dealers. MRI - Magnetic Resonance Imaging Scanner used in hospitals to produce images of body structures are sold through authorized dealers or wholesalers to customers.

Services can never be stored. A banking transaction or a mobile connectivity is created for the particular customer at the specific

time. Mostly direct channel is operated by all producers through branches. Even in Information Technology  (IT)  companies, a software is created and modified to suit the customer’s needs. Insurance companies have branches and employ agents to connect with  policyholders.  Producer’s  website  is of greater use in connecting with the consumers in services marketing.

IV. Channel Based on National and International Markets

The national or country level middlemen are already dealt with in detail in the previous paragraphs. The international distribution of goods and services consists of two sub systems. They are domestic distribution system and foreign distribution system. There are export merchants, export trading houses, export agents, state trading organisations, joint ventures, licensees, franchisees etc. performing the functions of middlemen.