1. Classification based on the nature of rearrangements of atoms

Depending on the chemical nature of the reactants, there are three classes of combination reactions:

In this type of combination reaction, two elements react with one other to form a compound. The reaction may take place between a metal and a non-metal or two non-metals.

Example 1: When solid sulphur reacts with oxygen, it produces sulphur dioxide. Here both the reactants are non-metals.

Example 2: Sodium, a silvery-white metal, combines with chlorine, a pale yellow green gas, to form sodium chloride, an edible compound. Here one of the reactants is a metal (sodium) and the other (chlorine) is a non-metal.

Identify the possible combination reactions between the metals and non-metals given in the following table and write their balanced chemical equations:

In this case, a compound reacts with an element to form a new compound. For instance, phosphorous trichloride reacts with chlorine gas and forms phosphorous pentachloride.

It is a reaction between two compounds to form a new compound. In the following reaction, silicon dioxide reacts with calcium oxide to form calcium silicate.

Most of the combination reactions are exothermic in nature. Because, they involve the formation of new bonds, which releases a huge amount of energy in the form of heat.

There are three main classes of decomposition reactions. They are

In this type of reaction, the reactant is decomposed by applying heat. For example, on heating mercury (II) oxide is decomposed into mercury metal and oxygen gas. As the molecule is dissociated by the absorption of heat, it is otherwise called ‘Thermolysis’. It is a class of compound to element/element decomposition. i.e. a compound (HgO) is decomposed into two elements (Hg and Oxygen).

Similarly, when calcium carbonate is heated, it breaks down in to calcium oxide and carbon dioxide. It is a type of compound to compound/compound decomposition.

In thermal decomposition reaction, heat is supplied to break the bonds. Such reactions, in which heat is absorbed, are called ‘Endothermic reactions’.

In some of the decomposition reactions, electrical energy is used to bring about the reaction. For example, decomposition of sodium chloride occurs on passing electric current through its aqueous solution. Sodium chloride decomposes in to metallic sodium and chlorine gas. This process is termed as ‘Electrolysis’.

Here, a compound (NaCl) is converted into elements (Na and chlorine). So it is a type of compound to element/element decomposition.

Light is an another form of energy, which facilitates some of the decomposition reactions. For example, when silver bromide is exposed to light, it breaks down into silver metal and bromine gas. As the decomposition is caused by light, this kind of reaction is also called ‘Photolysis’. 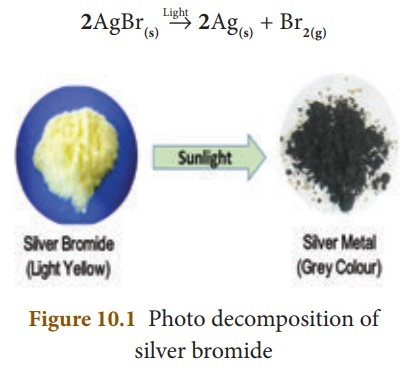 It is a reaction between an element and a compound. When they react, one of the elements of the compound-reactant is replaced by the element-reactant to form a new compound and an element. The general schematic representation of a single displacement reaction is given as:

‘A’ displaces element ‘B’ from the compound ‘BC’ and hence a single displacement reaction occurs. If zinc metal is placed in hydrochloric acid, hydrogen gas is evolved. Here, hydrogen is displaced by zinc metal and zinc chloride is formed. 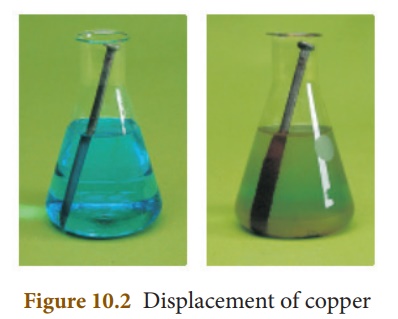 It is easy to propose so many reactions of this kind with different combinations of reactants. Will they all occur in practice? No. This is most easily demonstrated with halogens. Let us consider the following two reactions:

The first reaction involves the displacement of chlorine from NaCl, by fluorine. In the second reaction, chlorine displaces fluorine from NaF. Out of these two, the second reaction will not occur. Because, fluorine is more active than chlorine and occupies the upper position in the periodic table. So, in displacement reactions, the activity of the elements and their relative position in the periodic table are the key factors to determine the feasibility of the reactions. More active elements readily displace less active elements from their aqueous solution.

The activity series of some elements is given below: 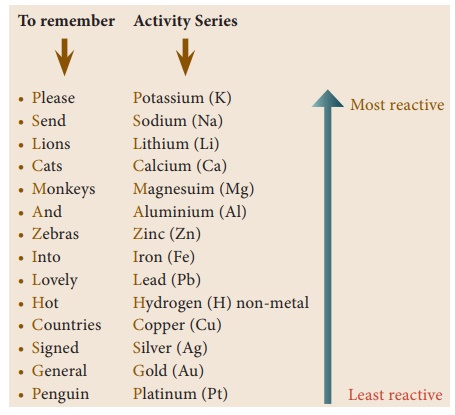 By referring the activity series, try to answer the following questions:

Which of the metals displaces hydrogen gas from hydrochloric acid? Silver or Zinc. Give the chemical equation of the reaction and Justify your answer. 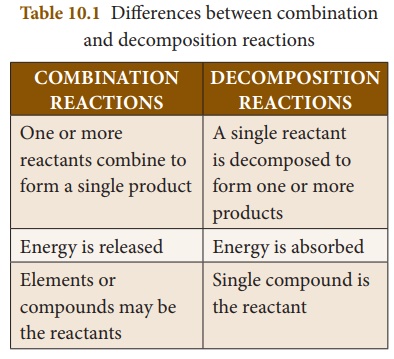 When the clear aqueous solutions of potassium iodide and lead (II) nitrate are mixed, a double displacement reaction takes place between them.

Potassium and lead displace or replace one other and form a yellow precipitate of lead (II) iodide as shown in Fig. 10.3. 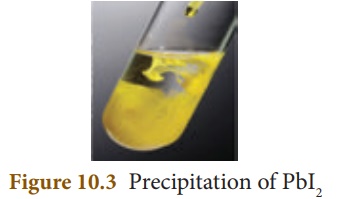 In your lower classes, you have learned the reaction between an acid and a base. It is another type of displacement reaction in which the acid reacts with the base to form a salt and water. It is called 'neutralization reaction' as both acid and base neutralize each other. 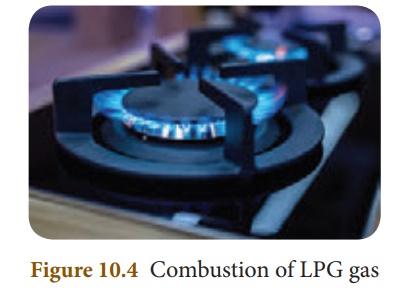 Which of the following is a combustion?

(i) Digestion of Food

Many thousands of reactions fall under these five categories and further you will learn in detail about these reactions in your higher classes.

2. Classification based on the direction of the reaction

You know that innumerable changes occur every day around us. Are all they permanent? For example, liquid water freezes into ice, but then ice melts into liquid water. In other words, freezing is reversed. So, it is not a permanent change. Moreover, it is a physical change. Physical changes can be reversed easily. Can chemical changes be reversed? Can the products be converted into reactants? Let us consider the burning of a wood. The carbon compounds present in the wood are burnt into carbon dioxide gas and water. Can we get back the wood immediately from carbon dioxide and water? We cannot. So, it is a permanent change. In most of the cases, we cannot. But, some chemical reactions can be reversed. Our mobile phone gets energy from its lithium ion battery by chemical reactions. It is called discharging. On recharging the mobile, these chemical reactions are reversed. Thus, chemical reactions may be reversed under suitable conditions. Hence, they are grouped into two categories such as reversible and irreversible reactions. 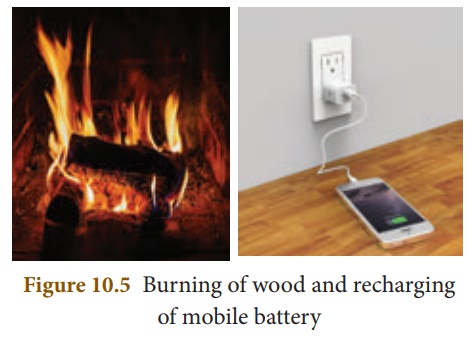 Explanation: Here, the compound ‘AB’ undergoes decomposition to form the products ‘A’ and ‘B’. It is the forward reaction. As soon as the products are formed, they combine together to form ‘AB’. It is the backward reaction. So, the reaction takes place in both the directions. Do you think then that no products are formed in the aforesaid reaction? If you think so, you are wrong. Because, even though the reaction takes place in both the directions, at the initial stage the rates (speed) of these reactions are not equal. Consider the following decomposition reaction of phosphorous pentachloride into phosphorous trichloride and chlorine.

In this reaction, solid coal burns with oxygen and gets converted into carbon dioxide gas and water. As the product is a gas, as soon as it is formed it escapes out of the reaction container. It is extremely hard to decompose a gas into a solid. Thus, the backward reaction is not possible in this case. So, it is an irreversible reaction. Table 10.2 provides the main differences between a reversible and an irreversible reaction: 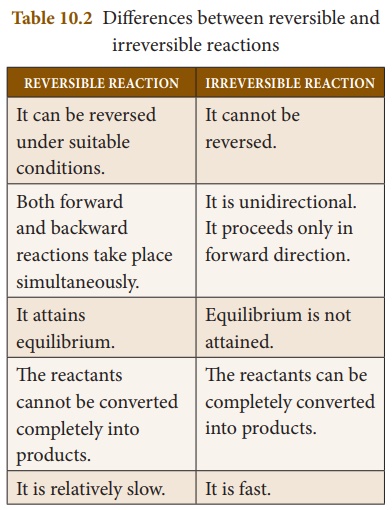 You will learn more about these reactions in your higher classes.