Chemical Equilibrium: It is state of a reversible chemical reaction in which no change in the amount of the reactants and products takes place. At equilibrium, Rate of forward reaction = Rate of backward reaction

In a reversible reaction, both forward and backward reactions take place simultaneously. When the rate of the forward reaction becomes equal to the rate of backward reaction, then no more product is formed. This stage of the reaction is called ‘equilibrium state’ . After this stage, no net change in the reaction can occur and hence in the amount of the reactants and products. Since this equilibrium is attained in a chemical reaction, it is called ‘Chemical Equilibrium’. Chemical Equilibrium: It is state of a reversible chemical reaction in which no change in the amount of the reactants and products takes place. At equilibrium,

At a certain stage, both the rates become equal. From this point onwards, there will be no change in the concentrations of both the reactants and the products with time. This state is called as equilibrium state.

Let us consider the decomposition of calcium carbonate into lime and carbon dioxide. It is a reversible reaction. The speed of each reaction can be determined by how quickly the reactant disappears. If the reaction is carried out in a closed vessel, it reaches a chemical equilibrium. At this stage,

Not only chemical changes, physical changes also may attain equilibrium. When water kept in a closed vessel evaporates, it forms water vapour. No water vapour escapes out of the container as the process takes place in a closed vessel. So, it builds up the vapour pressure in the container. At one time, the water vapour condenses back into liquid water and when the rate of this condensation becomes equal to that of vapourisation, the process attains equilibrium. 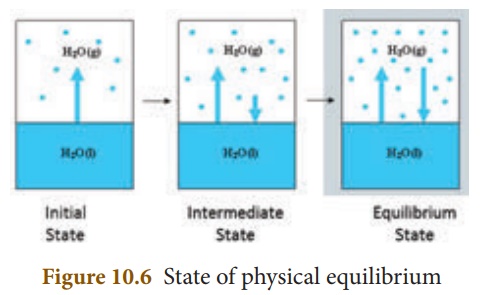 ·                 The observable properties such as pressure, concentration, colour, density, viscosity etc., of the system remain unchanged with time.

·                 The chemical equilibrium is a dynamic equilibrium, because both the forward and backward reactions continue to occur even though it appears static externally.