Two dimensional viewing The viewing pipeline A world coordinate area selected for display is called a window. An area on a display device to which a window is mapped is called a view port.

A viewing transformation using standard rectangles for the window and viewport 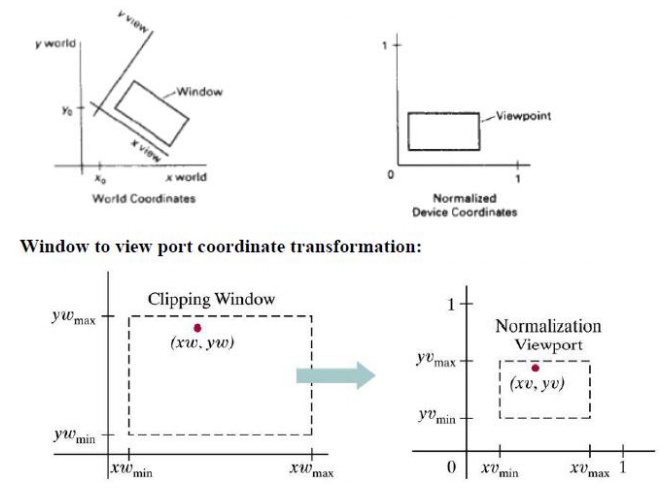 A point at position (xw,yw) in a designated window is mapped to viewport coordinates (xv,yv) so that relative positions in the two areas are the same. The figure illustrates the window to view port mapping. A point at position (xw,yw) in the window is mapped into position (xv,yv) in the associated view port. To maintain the same relative placement in view port as in window The conversion is performed with the following sequence of transformations.

1.  Perform a scaling transformation using point position of (xw min, yw min) that scales the window area to the size of view port.

2. Translate the scaled window area to the position of view port. Relative proportions of objects are maintained if scaling factor are the same(Sx=Sy).

Otherwise world objects will be stretched or contracted in either the x or y direction when displayed on output device. For normalized coordinates, object descriptions are mapped to various display devices. Any number of output devices can be open in particular application and another window view port transformation can be performed for each open output device. This mapping called the work station transformation is accomplished by selecting a window area in normalized apace and a view port are in coordinates of display device. 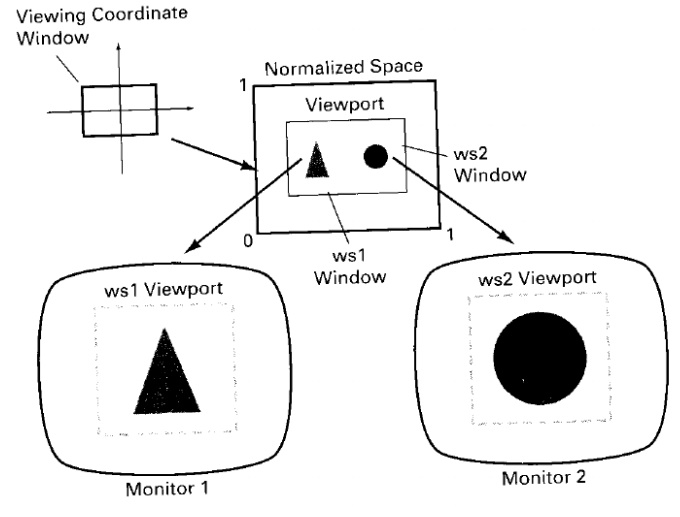 1. The object together with its window is translated until the lower left corner of the window is at the orgin.

2. Object and window are scaled until the window has the dimensions of the viewport

3. Translate the viewport to its correct position on the screen.

The procedure that identifies the portion of a picture that are either inside or outside of a specified regin of space is referred to as clipping. The regin against which an object is to be clipped is called a clip window or clipping window.

The equal sign indicates that points on the window boundary are included within the window.

-   Both end points of the line are exterior to the window, then the line is partially inside and partially outside the window.The lines which across one or more clipping boundaries requires calculation of multiple intersection points to decide the visible portion of them.To minimize the intersection calculation and increase the efficiency of the clipping algorithm, initially completely visible and invisible lines are identified and then intersection points are calculated for remaining lines.

There are many clipping algorithms. They are

It is developed by Dan Cohen and Ivan Sutharland. To speed up the processing this algorithm performs initial tests that reduces the number of intersections that must be calculated.

given a line segment, repeatedly:

1.     check for trival acceptance both

Divide segment in two where one part can be trivially rejected

Clip rectangle extended into a plane divided into 9 regions . Each region is defined by a unique 4-bit string

1. each end point is given the 4-bit code of its region

2. repeat until acceptance or rejection

2. lines that cannot be identified as completely inside or outside are checked for the intersection with two boundaries.

4. forget about the new line segment lying completely outside the clip rectangle

5. draw the line segment which lies within the boundary regin.

If the line partially visible then it is subdivided in two equal parts. The visibility tests are then applied to each half. This subdivision process is repeated until we get completely visible and completely invisible line segments.

4. Check for visibility of line

a. If region codes for both endpoints are zero then the line is completely visible. Hence draw the line and go to step 6.

b. If the region codes for endpoints are not zero and the logical ANDing of them is also nonzero then the line is completely invisible, so reject the line and go to step6

c.  If region codes for two end points do not satisfy the condition in 4a and 4b the line is partially visible.

This algorithm requires repeated subdivision of line segments and hence many times it is slower than using direct calculation of the intersection of the line with the clipping window edge.

The cohen Sutherland clip algorithm requires the large no of intesection calculations.here this is reduced. The update parameter requires only one division and windows intersection lines are computed only once.

The parameter equations are given as

5. If pi=0 then that line is parallel to the ith boundary. if qi<0 then the line is completely outside the boundary. So discard the linesegment and and goto stop.

Check whether the line is horizontal or vertical and check the line endpoint with the corresponding boundaries. If it is within the boundary area then use them to draw a line. Otherwise use boundary coordinate to draw a line. Goto stop.

8. Select values of qi/pi where pi<0 and assign maximum out of them as u1

1.     For the line with two end points p1,p2 determine the positions of a point for 9 regions. Only three regions need to be considered (left,within boundary, left upper corner).

2.  If p1 appears any other regions except this, move that point into this region using some reflection method.

3. Now determine the position of p2 relative to p1. To do this depends on p1 creates some new region.

b. If p1 inside , p2 outside setup 4 regions. Intersection of appropriate boundary is calculated depends on the position of p2.

1. If p2 is in region L, clip the line at the left boundary and save this intersection to p2.

2. If p2 is in region Lt, save the left boundary and save the top boundary.

3. If not any of the 4 regions clip the entire line.

2. else determine a unique clip window edge for the intersection calculation.

Circles and other curved boundaries clipped regions are possible, but less commonly used. Clipping algorithm for those curve are slower.

1. Lines clipped against the bounding rectangle of the curved clipping region. Lines outside the region is completely discarded.

2. End points of the line with circle center distance is calculated . If the squre of the 2 points less than or equal to the radious then save the line else calculate the intersection point of the line.

1. Read the coordinates of all vertices of the polygon.

2. Read the coordinates of the clipping window.

3. Consider the left edge of the window.

4. Compare the vertices of each edge of the polygon, Individually with the clipping plane.

5.  Save the resulting intersections and vertices in the new list of vertices according to four possible relationships between the edge and the clipping boundary discussed earlier.

The following example illustrates a simple case of polygon clipping. 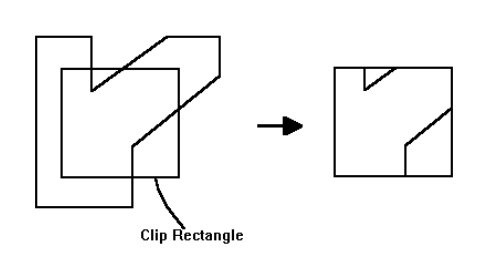 Instead of proceding around the polygon edges as vertices are processed, we sometime wants to follow the window boundaries.For clockwise processing of polygon vertices, we use the following rules.

-  For an outside to inside pair of vertices, follow the polygon boundary.

-  For an inside to outside pair of vertices, follow a window boundary in a clockwise direction.

It involves non linear equations. The boundary rectangle is used to test for overlap with a rectangular clipwindow. If the boundary rectangle for the object is completely inside the window , then save the object (or) discard the object.If it fails we can use the coordinate extends of individual quadrants and then octants for preliminary testing before calculating curve window intersection.

The simplest method for processing character strings relative to a window boundary is to use the all or none string clipping strategy. If all the string is inside then accept it else omit it.

We discard only those character that are not completely inside the window. Here the boundary limits of individual characters are compared to the window.