Color Model is a method for explaining the properties or behavior of color within some particular context. No single color model can explain all aspects of color, so we make use of different models to help describe the different perceived characteristics of color.

Color Model is a method for explaining the properties or behavior of color within some particular context. No single color model can explain all aspects of color, so we make use of different models to help describe the different perceived characteristics of color.

Light is a narrow frequency band within the electromagnetic system.

Other frequency bands within this spectrum are called radio waves, micro waves, infrared waves and x-rays. The below fig shows the frequency ranges for some of the electromagnetic bands.

Each frequency value within the visible band corresponds to a distinct color.

Spectral colors range from the reds through orange and yellow at the low frequency end to greens, blues and violet at the high end.

Since light is an electro magnetic wave, the various colors are described in terms of either the frequency for the wave length λ of the wave.

The wave length ad frequency of the monochromatic wave are inversely proportional to each other, with the proportionality constants as the speed of light

A light source such as the sun or a light bulb emits all frequencies within the visible range to produce white light. When white light is incident upon an object, some frequencies are reflected and some are absorbed by the object. The combination of frequencies present in the reflected light determines what we perceive as the color of the object.

Brightness is another property, which in the perceived intensity of the light.

Intensity in the radiant energy emitted per limit time, per unit solid angle, and per unit projected area of the source.

Radiant energy is related to the luminance of the source.

The next property in the purity or saturation of the light.

o  Purity describes how washed out or how pure the color of the light appears.

o  Pastels and Pale colors are described as less pure.

The term chromaticity is used to refer collectively to the two properties, purity and dominant frequency.

Two different color light sources with suitably chosen intensities can be used to produce a range of other colors.

If the 2 color sources combine to produce white light, they are called complementary colors. E.g., Red and Cyan, green and magenta, and blue and yellow.

Color models that are used to describe combinations of light in terms of dominant frequency use 3 colors to obtain a wide range of colors, called the color gamut.

The 2 or 3 colors used to produce other colors in a color model are called primary colors.

The set of primaries is generally referred to as the XYZ or (X,Y,Z) color model

where X,Y and Z represent vectors in a 3D, additive color space.

Any color Cλ is expressed as

Where X,Y and Z designates the amounts of the standard primaries needed

It is convenient to normalize the amount in equation (1) against luminance (X+ Y+ Z). Normalized amounts are calculated as,

Any color can be represented with just the x and y amounts. The parameters x and y are called the chromaticity values because they depend only on hue and purity.

If we specify colors only with x and y, we cannot obtain the amounts X, Y and Z. so, a complete description of a color in given with the 3 values x, y and Y.

Color paintings can be created by mixing color pigments with white and black pigments to form the various shades, tints and tones.

Starting with the pigment for a „pure color‟ the color is added to black pigment to produce different shades. The more black pigment produces darker shades.

Different tints of the color are obtained by adding a white pigment to the original color, making it lighter as more white is added.

Tones of the color are produced by adding both black and white pigments.

Based on the tristimulus theory of version, our eyes perceive color through the stimulation of three visual pigments in the cones on the retina.

By comparing intensities in a light source, we perceive the color of the light.

This is the basis for displaying color output on a video monitor using the 3 color primaries, red, green, and blue referred to as the RGB color model. It is represented in the below figure 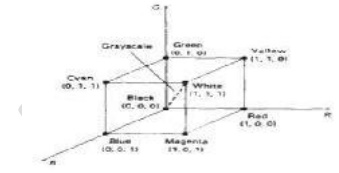 The RGB color scheme is an additive model. (i.e.,) Intensities of the primary colors are added to produce other colors.

Each color point within the bounds of the cube can be represented as the triple (R,G,B) where values for R, G and B are assigned in the range from 0 to1.

The color Cλ is expressed in RGB component as

The magenta vertex is obtained by adding red and blue to produce the triple (1,0,1) and white at (1,1,1) in the sum of the red, green and blue vertices.

Shades of gray are represented along the main diagonal of the cube from the origin (black) to the white vertex.

A combination of red, green and blue intensities are chosen for the Y parameter to yield the standard luminosity curve.

Since Y contains the luminance information, black and white TV monitors use only the Y signal.

Parameter I contain orange-cyan hue information that provides the flash-tone shading and occupies a bandwidth of 1.5 MHz.

Parameter Q carries green-magenta hue information in a bandwidth of about 0.6MHz.

A color model defined with the primary colors cyan, magenta, and yellow (CMY) in useful for describing color output to hard copy devices.

It is a subtractive color model (i.e.,) cyan can be formed by adding green and blue light. When white light is reflected from cyan-colored ink, the reflected light must have no red component. i.e., red light is absorbed or subtracted by the link. 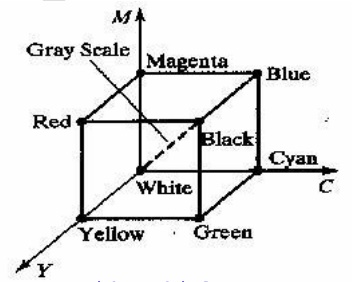 In CMY model, point (1,1,1) represents black because all components of the incident light are subtracted.

Equal amounts of each of the primary colors produce grays along the main diagonal of the cube.

A combination of cyan and magenta ink produces blue light because the red and green components of the incident light are absorbed.

The printing process often used with the CMY model generates a color point with a collection of 4 ink dots; one dot is used for each of the primary colors (cyan, magenta and yellow) and one dot in black.

Where the white is represented in the RGB system as the unit column vector.

Similarly the conversion of CMY to RGB representation is expressed as [ ] [ ] [ ]

Where black is represented in the CMY system as the unit column vector.

The HSV model uses color descriptions that have a more interactive appeal to a user.

Color parameters in this model are hue (H), saturation (S), and value (V). The 3D representation of the HSV model is derived from the RGB cube. The outline of the cube has the hexagon shape.

The boundary of the hexagon represents the various hues, and it is used as the top of the HSV hexcone.

In the hexcone, saturation is measured along a horizontal axis, and value is along a vertical axis through the center of the hexcone.

Value V varies from 0 at the apex to 1 at the top.

At the top of the hexcone, colors have their maximum intensity.

HLS model is based on intuitive color parameters used by Tektronix.

It has the double cone representation shown in the below figure. The 3 parameters in this model are called Hue (H), lightness (L) and saturation (s).

Hue specifies an angle about the vertical axis that locates a chosen hue. 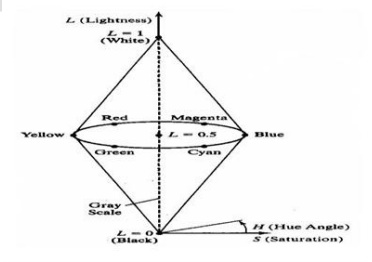 In this model H = θ0 corresponds to Blue.

The remaining colors are specified around the perimeter of the cone in the same order as in the HSV model.

Saturation parameter S specifies relative purity of a color. S varies from 0 to 1 pure hues are those for which S = 1 and L = 0.

As S decreases, the hues are said to be less pure.