It describes a three dimensional object as a set of surfaces that separate the object interior from the environment. Examples are polygon facets and spline patches.

It describes the interior properties, by partitioning the spatial region containing an object into a set of small, nonoverlapping, contiguous solids(usually cubes). Eg: Octree Representation.

Polygon surfaces are boundary representations for a 3D graphics object is a set of polygons that enclose the object interior.

The polygon surface is specified with a set of vertex coordinates and associated attribute parameters.

For each polygon input, the data are placed into tables that are to be used in the subsequent processing.

Geometric Tables Contain vertex coordinates and parameters to identify the spatial orientation of the polygon surfaces.

Attribute tables Contain attribute information for an object such as parameters specifying the degree of transparency of the object and its surface reflectivity and texture characteristics. A convenient organization for storing geometric data is to create three lists:

Coordinate values for each vertex in the object are stored in this table. 2. The Edge Table

It contains pointers back into the vertex table to identify the vertices for each polygon edge. 3. The Polygon Table

It contains pointers back into the edge table to identify the edges for each polygon. This is shown in fig 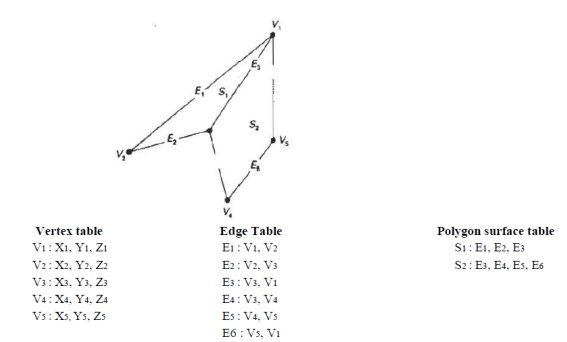 Listing the geometric data in three tables provides a convenient reference to the individual components (vertices, edges and polygons) of each object.

The object can be displayed efficiently by using data from the edge table to draw the component lines.

Extra information can be added to the data tables for faster information extraction. For instance, edge table can be expanded to include forward points into the polygon table so that common edges between polygons can be identified more rapidly.

is useful for the rendering procedure that must vary surface shading smoothly across the edges from one polygon to the next. Similarly, the vertex table can be expanded so that vertices are cross-referenced to corresponding edges.

Additional geometric information that is stored in the data tables includes the slope for each edge and the coordinate extends for each polygon. As vertices are input, we can calculate edge slopes and we can scan the coordinate values to identify the minimum and maximum x, y and z values for individual polygons.

The more information included in the data tables will be easier to check for errors. Some of the tests that could be performed by a graphics package are:

1. That every vertex is listed as an endpoint for at least two edges.

2. That every edge is part of at least one polygon.

3. That every polygon is closed.

4. That each polygon has at least one shared edge.

5.  That if the edge table contains pointers to polygons, every edge referenced by a polygon pointer has a reciprocal pointer back to the polygon.

To produce a display of a 3D object, we must process the input data representation for the object through several procedures such as,

-  Transformation of the modeling and world coordinate descriptions to viewing coordinates.

-  Then to device coordinates:

-  The application of surface-rendering procedures.

For these processes, we need information about the spatial orientation of the individual surface components of the object. This information is obtained from the vertex coordinate value and the equations that describe the polygon planes.

Where (x, y, z) is any point on the plane, and the coefficients A,B,C and D are constants describing the spatial properties of the plane.

We can obtain the values of A, B,C and D by solving a set of three plane equations using the coordinate values for three non collinear points in the plane.

The solution for this set of equations can be obtained in determinant form, using Cramer’s rule as

Expanding the determinants , we can write the calculations for the plane coefficients in the form:

As vertex values and other information are entered into the polygon data structure, values for A, B, C and D are computed for each polygon and stored with the other polygon data.

Plane equations are used also to identify the position of spatial points relative to the plane surfaces of an object. For any point (x, y, z) hot on a plane with parameters A,B,C,D, we have

We can identify the point as either inside or outside the plane surface according o the sigh (negative or positive) of Ax + By + Cz + D:

These inequality tests are valid in a right handed Cartesian system, provided the plane parmeters A,B,C and D were calculated using vertices selected in a counter clockwise order when viewing the surface in an outside-to-inside direction.

A single plane surface can be specified with a function such as fillArea. But when object surfaces are to be tiled, it is more convenient to specify the surface facets with a mesh function. One type of polygon mesh is the triangle strip.A triangle strip formed with 11 triangles connecting 13 vertices.

This function produces n-2 connected triangles given the coordinates for n vertices.

Another similar function in the quadrilateral mesh, which generates a mesh of (n-1) by (m-1) quadrilaterals, given the coordinates for an n by m array of vertices. Figure shows 20 vertices forming a mesh of 12 quadrilaterals.

Curved Lines and Surfaces Displays of three dimensional curved lines and surface can be generated from an input set of mathematical functions defining the objects or from a set of user specified data points. When functions are specified, a package can project the defining equations for a curve to the display plane and plot pixel positions along the path of the projected function. For surfaces, a functional description in decorated to produce a polygon-mesh approximation to the surface.

Spline Representations A Spline is a flexible strip used to produce a smooth curve through a designated set of points. Several small weights are distributed along the length of the strip to hold it in position on the drafting table as the curve is drawn.

The Spline curve refers to any sections curve formed with polynomial sections satisfying specified continuity conditions at the boundary of the pieces.

A Spline surface can be described with two sets of orthogonal spline curves. Splines are used in graphics applications to design curve and surface shapes, to digitize drawings for computer storage, and to specify animation paths for the objects or the camera in the scene. CAD applications for splines include the design of automobiles bodies, aircraft and spacecraft surfaces, and ship hulls.

Interpolation and Approximation Splines Spline curve can be specified by a set of coordinate positions called control points which indicates the general shape of the curve. These control points are fitted with piecewise continuous parametric polynomial functions in one of the two ways. 1. When polynomial sections are fitted so that the curve passes through each control point the resulting curve is said to interpolate the set of control points.

1. When the polynomials are fitted to the general control point path without necessarily passing through any control points, the resulting curve is said to approximate the set of control points.

For a smooth transition from one section of a piecewise parametric curve to the next various continuity conditions are needed at the connection points.

We set parametric continuity by matching the parametric derivatives of adjoining curve sections at their common boundary.

First order parametric continuity referred to as C1 continuity means that the first parametric derivatives of the coordinate functions in equation (a) for two successive curve sections are equal at their joining point.

Second order parametric continuity, or C2 continuity means that both the first and second parametric derivatives of the two curve sections are equal at their intersection.

To specify conditions for geometric continuity is an alternate method for joining two successive curve sections.

Zero order Geometric continuity referred as G0 continuity means that the two curves sections must have the same coordinate position at the boundary point.

First order Geometric Continuity referred as G1 continuity means that the parametric first derivatives are proportional at the interaction of two successive sections.

Second order Geometric continuity referred as G2 continuity means that both the first and second parametric derivatives of the two curve sections are proportional at their boundary. Here the curvatures of two sections will match at the joining position. 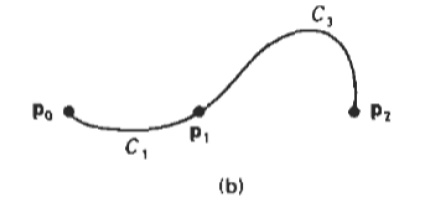 Spline specifications There are three methods to specify a spline representation:

1. We can state the set of boundary conditions that are imposed on the spline; (or)

2. We can state the matrix that characterizes the spline; (or)

3. We can state the set of blending functions that determine how specified geometric constraints on the curve are combined to calculate positions along the curve path.

To illustrate these three equivalent specifications, suppose we have the following parametric cubic polynomial representation for the x coordinate along the path of a spline section.

where U is the row matrix of power of parameter u and C is the coefficient column matrix. Using equation (2) we can write the boundary conditions in matrix form and solve for the coefficient matrix C as

Matrix Mgeom contains control point coordinate values and other geometric constraints. We can substitute the matrix representation for C into equation (2) to obtain.

Finally we can expand equation (4) to obtain a polynomial representation for coordinate x in terms of the geometric constraint parameters.

x(u) = Σ gk. BFk(u) where gk are the constraint parameters, such as the control point coordinates and slope of the curve at the control points and BFk(u) are the polynomial blending functions.