Home | | Introduction to Human Nutrition | Turnover of proteins and amino acid metabolism: Protein synthesis, degradation, and turnover
Posted On :  11.07.2017 10:28 am

The principal metabolic systems responsible for the maintenance of body protein and amino acid homeo-stasis are shown in Figure 4.5. They are:

The principal metabolic systems responsible for the maintenance of body protein and amino acid homeo-stasis are shown in Figure 4.5. They are:

●amino acid synthesis, in the case of the nutritionally dispensable or conditionally indispensable amino acids. 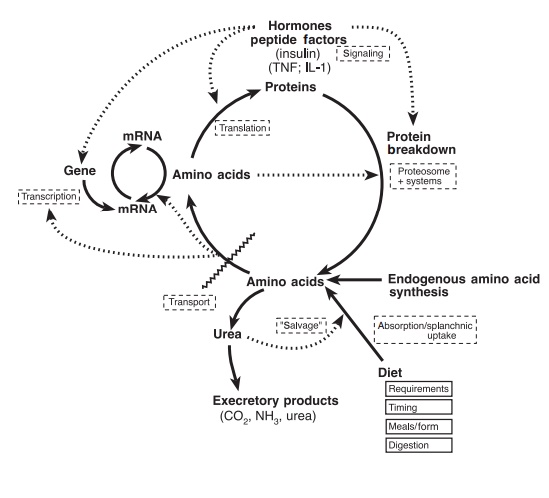 Figure 4.5 The major systems in amino acid uptake, utilization, and catabolism, with an indication of the processes involved and some factors that can affect them. TNF, tumor necro-sis factor, IL, interleukin.

Dietary and nutritional factors determine, in part, the dynamic status of these systems; such factors include the dietary intake levels relative to the host’s protein and amino acid requirements, the form and route of delivery of nutrients, i.e., parenteral (venous) and enteral (oral) nutritional support, and timing of intake during the day, especially in relation to the intake of the major energy-yielding substrates, which are the carbohydrates and fats in foods. Other factors, including hormones and immune system products, also regulate these systems. This will be a topic for discussion in the following volume. Changes in the rates and efficiencies of one or more of these systems lead to an adjustment in whole body nitrogen (protein) balance and retention, with the net direc-tion and the extent of the balance depending upon the sum of the interactions occurring among the pre-vailing factor(s).

In effect, there are two endogenous nitrogen cycles that determine the status of balance in body protein:

●the balance between intake and excretion

●the balance between protein synthesis and break-down (Figure 4.6).

Protein synthesis rates are high in the premature newborn, possibly about 11–14 g protein synthesized per kilogram of body weight per day, and these rates decline with growth and development so that in term babies and young adults these rates are about 7 g and

4–5 g protein/kg per day, respectively. Three points relevant to nutritional requirements may be drawn from these data. First, the higher rate of protein syn-thesis in the very young, compared with that in the adult, is related not only to the fact that a net deposi-tion of protein occurs during growth, which may account for about 30% of the total amount of protein synthesized in the 6 month old infant, but also to a high rate of protein turnover (synthesis and break-down) associated with tissue remodeling and repair, as well as to removal of abnormal proteins. In the adult the protein turnover is associated with cell and organ protein maintenance since there is no net tissue growth under most circumstances. Second, as will be seen later, at all ages in healthy subjects the rates of whole body protein synthesis and breakdown are considerably greater than usual intakes (the latter are about 1–1.5 g protein/kg per day in adults) or those levels of dietary protein thought to be just necessary to meet the body’s needs for nitrogen and amino acids (about 0.8 g protein/kg per day). It follows, therefore, that there is an extensive reutilization within the body of the amino acids liberated during the course of protein breakdown. If this were not the case it might be predicted that we would be obligate carnivores and this, undoubtedly, would have changed the course of human evolution. Third, although not evident from this discussion alone, there is a general as well as functional relationship between the basal energy metabolism or resting metabolic rate and the rate of whole body protein turnover. Protein synthe-sis and protein degradation are energy-requiring pro-cesses, as will be described elsewhere in these volumes, and from various studies, including interspecies com-ponents, it can be estimated that about 15–20 kJ (4– 5 kcal) of basal energy expenditure is expended in association with the formation of each gram of new protein synthesis and turnover. In other words, protein and amino acid metabolism may be respon-sible for about 20% of total basal energy metabolism. Because basal metabolic rate accounts for a significant proportion of total daily energy expenditure, it should be clear from this discussion that there are significant, quantitative interrelationships between energy and protein metabolism and their nutritional require-ments. For these reasons it would not be difficult to appreciate that both the level of dietary protein and the level of dietary energy can influence the balance between rates of protein synthesis and protein break-down and so affect body nitrogen balance. Their effects are interdependent and their interactions can be complex. This can be illustrated by the changes in body nitrogen balance that occur for different protein and energy intakes (Figure 4.7); as seen here, the level of energy intake, whether above or below require-ments, determines the degree of change in the nitro-gen balance that occurs in response to a change in nitrogen intake. Conversely, the level of nitrogen intake determines the quantitative effect of energy intake on nitrogen balance. Therefore, optimum body protein nutrition is achieved when protein and 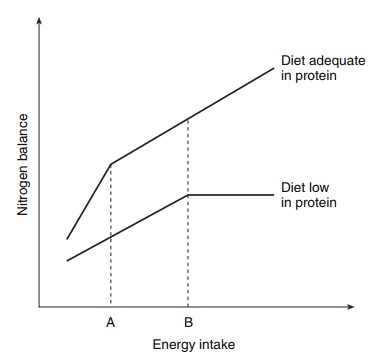 energy intakes (from sources such as carbohydrates and lipids) are sufficient to meet or balance the needs for amino acids, nitrogen, and the daily energy expen-diture or, in the case of growth, the additional energy deposited in new tissues.