Structure and chemistry of amino acids

With the exception of proline, the amino acids that make up peptides and proteins have the same central structure.

Structure and chemistry of amino acids

With the exception of proline, the amino acids that make up peptides and proteins have the same central structure (Figure 4.1; the A in this figure and 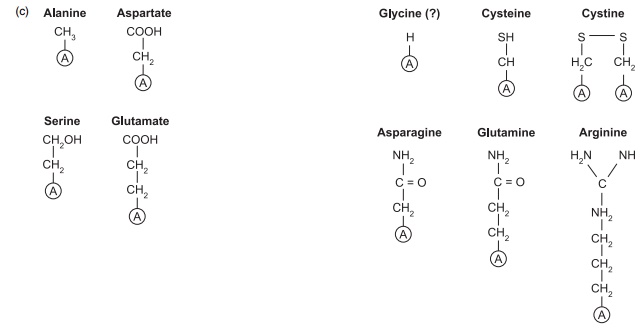 amino acids within the linear peptide structure, while the side-chains distinguish the physical and chemical properties of each chemical class of amino acid. In addition, some features of the amino acid side-chains are critical to the metabolic and physiological roles of free, as opposed to protein-bound, amino acids (Table 4.3; Figures 4.1 and 4.2). These roles are reflections of 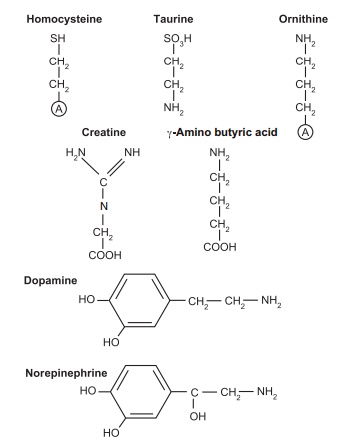 Figure 4.2 Physiologically important amino acid metabolites. Both the metabolic relationship between alanine and glutamic acid and their transamination partners, the keto acids pyruvate and α-ketoglutarate, and the similarity between the catabolic oxidation pathway of the branched-chain amino acids and the β-oxidation pathway of saturated fatty acids are shown.

either their specific chemical properties or specific metabolic interrelationships. Examples of the former are the facility of methionine to donate a methyl group in one-carbon metabolism, the propensity for the amide group of glutamine to serve as a nitrogen source for pyrimidine synthesis, or the sulfhydryl group of cysteine forming disulfide bonds for cross-linking. The former metabolic relationship allows alanine and glutamate (and glutamine) to provide a link between carbohydrate and protein metabolism; the latter enables the branched amino acids to function when required, as a “universal” fuel throughout the body.

Some of these amino acid and nitrogen compounds are derivatives of other amino acids:

●creatine is formed from glycine, arginine, and methionine and serves in intracellular energy transduction

●      dopamine is formed from tyrosine and fulfills a neurotransmitter function

● ornithine can be formed from glutamate and serves as both an intermediate in the urea cycle and a precursor of the polyamines spermine and spermi-dine, which are used in DNA packaging.

Finally, other amino acids (Figure 4.3) appear in pro-teins via a post-translational modification of a specific amino acid residue in the polypeptide chain that is being formed during protein synthesis. 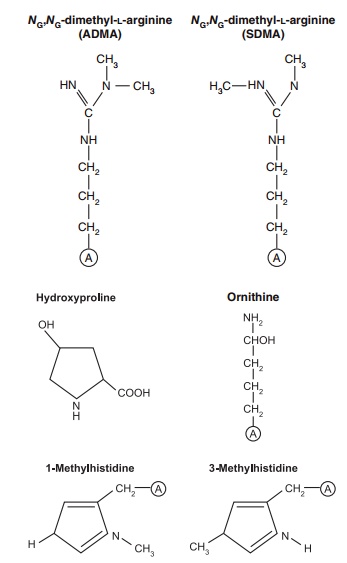 Figure 4.3 Some amino acids that arise via a post-translational modi-fication of a polypeptide-bound amino acid. These amino acids are not coded by DNA but are important determinants of the structural and functional characteristics of proteins. Shown are (1) the formation of hydroxyproline, from proline, involved in the maturation of the differ-ent types of collagens in cells; (2) the methylation of a specific histidine in the muscle protein actin (it could be that this modification gives this protein its ability to function effectively in the contractile activities of the skeletal muscles that help us to move about); and (3) the methyla-tion of arginine to form asymmetric and symmetric dimethylarginine, which serve as an endogenous nitric oxide synthase inhibitor and play important roles in modulating nitric oxide production and organ blood flow in health and diseased conditions.

In addition to serving the function as precursors for protein synthesis, amino acids also serve as signal-ing molecules modulating the process of protein synthesis. The translation of mRNA into protein in skeletal muscle is initiated from (1) the binding of met-tRNA to the 40S ribosomal subunit to form the 43S preinitiation complex; (2) the subsequent binding of this complex to mRNA and its localization to the AUG start codon; and (3) the release of the initiation factors from the 40S ribosomal complex to allow the formation of the 80S ribosomal complex via the joining of the 60S ribosomal subunit. Then the 80S ribosomal complex proceeds to the elongation stage of translation. The formation of the 43S preinitiation complex is mediated by a heterotrimeric complex of eIF–4F proteins. The signaling pathway regulating mRNA translation involves the protein kinase termed the mammalian target of rapamycin (mTOR). mTOR regulates the formation of the eIF–4F complex via a series of phosphorylation–dephosphorylation pro-cesses of the downstream targets. The mTOR signal-ing pathway is traditionally considered to be solely involved in mediating the action of hormones. Recent studies revealed that the branched-chain amino acids, especially leucine, serve a unique role in regulating mRNA translation via the same mTOR-signaling pathway. Increased availability of leucine activates the mTOR and its downstream targets. However, inhibi-tion of the mTOR pathway by rapamycine partially inhibits the stimulatory effect of leucine on protein synthesis, indicating the involvement of an mTOR-independent signaling pathway by leucine in the reg-ulation of protein synthesis. The detailed mechanisms involved in these regulations, especially those of the mTOR-independent pathways, remain an active field of research.

For example, glycine is an important anti-inflamma-tory, immunomodulatory, and cytoprotective agent through the glycine receptor on the cell surface. The role of cysteine in regulating glutathione synthesis and its role in protection against oxidative damage has been well established. The physiology of the argi-nine–nitric oxide pathway has also been an active area of investigation. In general, these nonprotein func-tions of amino acids serve important functions in the maintenance of (1) immune and other protective functions; (2) digestive function; and (3) cognitive and neuromuscular function. It is also worth noting that these functions are primarily exerted by nutri-tionally dispensable amino acids. Hence, the de novo synthesis pathways and/or the amount of exogenous supply of these amino acids or their precursors are important in modulating the physiological and patho-physiological conditions. 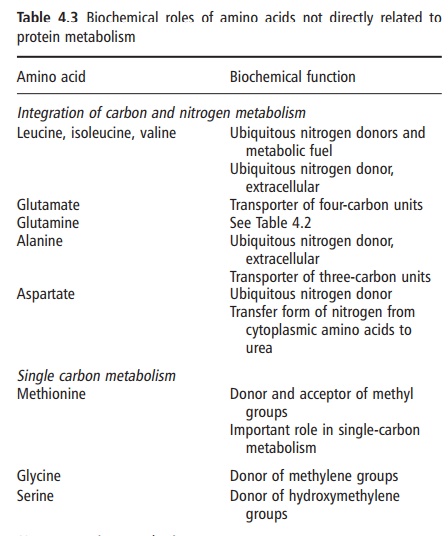 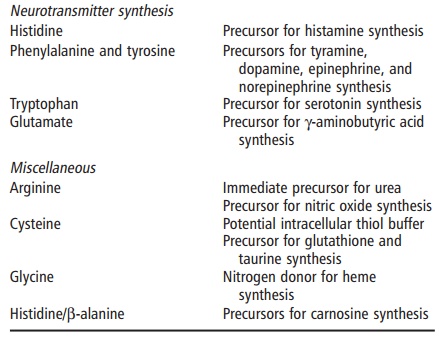