“Indispensability” as a basis of classification

For most of the past 65 years amino acids have been divided into two general, nutritional categories: indis-pensable (essential) and dispensable (nonessential). This categorization provided a convenient and gener-ally useful way of viewing amino acid nutrition at the time. The original definition of an indispensable amino acid was:

One which cannot be synthesized by the animal organism out of materials ordinarily available to the cells at a speed commensurate with the demands for normal growth.

There are three important phrases in this definition: ordinarily available, at a speed and for normal growth.

The phrase “ordinarily available” is an important qualifier within this definition because a number of nutritionally essential amino acids, for example the branched-chain amino acids, phenylalanine and methionine, can be synthesized by transamination of their analogous α-keto acids. However, these keto acids are not normally part of the diet and so are not “ordinarily available to the cells.” They may be used in special situations such as in nitrogen-accumulating diseases, including renal failure, where they may assist in maintaining a better status of body nitrogen metabolism.

The phrase “at a speed” is equally important because there are circumstances in which the rate of synthesis of an amino acid may be constrained, such as by the availability of appropriate quantities of “nonessential” nitrogen. Further, the rate of synthesis becomes of particular importance when considering a group of amino acids, exemplified by arginine, cysteine, proline, and probably glycine. These amino acids are frequently described as being conditionally indispensable. That is, their indispensability is depen-dent upon the physiological or pathophysiological condition of the individual.

Finally, the phrase “normal growth” is critical in two respects. First, it serves to emphasize that the defi-nitions were originally constructed in the context of growth. For example, for the growing rat arginine is an indispensable amino acid, but the adult rat does not require the presence of arginine in the diet and so it becomes a dispensable amino acid at that later stage of the life cycle. Of course, if the capacity to synthesize arginine is compromised by removing a significant part of the intestine which produces citrulline, a precursor of arginine, then the adult rat once again requires arginine as part of an adequate diet. Second, by confining the definition to growth, this fails to consider the importance of amino acids to pathways of disposal other than protein deposition. This aspect of amino acid utilization will be considered below.

Chemical and metabolic characteristics as bases of classification

It is also possible to classify amino acids according to their chemical and metabolic characteristics rather than on the basis of their need for growth. Examination of the amino acids that are generally considered to be nutritionally indispensable for humans and most other mammals indicates that each has a specific structural feature, the synthesis of which cannot be accomplished owing to the absence of the necessary mammalian enzyme(s) (Table 4.4). Indeed, in obliga- tory carnivores, such as cats, the further loss of some critical enzyme(s) renders these animals particularly dependent on dietary sources of specific amino acids, such as arginine. The lack of arginine in a single meal when given to a cat can be fatal. However, even within this view, the important term is “de novo synthesis” because some amino acids can be synthesized from precursors that are structurally very similar. For example, methionine can be synthesized both by transamination of its keto acid analogue and by remethylation of homocysteine. According to this metabolic assessment of amino acids, threonine and lysine are the only amino acids that cannot be formed via transamination or via conversion from another carbon precursor. In this narrower metabolic view, they are truly indispensable amino acids. A contem-porary nutritional classification of amino acids in human nutrition is given in Table 4.5. 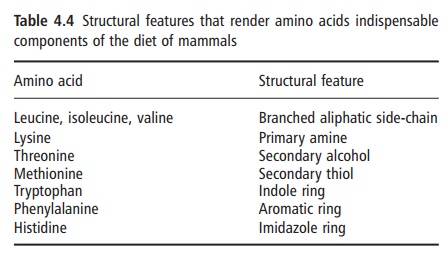 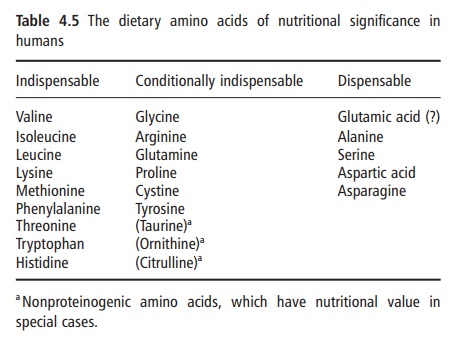 Strictly speaking, a truly dispensable amino acid is one that can be synthesized de novo from a nonamino acid source of nitrogen (e.g., ammonium ion) and a carbon source (e.g., glucose). Accordingly, and from a knowledge of biochemical pathways, the only true metabolically indispensable amino acid is glutamic acid, and possibly also glycine. This is because they can be synthesized from glucose and ammonium ions, in the case of glutamate, and from carbon dioxide and ammonium ions, in the case of glycine. However, the in vivo conditions may differ in both qualitative and quantitative terms from studies in test-tubes or in isolated cells in culture; amino acid metabolism in vivo is inherently more complex than is immediately evident from a simple consideration of biochemical pathways alone.

Sources of nonspecific nitrogen for humans

In earlier texts it would have been stated that, given a sufficient intake of the indispensable amino acids, all that is then additionally needed to support body protein and nitrogen metabolism would be a source of “nonspecific” nitrogen (NSN) and that this could be in the form of a simple nitrogen-containing mixture, such as urea and diammonium citrate. However, this is no longer a sufficient description of what is actually required to sustain an adequate state of protein nutriture in the human. This can be illus-trated by considering the nitrogen cycle, on which all life ultimately depends (Figure 4.4). From this it can be seen that some organisms are capable of fixing atmospheric nitrogen into ammonia, and plants are able to use either the ammonia or soluble nitrates (which are reduced to ammonia) produced by nitrifying bacteria. However, vertebrates, including humans, must obtain dietary nitrogen in the form of amino acids or other organic compounds, possibly as urea and purine and pyrimidines. Glutamate and glutamine provide a critical entry of the ammonia from the nitrogen cycle into other amino acids. It is, therefore, important to examine briefly the way in which the human body may obtain this NSN so as to maintain the nitrogen economy of the individual.

Ammonia can be introduced into amino acids by ubiquitous glutamate ammonia ligase (glutamine synthetase) that catalyzes the following reaction: 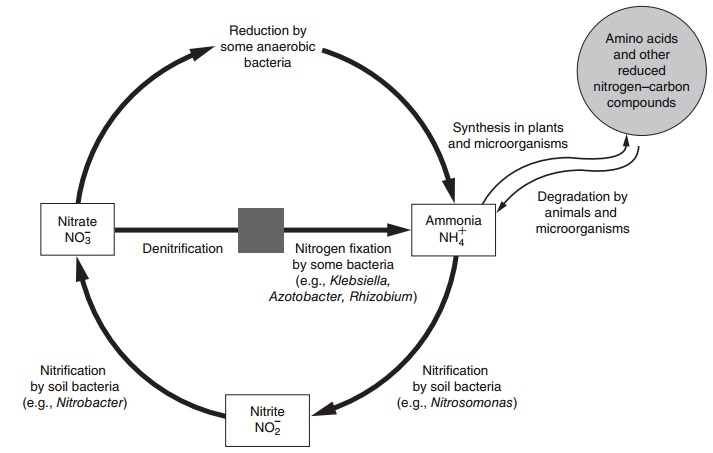 Figure 4.4 The nitrogen cycle. The most abundant form of nitrogen is present in air, which is four-fifths molecular nitrogen (N2). The total amount of nitrogen that is fixed in the biosphere exceeds 1011 kg annually. Reproduced from Lehninger AL, Nelson DL, Cox MM. Principles of Biochemistry, 2nd edn. New York: Worth, 1993.

In bacteria and plant chloroplasts, glutamate is produced by the action of glutamate synthase, according to the reaction:

The sum of the glutamate synthase (eqn 4.3) and glutamine synthetase (eqn 4.1) reactions is, therefore:

Hence, the two reactions combined (eqn 4.4) give a net synthesis of one molecule of glutamate. However, because glutamate synthetase is not present in animal tissues, a net incorporation of ammonia nitrogen via this nitrogen cycle arises primarily from glutamate rather than from glutamine. A net accumulation of glutamine would be achieved via the glutamine syn-thetase reaction that uses ammonia, which would be derived from various sources including glutamate or other amino acids or via hydrolysis of urea by the microflora on the intestinal lumen.

A net incorporation of ammonia into glycine might also be achieved via the glycine synthase (glycine cleavage) reaction, as follows:

The glycine could then be incorporated into proteins and into such compounds as glutathione, creatine, and the porphyrins, as well as being converted to serine. The nitrogen of serine would then either be available for cysteine (and taurine) synthesis or be released as ammonia via the serine dehydratase reac-tion. However, the glycine cleavage reaction appears to be more important in glycine catabolism than for its synthesis. Therefore, the glycine–serine pathway of ammonia incorporation into the amino acid economy of the organism would appear to have only a limited effect on a net nitrogen input into the amino acid economy of the body. Serine can be formed from glucose via 3-phosphoglycerate, which comes from carbohydrate metabolism, and its nitrogen obtained from glutamic acid synthesis via transamination with 2-ketoglutarate.

This suggests, therefore, the possibility that gluta-mate is a key amino acid in making net amino nitrogen available to the mammalian organism; this glutamate would be derived ultimately from plant protein. In this sense, glutamate or its lower homo-logue, aspartic acid, which could supply the α-amino nitrogen for glutamate, or its derivative, glutamine, would be required as a source of α-amino nitrogen. While additional research is necessary to determine whether glutamate, or one of these metabolically related amino acids, would be the most efficient source of α-amino nitrogen, these considerations potentially offer a new perspective on the NSN com-ponent of the total protein requirement. In 1965, a United Nations expert group stated:

This statement can just as well be repeated today, but clearly recent studies are beginning to provide deeper metabolic insights into the nature of the NSN needs of the human body.

A contemporary nutritional classification of amino acids in human nutrition is given in Table 4.5 and some points should be made here about the “condi-tionally” indispensable amino acids, a term that is used to indicate that there are measurable limitations to the rate at which they can be synthesized. There are several important determinants. First, their synthesis requires the provision of another amino acid, either as the carbon donor (e.g., citrulline in the case of argi-nine synthesis or serine in the case of glycine synthe-sis) or as a donor of an accessory group (e.g., the sulfur group of methionine for cysteine synthesis). The ability of the organism to synthesize a conditionally essential amino acid is, therefore, set by the availabil-ity of its amino acid precursor. Second, some of these amino acids are synthesized in only a limited number of tissues. The best example of this is the crucial dependence of the synthesis of proline and arginine on intestinal metabolism. Third, most evidence sug- gests that, even in the presence of abundant quantities of the appropriate precursors, the quantities of condi-tionally essential amino acids that can be synthesized may be quite limited. Thus, there are circumstances, for example in immaturity and during stress, under which the metabolic demands for the amino acids rise to values that are beyond the biosynthetic capacity of the organism. This appears to be the case with regard to the proline and arginine nutrition of severely burned individuals, and cysteine and perhaps glycine in the nutrition of prematurely delivered infants.