Having considered the biology of protein and protein requirements, this section now considers how these factors may be used to estimate the requirement for protein and for amino acids.

Nitrogen balance and definition of requirement

The starting point for estimating total protein needs has been, in most studies, the measurement of the amount of dietary nitrogen needed for zero nitrogen balance, or equilibrium, in adults. In the growing infant and child and in women during pregnancy and lactation, or when repletion is necessary following trauma and infection, for example, there will be an additional requirement associated with the net depo-sition of protein in new tissue and that due to secre-tion of milk. Thus, a United Nations (UN) Expert Consultation in 1985 defined the dietary need for protein as follows.

The protein requirement of an individual is defined as the lowest level of dietary protein intake that will balance the losses from the body in persons maintaining energy balance at modest levels of physical activity. In children and pregnant or lactating women, the protein requirement is taken to also include the needs associated with the deposition of tissues or the secretion of milk at rates consistent with good health.

Most estimates of human protein requirements have been obtained directly, or indirectly, from measurements of nitrogen excretion and balance (Nitrogen balance = Nitrogen intake – Nitrogen excretion via urine, feces, skin, and other minor routes of nitrogen loss). It must be recognized that the nitro-gen balance technique has serious technical and inter-pretative limitations and so it cannot serve as an entirely secure or sufficient basis for establishing the protein and amino acid needs for human subjects. Thus, there are:

●      a number of experimental requirements that must be met if reliable nitrogen balance data are to be obtained.

●      the need to match closely energy intake with energy need, for the various reasons discussed earlier

●timing and completeness of urine collections

●absence of mild infections and of other sources of stress.

Reference to detailed reviews of the concepts behind and techniques involved in the nitrogen balance approach.

When direct nitrogen balance determinations of the protein requirement data are lacking, as is the case for a number of age groups, an interpolation of requirements between two age groups is usually made simply on the basis of body weight considerations. A factorial approach may also be applied; here, the so-called obligatory urine and fecal nitrogen losses are determined (after about 4–6 days of adaptation to a protein-free diet in adults), summated together with other obligatory losses, including those via sweat and the integument. For children, estimates of nitrogen deposition or retention are also included. In the case of very young infants the recommendations for meeting protein requirements are usually based on estimated protein intakes by fully breast-fed infants.

The protein requirements for young adult men and women have been based on both short- and long-term nitrogen balance studies. This also applies to healthy elderly people, whose protein requirements have been judged not to be different from those of younger adults. In order to make practical recom-mendations to cover the requirements for most indi-viduals, it is necessary to adjust the average or mean requirement for a group by a factor that accounts for the variation in protein requirements among appar-ently similar individuals in that group. This factor is usually taken to be the coefficient of variation (CV) around the mean requirement and traditionally a value of 2 × CV (SD/mean) is added to the mean physiological requirement, so that the needs of all but 2.5% of individuals within the population would be covered. This adjusted requirement value is taken to be the safe practical protein intake for the healthy adult (Table 4.8). Most individuals would require less than this intake to maintain an adequate protein nutritional status. 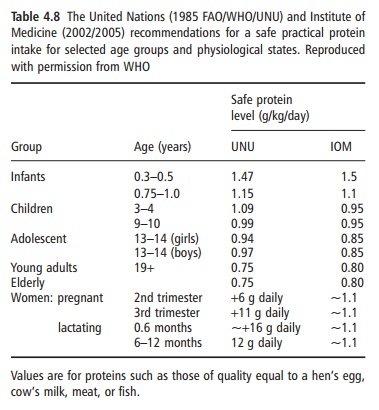 It is worth emphasizing two points. First, the current UN recommendations shown in Table 4.8 apply to healthy individuals of all ages. However, it is highly likely that the needs of sick or less healthy patients would differ from and usually exceed those of healthy subjects. In this case, the values given in this table can be regarded only as a basis from which to begin an evaluation of how disease and stress, including surgery, affect the needs for dietary protein. Unfortunately, the quantitative needs for protein (total nitrogen) in sick, hospitalized patients can be only very crudely approximated at this time.

Second, the values shown in Table 4.8 apply to high-quality food proteins, such as eggs, milk, meat, and fish. The differing nutritional value of food pro-teins will be considered below.

It is possible to modify slightly the earlier definition for the requirements for protein (nitrogen) for a spe-cific, indispensable amino acid, which can be stated, therefore, as: . . . . the lowest level of intake of an indispensable amino acid that achieves nitrogen balance or that balances the irreversible oxidative loss of the amino acid, without requiring major changes in normal protein turnover and where there is energy balance with a modest level of physical activity. For infants, children and preg-nant and lactating women, the requirements for the amino acid will include the additional amount of the amino acid needed for net protein deposition by the infant, child or fetus and con-ceptus and for the synthesis and secretion of milk proteins.

The foregoing is an operational definition of requirement, as in the case of protein. Ideally, a func-tional definition and determination of these require-ments inherently would be preferable. However, the choice and nature of the functional index or (indices) (such as maximum resistance to disease or enhanced physical performance) and its quantitative definition remain a challenge for future nutrition and health-related research.

In general, the approaches and methods that have been most often used to determine specific indis-pensable amino acid requirements are similar to those used for estimation of total protein needs, i.e., nitrogen excretion and balance and factorial estimation. Thus, amino acid requirements have been assessed by nitrogen balance in adults, and by determining the amounts needed for normal growth and nitrogen balance in infants, preschool children, and school-aged children. For infants, they have also been approached by assessment of the intakes pro-vided by breast milk or those supplied from intakes of good-quality proteins. In addition, factorial pre-dictions of the amino acid requirements of infants and adults have been made. One such factorial approach for use in adults includes the following assumptions.

· The total obligatory nitrogen losses (those losses occurring after about 4–6 days of adjustment to a protein-free diet) are taken to be approximately 54 mg/kg nitrogen per day in an adult, or equiva-lent to 0.36 g protein/kg/day.

·           The average amino acid composition of body pro-teins can be used to estimate the contribution made by each amino acid to this obligatory nitrogen output (equivalent, therefore, to the obligatory amino acid losses).

· At requirement intake levels, an absorbed amino acid is used to balance its obligatory oxidative loss with an assumed efficiency of about 70%.

This predictive or factorial approach is analogous to the factorial method for estimating the total nitro-gen (protein) requirement of individuals at various ages (where various routes of nitrogen excretion and nitrogen gains are summated and an efficiency factor is used to estimate the intake needed to balance this summation).

With advances in the routine measurement of stable isotope enrichment in biological matrices and the expanded use of tracers enriched with these isotopes in human metabolic research, a series of tracer studies was begun at the Massachusetts Institute of Tech-nology, USA, in the early 1980s to determine amino acid requirements in adults. Since that time several research groups have used different paradigms in tracer-based studies of human amino acid require-ments. These can be distinguished according to the choice of tracer and protocol design applied:

●      studies involving the use of a labeled tracer of the dietary amino acid being tested and with its rate of oxidation (O) at various test intake levels [thedirect amino acid oxidation (DAAO) technique, e.g., [13C]-lysine as a tracer to determine the lysine requirement]; this technique has been used to assess the requirements in adults for leucine, valine, lysine, threonine, and phenylalanine

of the IAAO and IAAB approaches are where the rate of [13C]-phenylalanine oxidation (Figure 4.9) is measured or a [13C]-leucine balance determined at varying levels of lysine intake to estimate the lysine requirement an extensive use in studies of human amino acid requirements.

●      kinetic studies designed to assess the retention of protein during the postprandial phase of amino acid metabolism, using [13C]-leucine as a tracer: the postprandial protein utilization (PPU) approach; this last and promising approach has not yet found 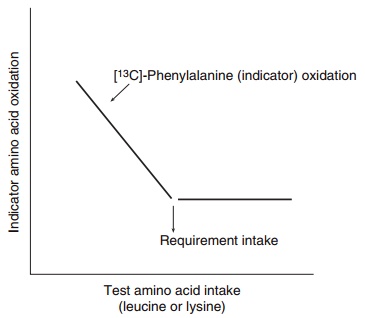 Figure 4.9 Outline of the concept of the indicator amino acid oxida-tion technique for estimation of indispensable amino acid require-ments. Here the indicator is [13C]-phenylalanine and the dietary requirement is being estimated for either leucine or lysine.

None of these methods is without its limitations, but at present the IAAO and IAAB approaches, involving tracer studies lasting for a continuous 24 hour day, would appear to be the “reference method” for esti-mating amino acid requirements in adults.

There is still debate and uncertainty about the precise requirements for amino acids in humans of all ages. Three major sets of proposed amino acid require-ment values for healthy subjects should be noted in this text. First, there are the requirements proposed by the UN in 1985 for the various age groups, which are presented in Table 4.9. Second, another expert group in 1994 (International Dietary Energy Consultancy Group; IDECG) also assessed the amino acid needs of infants by using a factorial method and these turned out to be much lower than those shown in Table 4.9 for infants. It should be noted, however, that the 1994 IDECG values approximate the aver-age requirements, whereas the requirement intakes derived from estimates of breast milk intake (shown in Table 4.9) would be expected to be well above the requirement for virtually all infants and certainly well above the mean or average requirement. It is not surprising, therefore, that the UN and IDECG require-ments disagreed. This also shows why recommenda-tions by different national and international expert groups differ; they interpret the same data differently, use different data, and also may choose to set differ-ent criteria for judging the adequacy of intake.

Further, as is characteristic of various estimates of human nutrient requirements in general, it must be appreciated that the values given in Table 4.9 are based on limited data; the values for the preschool children are derived from a single set of investigations carried out at the Institute for Central America and Panama, while those for the school-aged children come from studies conducted by a single group of investigators in Japan. Those for adults are based pri-marily on the nitrogen balance studies in men carried out in the 1950s and 1960s. There are multiple reasons for questioning the precise reliability and nutritional significance of the adult values, and they include the facts that adult amino acid requirement values (Table 4.9) are greatly influenced by:

●the inappropriate experimental design used earlier for estimation of requirements

Therefore, some contemporary and newly pro-posed amino acid requirement estimates for adults are shown in Table 4.10. The more recent values are generally very different from the recommendations made in 1985. It is important to remain alert in nutri-tion, as these texts will emphasize. At the time of writing the original text, a new UN expert group was meeting to consider all of the new data that had been accumulated in the past 20 years. It was expected that new recommendations would be made in 2002 or 2003, but, since they have not been published, the recommendations by the Institute of Medicine of the US Academies of Science have been added as a sepa-rate column in Table 4.10. The important point, however, is that all is not set in stone. Nutritional knowledge continues to advance, and with it the rec-ommendations must change or at least be responsive to this new information.