M. tuberculosis is susceptible to several effective antimicrobics (Table 28 – 2). Isoniazid,ethambutol, rifampin, pyrazinamide, streptomycin, and combinations of these agents constitute the primary drugs of choice for treatment of tuberculosis.

M. tuberculosis is susceptible to several effective antimicrobics (Table 28 – 2). Isoniazid,ethambutol, rifampin, pyrazinamide, streptomycin, and combinations of these agents constitute the primary drugs of choice for treatment of tuberculosis. All of these, except ethambutol, are bactericidal. Isoniazid and rifampin are active against both intra- and ex-tracellular organisms, and pyrazinamide, a nicotinamide analog, acts at the acidic pH found within cells. Streptomycin does not penetrate into cells and is thus active only against extracellular organisms. M. tuberculosis is also susceptible to other drugs that may be used to replace those of the primary group if they are inappropriate because of resistance or drug toxicity. The fluoroquinolones, such as ciprofloxacin and ofloxacin, are active against M. tuberculosis and penetrate well into infected cells. Their role in the treatment of tuberculosis is under evaluation. Isoniazid and ethambutol act on the my-colic acid (isoniazid) and LAM (ethambutol) elements of mycobacterial cell wall syn-thesis. The molecular targets of the other agents have yet to be defined except for the general antibacterial agents (rifampin, streptomycin, fluoroquinolones). 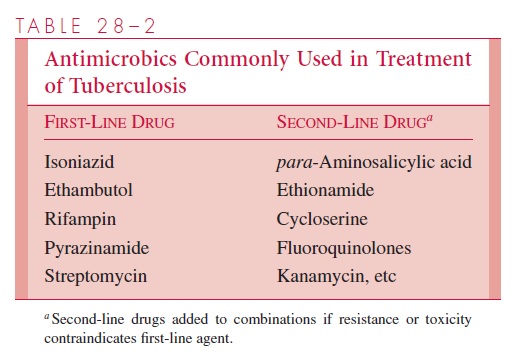 Mutational resistance to antituberculous drugs occurs at frequencies of 10 7 to 10 10. For example, mutation in a gene coding for a catalase-peroxidase enzyme causes failure of the conversion of isoniazid to its biologically active form. Such mutants often come to predominate and produce clinical relapse particularly when a single drug is used. Adequate, continuous treatment with two or three antituberculous drugs with different modes of action greatly reduces the probability a mutant will be expressed, because the chance of a doubly resistant mutant in a lesion’s organism population is very low. The proportion of infections with strains resistant to first-line drugs varies between 5 and 15% but appears to be increasing in many locales, particularly among individuals who have been treated previously. Of particular concern is the establishment in the last decade of strains resistant to both isoniazid and rifampin, the mainstays of primary treat-ment. Susceptibility tests are required to guide drug selection.

Treatment with multiple antimicrobics to which the organism is susceptible usually renders the patient noninfectious within 1 or 2 weeks, which has shifted the care of tuber-culous patients from isolation hospitals and sanatoriums to the home or the general hospi-tal. After an initial intense phase of systemic chemotherapy, treatment is usually continued with oral antimicrobics for several months. Until recently, therapy with two oral agents, isoniazid and ethambutol, was continued for a total of 18 to 24 months. Studies have now demonstrated that therapy can be shortened to 9 months when isoniazid and rifampin are used concomitantly and to 6 months when pyrazinamide is added as a third agent. In patients whose organisms display resistance to one or more of these drugs, and in those with HIV infection, a more prolonged treatment course is used. The effectiveness of chemotherapy on most forms of tuberculosis has been dramatic and has greatly reduced the need for surgical procedures such as pulmonary lobectomy. Failure of chemotherapy is often associated with lack of adherence to the regimen by the patient, the presence of resistant organisms, or both.