The tuberculin skin test measures DTH to tuberculoprotein. PPD is standardized biologically against an international reference preparation, and its activity expressed in tuberculin units (TU).

The tuberculin skin test measures DTH to tuberculoprotein. PPD is standardized biologically against an international reference preparation, and its activity expressed in tuberculin units (TU). Most initial skin tests employ 5 TU (intermediate strength). When an unusually high degree of hypersensitivity or eye or skin tuberculosis is suspected, then 1 TU (first strength) or less is used initially to avoid the risk of an excessive reaction locally or at the site of a mycobacterial lesion.

The test most commonly performed involves intradermal injection that is read 48 to 72 hours later. An area of measured induration of 10 mm or more accompanied by ery-thema constitutes a positive reaction, although smaller areas of induration and erythema indicate a lesser degree of sensitization to mycobacterial proteins. No induration indicates a negative reaction. A positive PPD test indicates that the individual has been infected at some time with M. tuberculosis or with a strongly cross-reacting mycobacterium of an-other species. It carries no implication about the activity of the infection, which may have been simply a primary complex contracted 20 years previously.

A negative PPD test in a healthy individual indicates that he or she has not been in-fected with M. tuberculosis, is in the prehypersensitive stage of a primary infection, or has finally lost tuberculin sensitivity along with disappearance of antigen from an old primary complex. Patients with severe disseminated disease, those on steroid or immuno-suppressive drugs, or those with certain other diseases such as AIDS and measles, may also become anergic. They lose their tuberculin hypersensitivity and become more sus-ceptible to the disease. Induration below the 10-mm diameter criterion for positivity indi-cates low-level sensitization, which may be attributable to M. tuberculosis infection or to a cross-reacting mycobacterial infection.

The clinical value of the PPD test depends on the occurrence of primary infection in different age groups. Now, primary infection is sufficiently uncommon in much of the Western world that a negative test is frequently important in excluding tuberculosis. A positive test in infancy or childhood has significance in diagnosis and can often be used to trace a household or school source of infection. Epidemiologic surveys of tuberculin reac-tivity indicate trends in the incidence of infection and constitute the simplest way of mon-itoring the effectiveness of control measures.

If present in sufficient numbers, acid-fast bacilli can be detected microscopically in direct smears of clinical specimens or in smears of material concentrated for culture (see be-low). Smears are stained by the Ziehl – Neelsen procedure or one of its modifications, in-cluding the fluorescence staining method. About 65% of culture-positive sputum samples yield positive smears from concentrated specimens. These procedures are not specific for M. tuberculosis because other mycobacteria may have a similar morphology and may beetiologic agents of disease, members of the normal flora, or external contaminants. Their significance depends on the specimen. Acid-fast bacilli in sputum are highly significant for mycobacterial infection. A clean-voided male urine specimen, on the other hand, is often contaminated with Mycobacterium smegmatisfrom the prepuce, and the finding of acid-fast bacilli does not per se indicate infection. Bronchoscopy equipment and nasotra-cheal tubes or their lubricants are prone to contamination with free-living mycobacteria, and false conclusions have been drawn from smears of such preparations. The polymerase chain reaction has been reported to be useful in the direct diagnosis of tuberculosis by a number of investigators. To date, none of these techniques are practical for routine use in the clinical laboratory.

Cultural confirmation of a tentative diagnosis of tuberculosis is thus essential, and the organism must be isolated for identification and susceptibility testing. Specimens from protected sites, such as cerebrospinal fluid, bone marrow, pleural fluid, and ureteric urine, can be seeded directly to culture media used for M. tuberculosis isolation. Those samples inevitably contaminated with normal flora, such as sputum, gastric aspirations (cultured when sputum is not available, for example, in young children), or voided urine, are treated with alkali, acid, or a detergent germicide under conditions that kill the normal flora but allow many mycobacteria to survive because of their resistance to these agents. The most commonly used treatment now employs N-acetylcysteine to dissolve mucus, combined with the antibacterial effect of a weak sodium hydroxide solution. The material is concentrated by centrifugation or filtration, neutralized or washed, and inoculated onto culture media.

Cultures on solid media usually take 3 weeks or longer to show visible colonies. Growth may be detected radiometrically in about half the time by using liquid oleic acid – albumin broth containing 14C-labeled palmitic acid, which is metabolized by mycobacteria to liberate 14CO2. The labeled CO2 is detected in the space above the medium using an automated sampling procedure. Incorporation of a specific inhibitor of M. tuberculosis in a parallel vial increases the specificity of the test.

Whichever  procedure is used, specific identification of an isolated mycobacterium is essential. It may be achieved with a number of cultural and biochemical tests, including those shown in Table 28 – 1, but the process usually takes several weeks. More rapid re-sults can be obtained by high-resolution gas chromatographic analysis of fatty acids in mycobacterial colonies or by testing for homology between genetic probes of labeled my-cobacterial DNA and ribosomal RNA extracted from the strain under test. Specific probes are now available commercially for detecting M. tuberculosis and the Mycobacteriumavium – intracellulare complex. 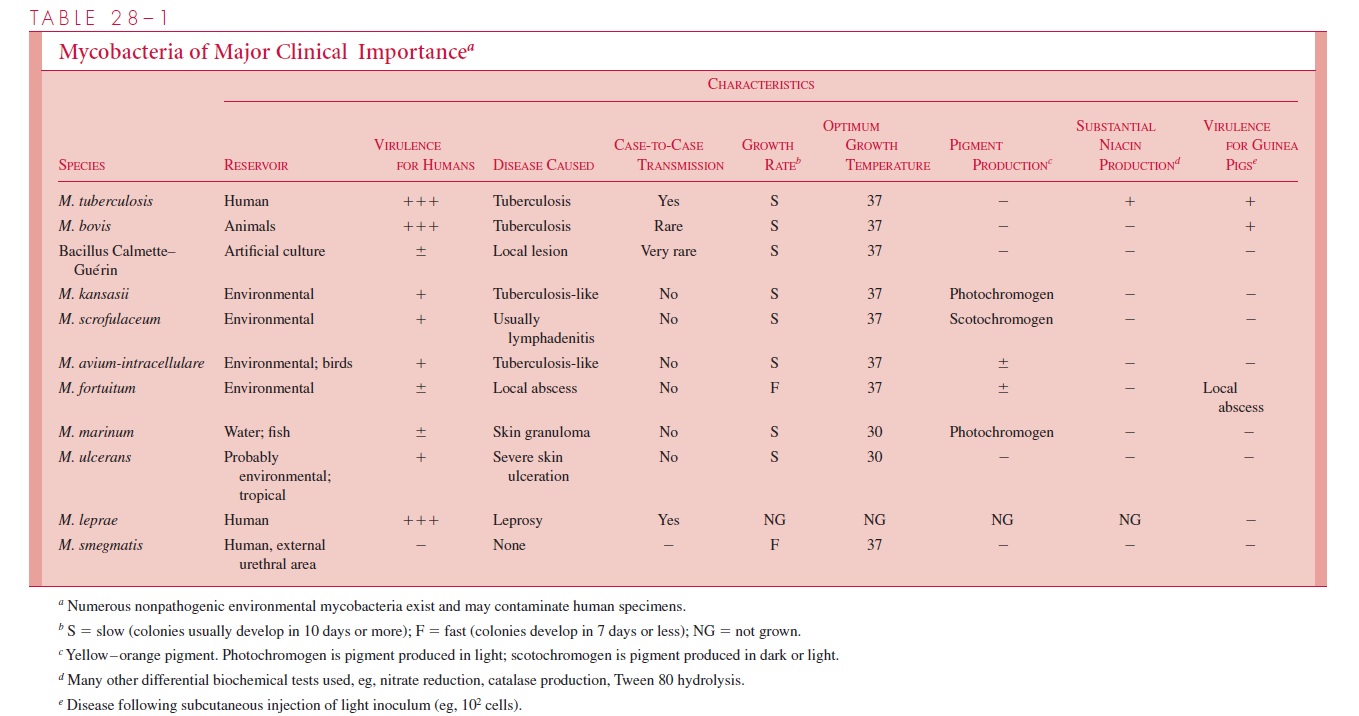 Susceptibility testing is important with newly diagnosed cases. When sufficient num-bers of acid-fast bacilli are seen on direct smears, the treated clinical specimen can be seeded directly onto antimicrobic-containing media for susceptibility tests, thereby saving several weeks. If numbers are scanty, the initiation of tests must await primary isolation. More rapid test results can be obtained by incorporating antimicrobics into the medium used for radiometric detection of mycobacterial growth. These results show good concor-dance with conventional tests and are available 1 to 2 weeks earlier.