A recognized disease of antiquity, tuberculosis first reached epidemic proportions in the western world during the major periods of urbanization in the 18th and 19th centuries.

A recognized disease of antiquity, tuberculosis first reached epidemic proportions in the western world during the major periods of urbanization in the 18th and 19th centuries. Mortality reached 200 to 700 per 100,000 population each year, accounting for 20 to 30% of all deaths in urban centers and winning tuberculosis the appellation of the “white plague.” Morbidity was many times higher. The disease has had major sociologic compo-nents, flourishing with ignorance, poverty, overcrowding, and poor hygiene, particularly during the social disruptions of war and economic depression. Under these conditions, the poor are the major victims, but all sectors of society are at risk. Chopin, Paganini, Rousseau, Goethe, Chekhov, Thoreau, Keats, Elizabeth Barrett Browning, and the Brontës, to name but a few, were all lost to tuberculosis in their intellectual prime. With knowledge of the cause and transmission of the disease and the development of effective antimicro-bial agents, tuberculosis was increasingly brought under control in developed countries. Unfortunately, mortality and morbidity remain at 19th-century levels in many developing countries despite extensive national and international control programs.

The great majority of tuberculous infections are contracted by inhalation of droplet nuclei carrying the causative organism. Humans may also be infected through the gastrointestinal tract following the ingestion of milk from tuberculous cows (now uncommon due to pasteur-ization) or, rarely, through abraded skin. It has been estimated that a single cough can gener-ate as many as 3000 infected droplet nuclei and that less than 10 bacilli may initiate a pul-monary infection in a susceptible individual. The likelihood of acquiring infection thus relates to the numbers of organisms in the sputum of an open case of the disease, the frequency and efficiency of the coughs, the closeness of contact, and the adequacy of ventilation in the con-tact area. Epidemiologic data indicate that large doses or prolonged exposure to smaller in-fecting doses is usually needed to initiate infection in humans. In some closed environments, such as a submarine or a crowded nursing home, a single open case of pulmonary tuberculo-sis can infect the majority of nonimmune individuals sharing sleeping accommodations.

In the past, an animal variant (Mycobacterium bovis) was transmitted by drinking milk from infected herds. This disease has been largely eliminated by eradication pro-grams and milk pasteurization.

The decline in mortality and occurrence of the disease in the United States over the last century is shown in Figure 28 – 2. Between 1953 to 1985 the number of new tubercu-losis cases per annum fell from 84,304 to 22,201. By the mid-1980s, it was estimated that only 4 to 5% of American citizens, and less than 1% of American children, demonstrated positive tuberculin skin tests. However, the decline was not uniform throughout the American populace, and case rates among nonwhites and the urban poor remained signif-icantly higher than the national average. As the incidence of infection in the United States and other developed countries decreased, there was also a major shift in the age of tuber-culosis patients. Most were over 50 years of age and represented cases in which an old primary lesion, quiescent for decades, became reactivated. The grandfather who has de-veloped “chronic bronchitis” is a classic source of infection to children. 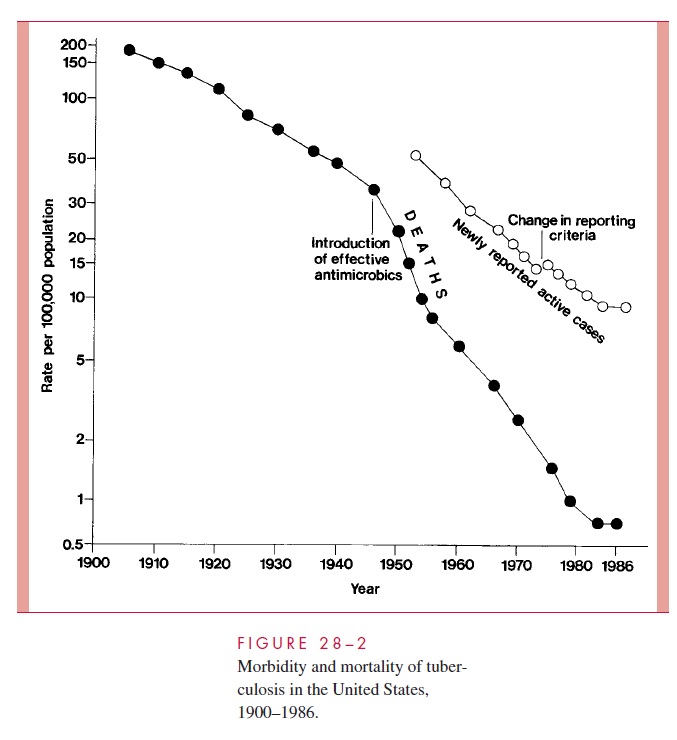 In 1985, the steady decline in reports of new tuberculosis cases and deaths in the United States ceased, and, in the ensuing 7 years, new cases increased by nearly 20%.

This change has been attributed to a significant decrease in the funding for tuberculosis control programs; spread of multiresistant strains of M. tuberculosis; increased immigra-tion from tuberculosis-endemic areas of the world; social and economic changes that con-tributed to a burgeoning of incarcerated intravenous drug users and homeless populations; and, finally, to the AIDS epidemic. It is estimated that patients with latent tuberculosis in-crease their risk of reactivation disease by factors of 200 to 300 with the development of a human immunodeficiency virus (HIV) coinfection. The per annum reactivation rate of such individuals is estimated at 8%.

Accompanying the increase in reactivation tuberculosis among high-risk US popula-tions was an increase in the transmission of M. tuberculosis. Annual tuberculin skin con-versions among intravenous drug abusers and the number of cases of tuberculosis among children under 5 years of age increased significantly between 1987 and 1990. Single-source epidemics involve school children and a teacher with unrecognized pulmonary tu-berculosis, homeless shelters, nursing homes, and medical personnel exposed to patients with unrecognized tuberculosis. Since 1992, a reinvigorated public health effort in the United States has, again, led to a declining number of individuals with active tuberculo-sis, reaching a new low of 18,361 in 1998. This represents a rate of 6.8/100,000 popula-tion, still well short of the nation’s interim goal of 3.5/100,000 for the year 2000 and 1/100,000 for the year 2010.

Globally, the situation is more ominous. It is estimated that one third of the world’s population is infected with M. tuberculosis; 30 million people have active disease, an additional 8 million develop new disease yearly, and 2 to 3 million die annually of this “captain of death.” As a result, tuberculosis is the leading cause of death from an infec-tious disease worldwide. It is thought responsible for 6% of all deaths and 26% of avoidable adult deaths. Particularly concerning for the future control of tuberculosis worldwide is the marked susceptibility of patients with AIDS and the growing resis-tance of M. tuberculosis to the currently available antimicrobic agents. Because 40% of all new cases of tuberculosis in the United States are among foreign-born individuals, the elimination of this disease in the United States will be impossible without a sub-stantial reduction in the global burden of tuberculosis.