When one look at the Banyan tree it will be seen that the branches and sub-branches are growing towards the light, but the Prop roots originated from the branches growing towards the earth. If a gram seed is kept on wet soil it will germinate within a few days. It will be seen that its radicle gradually develop and goes into the soil and plumule goes upwards against the soil. The movements of plant organ towards certain direction like light; earth or water is called tropism. The tropism maybe towards stimulant like light, earth or water or may against to those. Movement of plant organ towards the stimulant is called positive tropism. On the other hand movement against the stimulant is called negative tropism. Tropic movement towards light, earth, water and any chemical is described briefly: 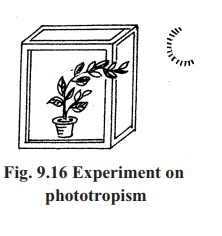 A seedling of gram or chili may demonstrate phototropism. Take a glass bottle with cork. Fill up the bottle with water. Insert the plant into the bottle through the cork so that the stem remains outside the cork and the roots remain inside being immersed in water. Place the bottle at a place where it gets light from one side. After one day it will be seen that the stem bends towards light but the tip of the root bends against light. Phototropism may also be demonstrated by putting a potted plant on a perforated wooden box. Leaves of plant manufacture food by using energy from sunlight and both plants and animals world depends on this food.

b) Geotropism : Movement of root is towards theearth and movement of stem is against the earth. A movement towards the earth is negative geotropism. Put a germinating gram seed on soil in a pot and keep the pot in such a closed room so that light cannot come from any direction. After one day it will be seen that the root of germinating gram seed bended and enter into the soil and the stem bended against the soil.

Majority of food for plants remain in earth. Root absorbs these foods. So the movement of root towards earth is quite significant. 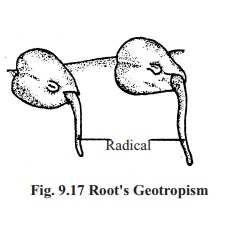