Water with dissolved mineral salts inside a cell is called Cell Sap or Sap. The apical region of root (Meristamatic region and root hair region) absorbs water and mineral salts from soil.

Water with dissolved mineral salts inside a cell is called Cell Sap or Sap. The apical region of root (Meristamatic region and root hair region) absorbs water and mineral salts from soil. The process by which the cell sap raises from absorption region to the leaf and other parts is called ascent of sap. This raising of sap takes place through Vessels and Tracheids of Xylem tissue. The root hairs are spread in the spaces between soil particles. In the spaces there are capillary water. The concentration of cell sap in the root hairs is more than the water and dissolved mineral salts in the soil. Thus water enters into the root hairs by osmosis. When water enters into the root hairs the concentration of its sap become less than the concentration of the sap of the adjacent cell. As a result water from root hair moves to adjacent cell by osmosis. In this way water moves from one cell to another and ultimately reaches the vessels of xylem tissue crossing the endodermis placed at the central region of the root. The vessel cells are tubular and are placed end to end forming a continuous tube  from  root  to  leaf.  Water  molecules  are attached  one  another  in  such  a  way  that  is called  Cohesion.  Water  molecules  are  also attached with the vessel walls this attachment is called Adhesion. Due to cohesion and adhesive force of vessels, and the pulling force (drawing force)  of  transpiration,  the  stream  of  water remain  continuous.  In  this  way  water  and dissolved mineral salts from root reach up to different  organs  like  branches,  leaves  and flowers etc. 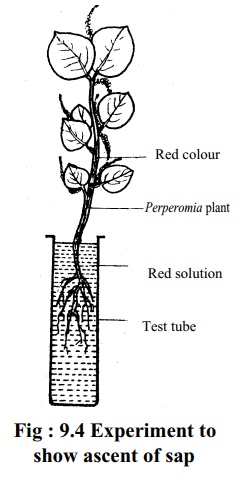 We  can  observe  ascent  of  sap  by  a  nice experiment in the laboratory. It will require a fresh Peperomia plant. The stem of Peperomia Plant is  transparent Partly fill up a beaker with water and make it red by mixing a small amount of safranin. Put the plant in the coloured water in such a way so that its roots remain submerged in coloured water. After few hours it will be seen that the stem of Peperomia plant become red because of gradual up rise of red water through the xylem tissue of the stem.