Photosynthesis is a complex and lengthy process. In 1905 A.D. Blackman divides the process into two phases namely: 1. Light Phase and 2. Dark Phase.

Photosynthesis is a biochemical process. In this process green parts (specially leaves) of plants manufacture carbohydrate food by CO2 and water with the help of energy obtained from sunlight. Here light energy is converted to chemical energy. Plants absorb CO2 and release O2 as bi-product in the process of photosynthesis. The components required for this process are: - (i) Light, (ii) Chlorophyll, (iii) Water and, (iv) Carbon dioxide (CO2).

Chlorophyll pigments are present in the chloroplasts of plant cells. Water absorbed by roots reaches to the mesophyll cells in the leaves. The process of photosynthesis is shown by the following reaction

''Photosynthesis is such a biochemical reaction by which chloroplast, in the plant cell, uses the energy, received from the photon of sunlight, manufactures carbohydrate food by CO2 of the atmosphere and water and other organic substances in the CO2 cell.

Photosynthesis is a complex and lengthy process. In 1905 A.D. Blackman divides the process into two phases namely: 1. Light Phase and 2. Dark Phase. Both the phases are described here: -

1. Light Phage: Light is essential for this phage. In this process water breaksdown to O2, e- (electron) and Hydrgen (proton = H+) by the help of energy obtained from sunlight. Such break down is called as Photolysis or Photolysisof water. Large amount of light energy is assimilated in chemical compoundnamed ATP (Adenocine Tri Phosphate) and NADPH2 (Nicotinamide Adenocine Dinucleotide Hydrogen Phosphate) as chemical energy. ATP and NADPH2  are called assimilatory Power. This process of formation  of  ATP  by  using  light  energy  is  called Photophosphorilation. Photophosphorilation  may be  of  two types -  Cyclic and Non-cyclic. Two pigment systems (Pigment system-1 and Pigment system-2) control the light phase of photosynthesis 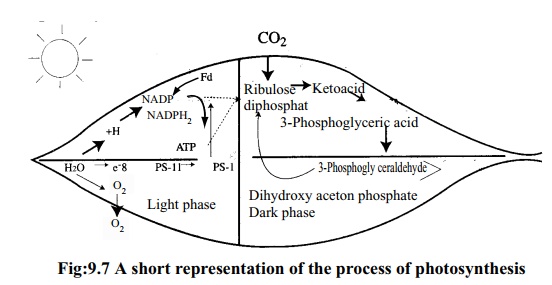 2. Dark Phase: Light is not required in this process. ATP a NADPH2,produced in light phase, are utilised in this process to manufacture carbohydrates. The process of manufacture of carbohydrate is as follows: - CO2, from atmosphere enters inside the leaf thus in the cell, through stomata. CO2 combined with Ribulose 1,5 Diphosphate, present in the ccll produces an unstable compound named Keto acid. This Keto acid later on break down into two molecules named a 3 -Carbon compound named 3-Phosphoglyceric acid (first stable compound). This Phosphoglyceric acid then converted to 3-Phosphoglyceraldehyde and Dihydroxy Acetone Phosphate utilising ATP and NADPH2, produced earlier in light phase. By several successive reactions these 3-Phosphoglyceric acid and Dihydroxi Aceton Phosphate ultimately produce Carbohydrate (Sucrose-Sugar) in one side and Ribulose 1,5, Diphosphate on the other side.

Another cycle of producing carbohydrate has discovered. It is called Hatch and Slack Pathway. In this process the first stable compound is a 4- Carbon compound, named oxalo-acetic acid. These types of plants are called C4 plants. Sugarcane, Maize, Cyprus grass etc. are examples of C4 plants. You will know more detailed in higher classes.

Factors involved in photosynthesis are of two types - External and Internal factors.

0. Sunlight: Sunlight is essential for photosynthesis. The high-energycompound - ATP and NADPH2 are formed utilising the Sunlight which help carbon reduction in dark phage. High intensity of light reduces the rate of Photosynthesis.

0. Carbon dioxide: Manufacture of carbohydrate is not possible withoutcarbon dioxide. Thus if the amount of CO2 reduces in air (in air there is 0.03% of CO) the rate of photosynthesis reduces.

0. Water: Water makes the guard cells turgid and the stomata opens. on theother hand water is utilised as a raw material in dark phase of the process.

0. Oxygen: If density of oxygen increases in atmosphere the rat ofphotosynthesis will decrease.

The importance of photosynthesis is unlimited. A short description is given regarding this: -

0. Manufacture of plant food: To live food is essential. Green plantsmanufacture food by the process of photosynthesis. If the green plant would not be able to manufacture food, then no plant could live in this world.

0. Source of Energy: Much energy is exhausted in our works and movements.Source of this energy is food. Green plants manufacture food by the process of photosynthesis. Energy comes to food from the Sun light energy trapped as chemical energy in foods manufacture by photosynthesis. Food breaks down in every living cell producing energy. Source of our all energy is food and source of energy of food is the sun. So Sun is the source of all energy. Energy that needs in metabolic activities in plants and animals come from food too.

0. Ecological Balance: In maintaining Ecological Balance particularlybalancing the ratio of O2 and CO2, photosynthesis plays a special role. The amount of oxygen gas in the airs 20.946% and that of carbon dioxide is 0.033%. This is the normal amount of oxygen and carbon dioxide gas in the atmosphere. For normal growth and living of plants and animals in this world, amount of these gases should be within normal range. On variation of the normal ratio the atmosphere will be imbalanced. We know respiration goes on in every living being (plants and animals). In respiration O2 gas is taken in and CO2 gas is driven out. Plants and animals both are taking O2 and releasing CO2 during respiration. If this system goes on successively there would have shortage of O2 and excess of CO2. But as green plants absorb CO2 and release O2 during Photosynthesis, so the ratio of O2 and CO2in the atmosphere is still all right. Due to excessive deforestation the ratio of these two gases in the atmosphere is being destroyed. Therefore, we should have to plant trees more and more.