Some Experiments on Photosynthesis

Some Experiments on Photosynthesis:

1. Experiment to demonstrate that Oxygen is evolved during Photosynthesis:

Requirements: A large Beaker, SomeHydrillaPlant, One Funnel, One Testtube, water and a glowing splinter of wood. 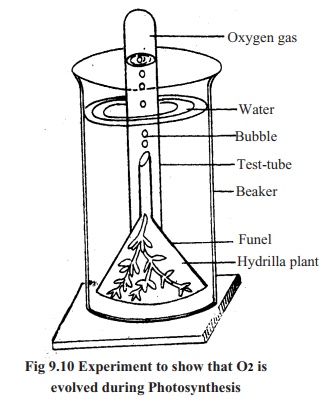 Conclusion: As the gas helps theglowing splinter to flame so the gas is Oxygen, because Oxygen does not flame itself but helps other to flame.

2. Experiment to show that photosynthesis do not occur      without chlorophyll:

Requirements: A Variegated leaf of an Ornamental plant, Alcohol, Iodine solution, and a Beaker.

Observation: After immersing in the Iodine solution it will be seen that onlythe green portion of the leaf become blue (deep violet or black).

3. Experiment to show that light is essential for Photosynthesis: Requirements:

A potted plant with green leaves, Black paper, Alcohol,Iodine solution, and clips, (the plant should keep in dark for a long time before experiment).

Procedure : Cover both side of a leaf withblack paper and clip so that Sunlight cannot reach inside. Then let the pot with the plant be kept in Sunlight. After one hour tear the leaf and boil in alcohol so that the leaf becomes chlorophyll free. Now let the leaf be immersed in iodine solution. 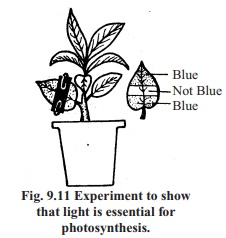 Observation : On taking out from the iodine solution it will be seen that allthe area except the covered area became blue (deep violet or black).

4. Experiment to show that photosynthesis cannot occur without CO2 : Requirements :

Procedure: The potted plant should be kept.48 hours in darkness so that the leaves do not have any starch. One-fourth of the wide mouthed bottle should be filled with caustic potash solution. 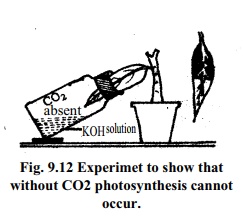 Now take out the potted plant from darkness and insert half of a leaf in the bottle through a splitted cork, and fix tightly the cork to the bottle. Care should be made taken that a part of the leaf is placed inside the bottle. The bottle should be air tight with vaseline so that no air from out side can enter into the bottle. The CO2 present in the air inside the bottle will be absorbed by caustic potash (KOH) solution. Now the experimental set should be placed in Sunlight. After 34 hours take that leaf and after boiling in alcohol immerse it in iodine solution.

Observation: On taking out of the iodine solution it will be seen that theportion of the leaf that was out side the bottle become blue (deep violet or black, and rest portion becomes yellow or brownish yellow.

5. Evolution of O2 during photosynthesis :

In non-cyclic stage of photosynthesis in the light phage, O2 evolved from splitted water. If O2 was not relesed in the atmospher in the photosynthesis process, then there would be a great scarcity of O2 in the atmosphere. As a result the entire living creature would have perished because our respiratory system stops functioning for want of O2.

Production of Carbohydrate during Photosynthesis:

Carbohydrate is produced during photosynthesis. Plant reserved the excess carbohydrate after their requirements. For example: Paddy, Wheat, Maize, Barley, Potato, Sweet Potato, Sugarcane etc. We took these as food. If green plants do not manufacture carbohydrate in photosynthesis, then for want of food all of the members of Animal Kingdom including human beings would have been destroyed.

What would happen if there were no Sunlight

If there were no Sunlight on the Earth there will have no Photosynthesis. Without photosynthesis there would be no movement of energy. The earth would become motionless. Without Sunlight no living being could exist.