Protocols of how to treat HIV disease change relatively often.

Protocols of how to treat HIV disease change relatively often. Yearly a team of physicians from throughout the United States evaluates the latest evidence and makes recommendations that are widely disseminated, and monthly a subgroup evaluates available evidence (Panel on Clinical Practices for Treatment of HIV In-fection [Panel], 2002). Treatment decisions for an individual pa-tient are based on three factors: HIV RNA (viral load); CD4 T-cell count; and the clinical condition of the patient (Panel, 2000). Treatment should be offered to all patients with the pri-mary infection (acute HIV syndrome, as previously described). In general, treatment should be offered to individuals with a T-cell count of less than 350 or plasma HIV RNA levels exceeding 55,000 copies/mL (RT-PCR assay) (Panel, 2002).

The increasing number of antiretroviral agents (Table 52-3) and the rapid evolution of new information have introduced ex-traordinary complexity into the treatment of HIV-infected per-sons (Panel, 2000). Adherence rates among persons living with HIV and AIDS are no different from those of patients with other chronic diseases (Williams, 2001). Antiretroviral regimens are complex, have major side effects, pose difficulties with regard to adherence, and carry serious potential consequences from the de-velopment of viral resistance due to lack of adherence to the drug regimen or suboptimal levels of antiretroviral agents (Panel, 2000). The goals of treatment are maximal and durable suppres-sion of viral load, restoration and/or preservation of immunologic function, improved quality of life, and reduction of HIV-related morbidity and mortality. The Panel’s guidelines recommend viral load testing at diagnosis and every 3 to 4 months thereafter in the untreated person; T-cell counts should be measured at diagnosis and generally every 3 to 6 months thereafter. 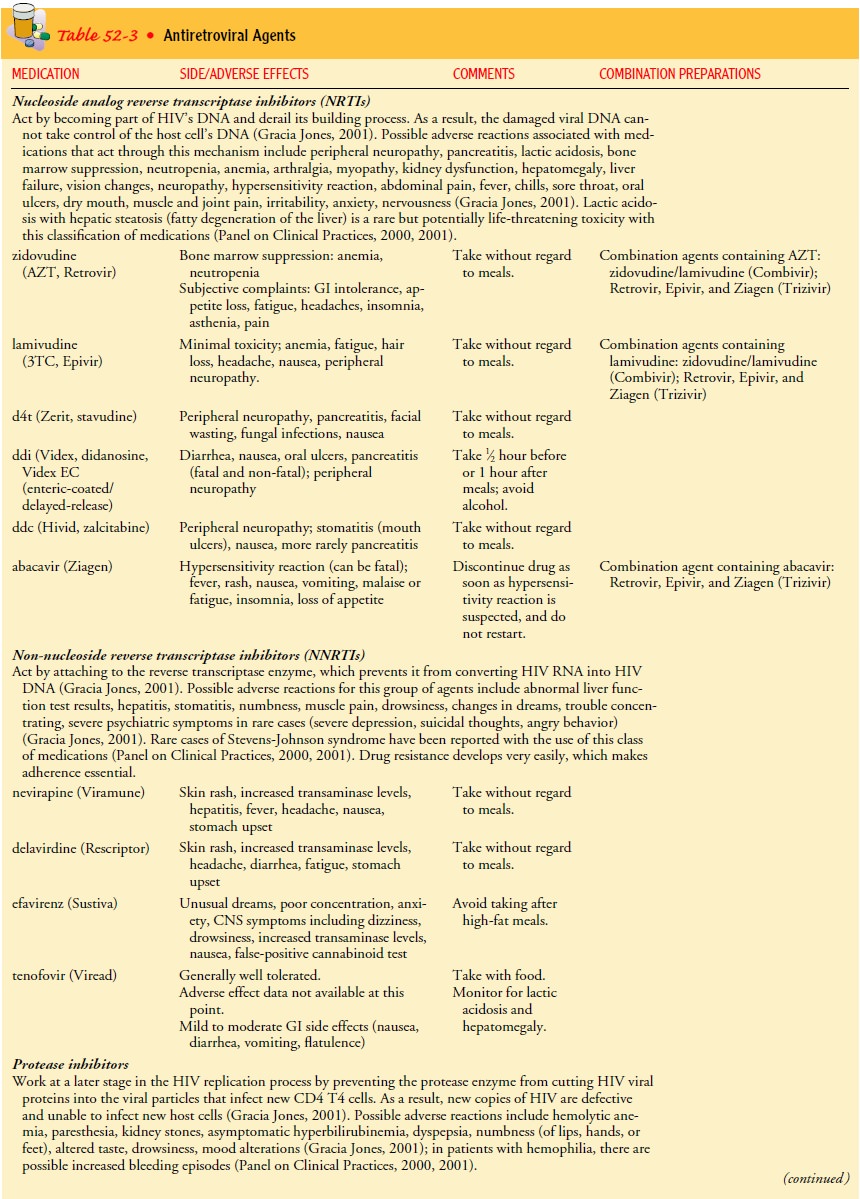 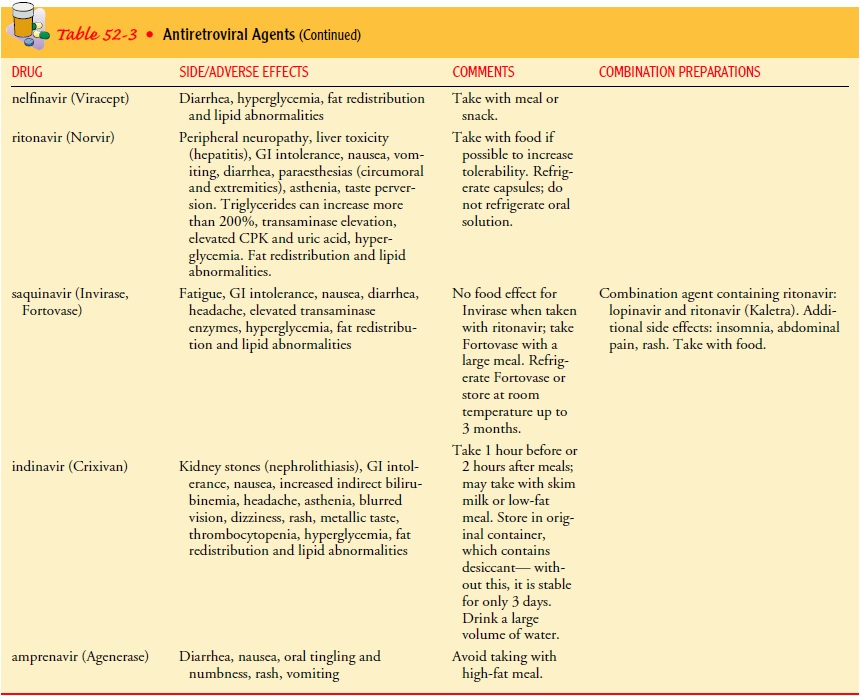 It is difficult to predict which patients will adhere to medica-tion regimens (Holzemer, Corless, Nokes, et al., 1999). Perceived engagement with the health care provider has been associated with greater adherence to HIV medication regimens (Bakken et al., 2000). Individualized plans of care that take into consideration housing and social support issues in addition to health indicators are essential.

Results of therapy are evaluated with viral load tests (Panel, 2000). Viral load levels should be measured immediately prior to and again at 2 to 8 weeks after initiation of antiretroviral therapy, since in most patients adherence to a regimen of potent anti-retroviral agents should result in a large decrease in the viral load by 2 to 8 weeks. The viral load should continue to decline over the following weeks and in most individuals will drop below de-tectable levels (currently defined as less than 50 RNA copies/mL) by 16 to 20 weeks. The rate of viral load decline toward unde-tectable levels is affected by the baseline T-cell count, the initial viral load, the potency of the medication, adherence of the pa-tient to the medication regimen, prior exposure to antiretroviral agents, and the presence of any OIs (Panel, 2000). The confirmed absence of a viral load response should prompt the health care team to re-evaluate the regimen.

All approved anti-HIV drugs attempt to block viral replica-tion within cells by inhibiting either reverse transcriptase or the HIV protease (Bartlett & Moore, 1998). A treatment duration of 5 to 7 years of continuous therapy is difficult because of the com-plexity, toxicity, and cost of the current drug regimens, especially when the concept of maintenance therapy with a simplified regimen does not seem viable (Ho, 1998). Medication side effects can make life difficult and are one of the main reasons people miss doses of the medications or stop taking them completely (Horn & Pieribone, 1999).

All medications have toxic side effects. The nurse can obtain Web-based information to remain current about medications used to treat HIV/AIDS. The NIH (National Institutes of Health) maintains an AIDS drug line Website. Increasing numbers of patients with HIV infection receiving medications are presenting with metabolic complica-tions such as increases in cholesterol and triglyceride levels, hyper-glycemia, and altered body habitus (NIAID, 2001). Toxicity to cell mitochondria may be involved in many of the side effects of HIV medications, including peripheral neuropathy, myopathy and cardiomyopathy, lactic acidosis and hepatic steatosis (fatty degeneration of liver), pancreatitis, osteopenia and osteoporosis, and bone marrow suppression. Fat redistribution (lipodystrophy syndrome, also known as pseudo-Cushing’s syndrome [Panel, 2001]) is one of the most frequent systemic side effects. Many people who have lipodystrophy experience an increase in fat loss in the legs, arms, and face and/or a buildup of fat around the ab-domen and at the base of the neck. Patients may also experience an increase in breast size. These changes in body image can be very disturbing to persons living with HIV/AIDS and have been reported to occur in 6% to 80% of patients receiving HAART (see following discussion). Hepatotoxicity associated with certain protease inhibitors may limit the use of these agents, especially in patients with underlying liver dysfunction (Panel, 2000).

Combination therapy is defined as a regimen containing any combination of two antiretroviral agents; HAART is defined as a regimen consisting of two nucleoside reverse transcriptase in-hibitors plus a protease inhibitor or a non-nucleoside reverse transcriptase inhibitor, or two protease inhibitors and one other antiretroviral agent (Agins, 2000). As new medications are devel-oped, the number of combinations continues to increase. Safety and efficacy data on many of the combination therapies are lim-ited. Use of three- and four-drug combination regimens has be-come more widespread, starting earlier in the course of infection, with careful monitoring by viral load measures. In some patients receiving three-drug regimens, viral levels are so low that they are no longer detectable. Future therapy may be individualized based on the viral strain and resistance to antiretroviral drugs. Initially, HAART consisting of a triple-drug regimen (a protease inhibitor and two non-nucleoside reverse transcriptase inhibitors) is rec-ommended. Drawbacks of HAART are the inability of some patients to adhere to the regimen, the need to take multiple medications on different dosing schedules, and the risk for drug interactions. The duration of therapy needed to control acute HIV infection is unknown, but therapy may continue for several years or for life. Combination therapy with different types of fusion and entry inhibitors (such as T-20) may be synergistic against HIV. These agents fall into a new category of HIV med-ications called fusion inhibitors and target the GP120 during the initial stage of the HIV life cycle, which is cell fusion (Saag, 2001).