During the first stage of HIV infection, the patient may be asymp-tomatic or may exhibit various signs and symptoms.

During the first stage of HIV infection, the patient may be asymp-tomatic or may exhibit various signs and symptoms. The patient history should alert the health care provider about the need for HIV screening based on the patient’s sexual practices, injection drug use, and receipt of blood transfusions. Additionally, exposure to body fluids containing infected blood while providing care to others with HIV infection, such as through needlesticks, should alert health care providers to possible HIV infection. Patients who are in later stages of HIV infection may have a variety of symp-toms related to their immunosuppressed state.

Others are used to assess the stage and severity of the infection.

In 1985, the FDA licensed an HIV-1 antibody assay, which is used to screen all blood and plasma donations. When an indi-vidual is infected with HIV, the immune system responds by pro-ducing antibodies against the virus, usually within 3 to 12 weeks after infection. This delay in the production of antibody helps to explain why a person may be infected but not test antibody-positive during primary infection. The ability to document HIV antibodies in the blood has permitted screening of blood products and facilitated identification of individuals with HIV infection. Before an HIV antibody test is performed, the meaning of the test and possible test results are explained, and informed consent for the test is obtained from the patient. When results of the HIV antibody testing are received, they are carefully explained to the patient in private (Chart 52-5). All test results are kept confiden-tial. Education and counseling about the test results and disease transmission are essential. 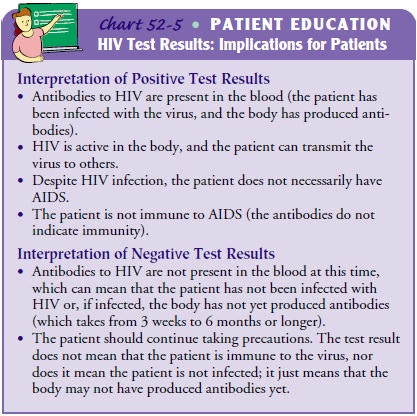 Blood samples are tested with two different blood tests to determine the presence of antibodies to HIV. The EIA (enzymeimmunoassay), formerly referred to as the ELISA (enzyme-linked immunosorbent assay) test, identifies antibodies directedspecifically against HIV. The Western blot assay is used to confirm seropositivity when the EIA is positive. People whose blood contains antibodies for HIV are seropositive. Saliva can also be tested using the EIA antibody test.

The FDA approved a rapid HIV antibody screening test in November 2002. Using less than a drop of blood, this new test can quickly (approximately 20 minutes) and reliably (99.6% ac-curacy) detect antibodies to HIV-1. It is anticipated that the newly approved HIV test, the OraQuick Rapid HIV-1 Antibody Test, will allow more rapid notification of individuals about their HIV status so that they can obtain care early in the course of HIV infection and take measures to help prevent the spread.

Patients’ psychological responses to seropositive test results may include feelings of panic, depression, and hopelessness. The social and interpersonal consequences of a positive test result can be devastating. Patients may lose their sexual partners and their health insurance because of disclosure; they may experience dis-crimination in employment and housing as well as social os-tracism. For these reasons and others, patients who test positive may need ongoing counseling as well as referrals for social, financial, medical, and psychological support services. Patients whose test results are seronegative may develop a false sense of se-curity, possibly resulting in continued high-risk behaviors or feel-ings that they are immune to the virus. They may need ongoing counseling to help them modify high-risk behaviors and to return for repeated testing. Other patients may experience anxiety re-garding the uncertainty of their status.

Home-based testing for HIV antibodies using a small amount of blood was first proposed in 1985 but not approved by the FDA until 1995. Although home testing kits are commercially avail-able, they do raise concerns because of the lack of counseling and the possibility of inaccurate results, including both false-positive and false-negative results (Lewis, 2001).

Target amplification methods quantify HIV RNA or DNA lev-els in the plasma and have replaced p24 antigen capture assays. Target amplification methods include reverse transcriptase poly-merase chain reaction (RT-PCR) or nucleic acid sequence-based amplification (NASBA). A widely used viral load test measures plasma HIV RNA levels. Currently, these tests are used to track viral load and response to treatment for HIV infection. RT-PCR is also used to detect HIV in high-risk seronegative people before the development of antibodies, to confirm a positive EIA, and to screen neonates. HIV culture or quantitative plasma culture and plasma viremia are additional tests that measure viral burden, but they are used infrequently. Viral load is a better predictor of the risk of HIV disease progression than the CD4count. The lower the viral load, the longer the time to AIDS diagnosis and the longer the survival time.