The stage of HIV disease is based on clinical history, physical ex-amination, laboratory evidence of immune dysfunction, signs and symptoms, and infections and malignancies.

The stage of HIV disease is based on clinical history, physical ex-amination, laboratory evidence of immune dysfunction, signs and symptoms, and infections and malignancies. The CDC stan-dard case definition of AIDS categorizes HIV infection and AIDS in adults and adolescents on the basis of clinical conditions asso-ciated with HIV infection and CD4+ T-cell counts. The classifi-cation system (Table 52-1) groups clinical conditions into one of three categories denoted as A, B, or C. 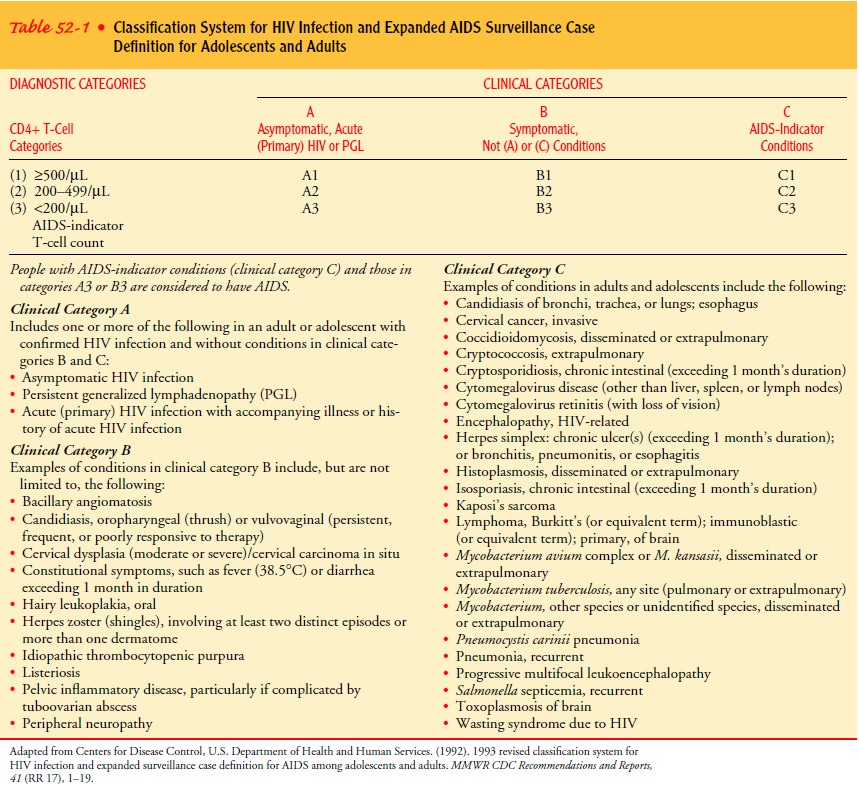 The period from infection with HIV to the development of anti-bodies to HIV is known as primary infection. During this pe-riod, there is intense viral replication and widespread dissemination of HIV throughout the body. Symptoms associated with theviremia range from none to severe flu-like symptoms. During the primary infection period, the window period occurs because a person is infected with HIV but tests negative on the HIV anti-body blood test. Although antibodies to the HIV envelope glyco-proteins typically can be detected in the sera of HIV-infected individuals by 2 to 3 weeks after infection, most of these anti-bodies lack the ability to inhibit virus infection. By the time neu-tralizing antibodies are detected, HIV-1 is firmly established in the host (Wyatt & Sodroski, 1998). During this period, there are high levels of viral replication and the killing of CD4 T cells, re-sulting in high levels of HIV in the blood and a dramatic drop in CD4 T cell counts from the normal level of at least 800 cells/mm3 of blood. About 3 weeks into this acute phase, individuals may display symptoms reminiscent of mononucleosis, such as fever, enlarged lymph nodes, rash, muscle aches, and headaches. These symptoms resolve within another 1 to 3 weeks as the immune sys-tem begins to gain some control over the virus. That is, the CD4 T-cell population responds in ways that spur other immune cells, such as CD8 lymphocytes, to increase their killing of infected, virus-producing cells. The body produces antibody molecules in an effort to contain the virus; they bind to free HIV particles (outside cells) and assist in their removal (Bartlett & Moore, 1998). This balance between the amount of HIV in the body and the immune response is referred to as the viral set point and re-sults in a steady state of infection. During this steady state, which can last for years, the amount of virus in circulation and the num-ber of infected cells equal the rate of viral clearance (Ropka & Williams, 1998).

Primary HIV infection, the time during which the viral burden set point is achieved, includes the acute symptomatic and early in-fection phases. During this initial stage, viral replication is asso-ciated with dissemination in lymphoid tissue and a distinct immunologic response. The final level of the viral set point is in-versely correlated with disease prognosis; that is, the higher the viral set point, the poorer the prognosis (Cates, Chesney & Cohen, 1997). The primary infection stage is part of CDC category A.

On reaching a viral set point, a chronic, clinically asymptomatic state begins. Despite its best efforts, the immune system rarely if ever fully eliminates the virus. By about 6 months, the rate of viral replication reaches a lower but relatively steady state that is re-flected in the maintenance of viral levels at a kind of “set point.” This set point varies greatly from patient to patient and dictates the subsequent rate of disease progression; on average, 8 to 10 years pass before a major HIV-related complication develops. In this prolonged, chronic stage, patients feel well and show few if any symptoms (Bartlett & Moore, 1998). Apparent good health con-tinues because CD4 T-cell levels remain high enough to preserve defensive responses to other pathogens.

Over time, the number of CD4 T cells gradually falls. Category B consists of symptomatic conditions in HIV-infected patients that are not included in the conditions listed in category C. These conditions must also meet one of the following criteria: (1) the condition is due to HIV infection or a defect in cellular immu-nity, or (2) the condition must be considered to have a clinical course or require management that is complicated by HIV infec-tion. If an individual was once treated for a category B condition and has not developed a category C disease but is now symptom-free, that person’s illness would be considered category B

When CD4 T-cell levels drop below 200 cells/mm3 of blood, pa-tients are said to have AIDS. As levels fall below 100, the immune system is significantly impaired (Bartlett & Moore, 1998). Once a patient has had a category C condition, he or she remains in cat-egory C. This classification has implications for entitlements (ie, disability benefits, housing, and food stamps) since these pro-grams are often linked to an AIDS diagnosis. Although the re-vised classification emphasizes CD4+ T-cell counts, it allows for CD4+ percentages (percentage of CD4+ T cells of total lympho-cytes). The CD4+ percentage is less subject to variation on re-peated measurements than is the absolute CD4+ T-cell count. Less than 14% of the CD4+ T cells of the total lymphocytes is consistent with an AIDS diagnosis. The percentage, as compared to the absolute number of CD4+ T cells, becomes particularly important when the patient has a heightened immune response to infections in addition to HIV. One complication of advanced HIV infection is anemia, which may be caused by HIV, oppor-tunistic diseases, and medications (Collier et al., 2001).