Since acquired immunodeficiency syndrome (AIDS) was first recognized more than 20 years ago, remarkable progress has been made in improving the quality and duration of life of persons with HIV infection.

Since acquired immunodeficiency syndrome (AIDS) was first rec-ognized more than 20 years ago, remarkable progress has been made in improving the quality and duration of life of persons  with HIV infection. During the first decade, this progress was asso-ciated with recognition of opportunistic disease processes, more ef-fective therapy for complications, and introduction of prophylaxis against common opportunistic infections (OIs). The second decade has witnessed progress in developing highly active anti-retroviral therapies (HAART) as well as continuing progress in treating OIs (Masur, Kaplan & Holmes, 1999). Since the HIV serologic test (enzyme immunoassay [EIA], formerly enzyme-linked immunosorbent assay [ELISHA]), became available in 1984, allow-ing early diagnosis of the infection before onset of symptoms, HIV infection has been best managed as a chronic disease and most ap-propriately managed in an outpatient care setting (Gallant, 2001).

In fall 1982, the Centers for Disease Control and Prevention (CDC) issued a case definition of AIDS after the first 100 cases were reported. Since then, the CDC has revised the case defini-tion a number of times (1985, 1987, and 1993). All 50 states, the District of Columbia, U.S. dependencies and possessions, and in-dependent nations in free association with the United States re-port AIDS cases to the CDC using a uniform surveillance case definition and case report form (CDC, 2000). Starting in the late 1990s, more states started to implement HIV case reporting in response to the changing epidemic and the need for information on persons with HIV infection who have not developed AIDS.

As of December 2001, there were 816,149 reported cases of HIV/AIDS and 506,154 adults, adolescents, and children in the United States (including U. S. dependencies, possessions, and as-sociated nations) living with AIDS. Unprotected sex and sharing of injection drug use equipment are the major means of trans-mission of HIV. A total of 43,158 AIDS cases were diagnosed in 2001. For men diagnosed with AIDS during 2001, 59% were in the exposure category of men who have sex with men; 24% in injection drug use; and 7% in heterosexual contact. In women diagnosed with AIDS during that same period, 44% reported in-jection drug use and 52% reported heterosexual contact. Com-paring race/ ethnicity among the three largest groups diagnosed in 2001, 20,752 were black, not Hispanic; 11,675 were Caucasian; and 8,221 were Hispanic (CDC, 2002).

The earliest confirmed case of HIV infection was found in blood drawn from an African man in 1959 (Stephenson, 1998). Although factors associated with the spread of HIV in Africa re-main unknown, possibilities include the reuse of unsterilized nee-dles in large-scale vaccination campaigns that began in Africa in the 1960s; however, social changes such as easier access to trans-portation, increasing population density, and more frequent sex-ual contacts may have been more important (Stephenson, 1998).

HIV-1 is transmitted in body fluids containing HIV and/or in-fected CD4+ (or CD4) T lymphocytes. These fluids include blood, seminal fluid, vaginal secretions, amniotic fluid, and breast milk. Mother-to-child transmission of HIV-1 may occur in utero, at the time of delivery, or through breastfeeding, but transmission frequency during each period has been difficult to determine (Nduati et al., 2000). Any behavior that results in breaks in the skin or mucosa results in the increased probability of exposure to HIV (Chart 52-1). Since HIV is harbored within lymphocytes, a type of white blood cell, any exposure to infected blood results in a significant risk of infection. The amount of virus and infected cells in the body fluid is associated with the risk of new infections. 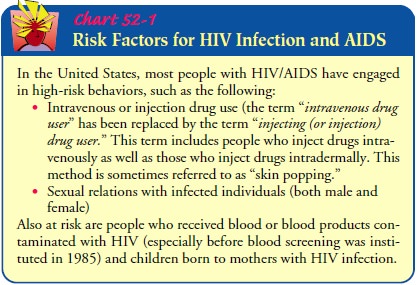 Blood and blood products can transmit HIV to recipients. However, the risk associated with transfusions has been virtually eliminated as a result of voluntary self-deferral, serologic testing, heat treatment of clotting factor concentrates, and more effective virus inactivation methods. Blood donor screening tests detect antibodies to HIV-1 and HIV-2, and p24 antigen testing has been added as an interim measure (American Red Cross, 2001). However, blood donated during the window period will be in-fectious but will test negative for HIV antibodies. The window pe-riod is the period of time between initial infection of HIV and development of a positive antibody test for HIV. Although anti-bodies will usually be detected within 3 to 6 months, the window period can last up to a year.