Transport of gases(oxygen and Carbon-dioxide) in Respiration

Molecular oxygen is carried in blood in two ways: bound to haemoglobin within the red blood cells and dissolved in plasma. 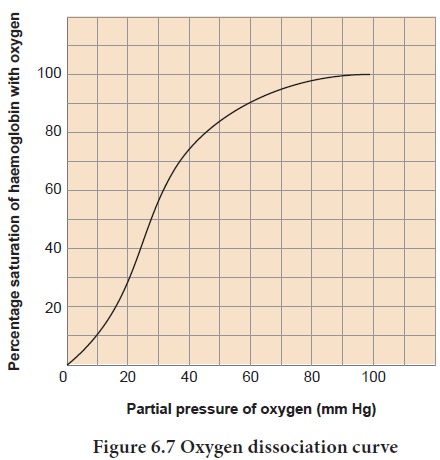 A sigmoid curve (S–shaped) is obtained whenpercentagesaturationofhaemoglobin with oxygen is plotted against pO2. This curve is called oxygenhaemoglobin dissociation curve (Figure 6.7). This S–shaped curve has a steep slope for pO2 values between 10 and 50mmHg and then flattens between 70 and 100 mm Hg.

Under normal physiological conditions, every 100mL of oxygenated blood can deliver about 5mL of O2 to the tissues.

i. Dissolved in plasma About 7 – 10% of CO2 is transported in a dissolved form in the plasma.

ii.Bound to haemoglobin About 20 – 25% of dissolved CO2 is bound and carried in the RBCs as carbaminohaemoglobin (Hb CO2)

Carbonic anhydrase facilitates the reaction in both directions.

The HCC3– moves quickly from the RBCs into the plasma, where it is carried to the lungs. At the alveolar site where pCO2 is low, the reaction is reversed leading to the formation of CO2 and water. Thus CO2 trapped as HCC3– at the tissue level it is transported to the alveoli and released out as CO2. Every 100mL of deoxygenated blood delivers 4mL of CO2 to the alveoli for elimination. 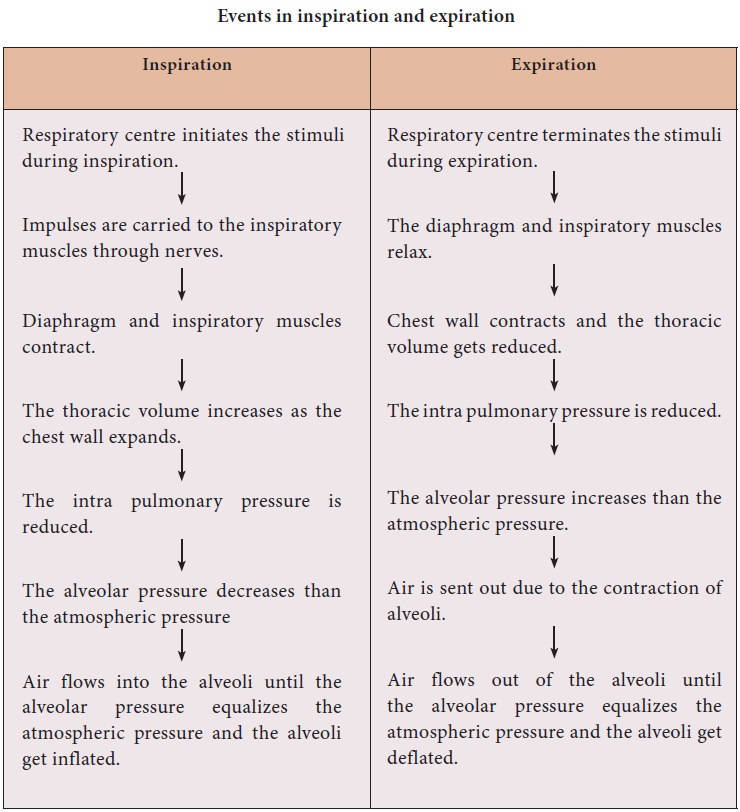 The Haldane effect, on the other hand describes how oxygen concentrations determines hemoglobin’s affinity for carbon dioxide. The amount of carbon dioxide transported in blood is remarkably affected by the degree oxygenation of the blood. The lower the partial pressure of. O2 lower is the affinity of haemoglobin saturation with oxygen hence more CO2 is carried in the blood. This phenomenon is called Haldane effect. This effects CO2 exchanges in both the tissues and lungs.

In the lungs the process is reversed as the blood moves through the pulmonary capillaries, its PCO2 declines from 45mm Hg to 40mm Hg. For this to occur carbondioxide is freed from HCC3- ions and Cl- ions moves in to the plasma and reenters the RBC and binds with H+ to form carbonic acid which dissociates in to CO2 and water. This CO2 diffuses along its partial gradient from the blood to the alveoli (Figure 6.8). 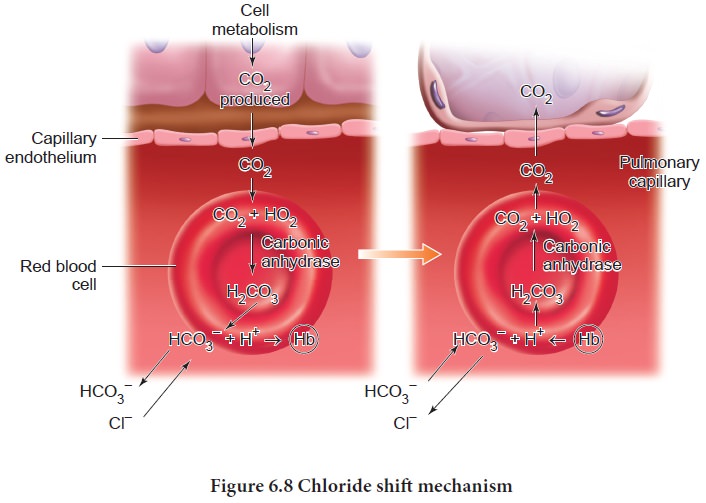