Disorders of the Respiratory system

Disorders of the Respiratory system

Respiratory system is highly affected by environmental, occupational, personal and social factors. These factors may be responsible for a number of respiratory disorders. Some of the disorders are discussed here.

Asthma – It is characterized by narrowing and inflammation of bronchi and bronchioles and difficulty in breathing. Common allergens for asthma are dust, drugs, pollen grains, certain food items like fish, prawn and certain fruits etc.

Emphysema– Emphysema is chronic breathlessness caused by gradual breakdown of the thin walls of the alveoli decreasing the total surface area of a gaseous exchange. i.e., widening of the alveoli is called emphysema. The major cause for this disease is cigarette smoking, which reduces the respiratory surface of the alveolar walls.

Bronchitis– The bronchi when it gets inflated due to pollution smoke and cigarette smoking, causes bronchitis. The symptoms are cough, shortness of breath and sputum in the lungs.

Pneumonia– Inflammation of the lungs due to infection caused by bacteria or virus is called pneumonia. The common symptoms are sputum production, nasal congestion, shortness of breath, sore throat, etc.

Tuberculosis– Tuberculosis is caused by Mycobacterium tuberculae. This infection mainly occurs in the lungs and bones.

Collection of fluid between the lungs and the chest wall is the main complication of this disease.

Long exposure can give rise to inflammation leading to fibrosis. Silicosis and asbestosis are occupational respiratory diseases resulting from inhalation of particle of silica from sand grinding and asbestos into the respiratory tract. Workers, working in such industries must wear protective masks. 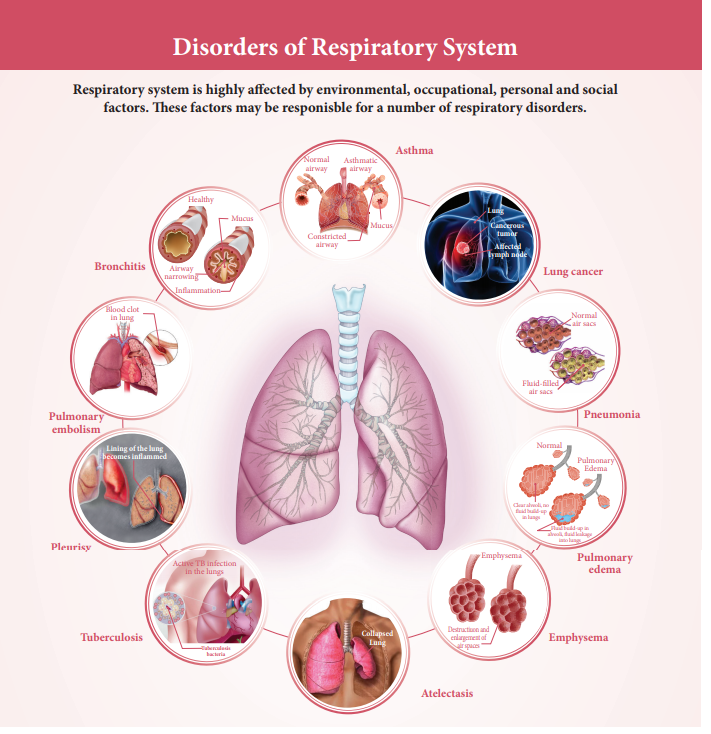 • Pulmonary embolism is a blood clot that occurs in the lungs.

• Bronchitis is an inflammation of the lining of your bronchial tubes.

• Asthma is a condition in which airways narrow and swell and produce extra mucus.

• Lung cancer -The number one cause of cancer deaths. Smoking is the risk factor for lung cancer.

• Pneumonia is an inflammatory condition of the lung affecting primarily the small air sacs known as alveoli.

• Pulmonary edema is a fluid accumulation in the tissue and air spaces of the lungs.

• Emphysema A lung condition that causes shortness of breath due to widening of alveoli.

• Atelectasis is a collapse of a lung or lobe of a lung develops when alveoli within the lung become deflated.

• Tuberculosis is an infectious disease caused due to Mycobacterium tubuerculae.

• Pleurisy is a condition in which the pleura becomes inflamed.