RNA is translated from the 5′ end of the molecule toward the 3′ end.

RNA is translated from the 5′ end of the molecule toward the 3′ end. Polypeptides are synthesized from the amino terminus toward the carboxyl terminus, by adding amino acids one by one to the carboxyl end. Not all the base sequences in an mRNA is translated into amino acid sequences of polypeptides. Initiation of polypeptide synthesis may begin hundreds of nucleotides from the 5′ – P terminus of the RNA. The section of untranslated RNA before the region encoding the first polypeptide chain is called a leader, which in some cases contains regulatory sequences that influence the rate of protein synthesis. The major events in translation are (Figure 12.4). 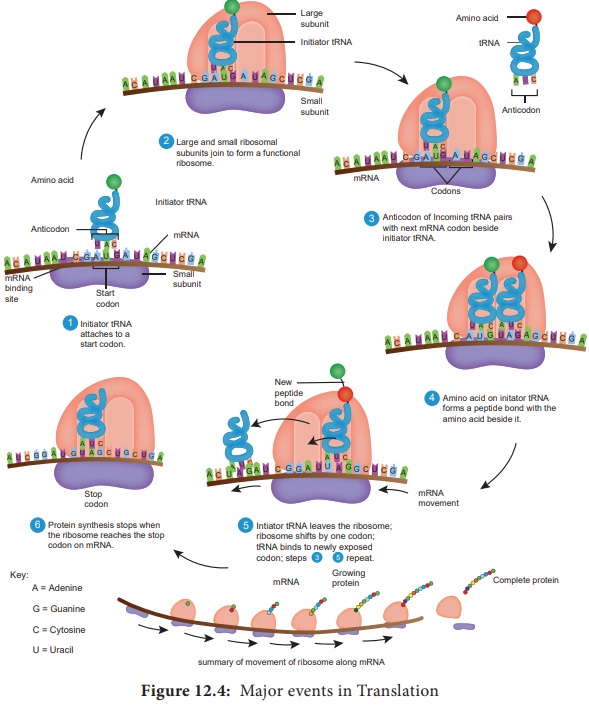 1. An mRNA binds to the surface of a protein synthesizing particle, the Ribosome.

2. The tRNA – amino acid complexes (made by the aminoacyl tRNA synthetases) bind sequentially, one by one, to the mRNA molecule that is attached to the ribosome.

3. Peptide bonds are made between successively aligned amino acids.

4. Finally the chemical bond between the tRNA and its attached amino acids is broken and the completed protein is removed.

• The 3′ terminal of the tRNA molecule (Figure 12.5) is covalently linked to the amino acid corresponding to the particular mRNA codon . 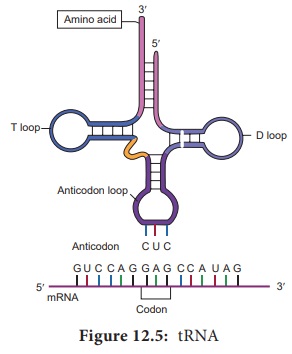 • When an amino acid has become attached to a tRNA molecule, the tRNA is said to be acylated or charged

• An important feature of initiation of polypeptide synthesis in both prokaryotes and eukaryotes is the use of a specific initiating tRNA molecule. In prokaryotes this tRNA molecule is acylated with the modified amino acid N – formyl methionine (fMet). This tRNA is often designated tRNAfMet. Both tRNAfMet and tRNAMet recognize the codon AUG, but only tRNAfMet is used for initiation. All prokaryotic proteins while being synthesized have fMet at the amino terminus. However, this amino acid is frequently deformylated or removed later.

• The usual form of translation unit is a polyribosome or polysome wherein an mRNA is covered with ribosomes.

Redundancy and the Wobble Hypothesis

The identity of the third base of a codon appears to be unimportant. (The first base in a codon is at the 5′ end and the third base is at the 3′ end). Wobble refers to the less stringent requirement for base pairing at the third position of the codon than at the first two positions. That is the first two bases must follow Watson and Crick base pairing rule (A with U, or G with C), but the third base pair can be of a different type (for example, G with U). The Wobble hypothesis explains the pattern of redundancy in the code in that certain anticodons (For example, those containing U and G in the first position of the anticodons) can pair with several codons during translation (Figure 12.6). 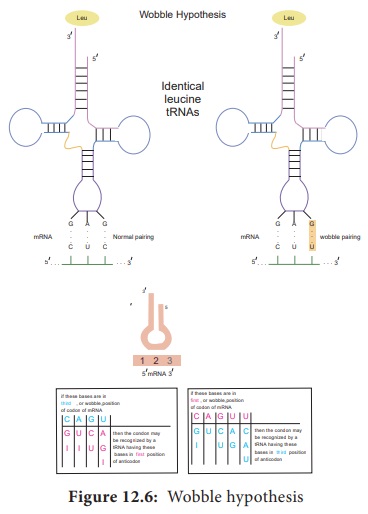