The site where the DNA is cut by a restriction enzyme is called recognition sequence.

In 1960s Swiss microbiologist Werner Arber and American microbiologists Hamilthon Othanel Smith and Daniel Nathans discovered restriction enzymes. The discovery, for which the three men shared the 1978 Nobel Prize for Physiology or Medicine. Restriction enzymes or restriction endonucleases are one of the most important groups of enzymes for the manipulation of DNA. It is one of the important molecular tools used by a genetic engineer. These are the bacterial enzymes that recognize a specific base sequence in a DNA molecule (from any source) and make two cuts one in each strand generating 3′ – OH and 5′ – P termini. They were first discovered in E.coli. E.coli produces the restriction enzyme to cut the viral DNA and protect itself. The host E.coli DNA is protected by its own restriction enzyme since its methylated. Since these enzymes restrict the viral replication the word restriction is added to these enzymes. Hind II was the first discovered restriction endonuclease.

The site where the DNA is cut by a restriction enzyme is called recognition sequence. Restriction endonucleases can specifically recognize DNA with a particular sequence of 4-8 nucleotides and cleave. Each recognition sequence has two fold rotational symmetry i.e. the same nucleotide sequence occurs on both strands of DNA which run in opposite direction. Such sequences are referred to as palindromes, since they read similar in both directions (forwards and backwards). Majority of restriction endonucleases (particularly type II) cut DNA at defined sites within recognition sequence. Type II restriction enzymes make two single – stand breaks) one break in each strand. There are two distinct arrangements of these breaks 1. both breaks at the center of symmetry (generating flush or blunt ends) or 2. breaks that are symmetrically placed around the line of symmetry generating cohesive ends. Figure  12.29 shows two types of cuts made by restriction enzymes. The arrow indicates the cleavage site. 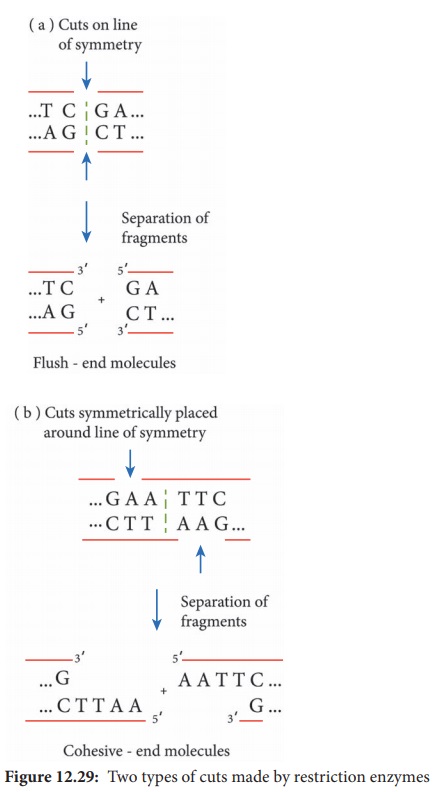 The dashed line is the center of symmetry of the sequence (Table 12.2).

a. Production of medically useful proteins such as somato stain, insulin, human growth hormone and interferon. It decreases the dependency on human tissues and solves problem of limited production

b. Development of synthetic vaccines for instance, vaccines for malaria and rabies a recombinant hepatitis vaccine is already commercially available.