A tRNA molecule “reads” the base sequence of mRNA.

A tRNA molecule “reads” the base sequence of mRNA. The language read by the tRNA molecules is called the genetic code, which is a set of relations between sequences of three adjacent bases on an mRNA molecule and particular amino acids. (A RNA base sequence (a set of 3 bases) corresponding to a particular amino acid is called a codon). The genetic code is the set of all codons. Only four bases in DNA serve to specify 20 amino acids in proteins, so some combination of bases is needed for each amino acid. Before the genetic code was elucidated, it was reasoned that if all codons were assumed to have the same number of bases, then each codon would have to contain at least three bases. Codons consisting of pairs of bases would be insufficient because four bases can form only 42 = 16 pairs, and there are 20 amino acid. Triplets of bases would suffice because, these can form 43 64 triplets. In fact, the genetic code is a triplet code, and all 64 possible codons carry information of some sort. Several different codons designate the same amino acid. Furthermore, in translating mRNA molecules the codons do not overlap but are used sequentially. The same genetic code is used by almost all biological systems and hence is said to be universal (exceptions are mitochondria and a few unusual microorganisms). The codons are by convention written with the 5′ end at the left. The complete code is shown in Table 12.1. 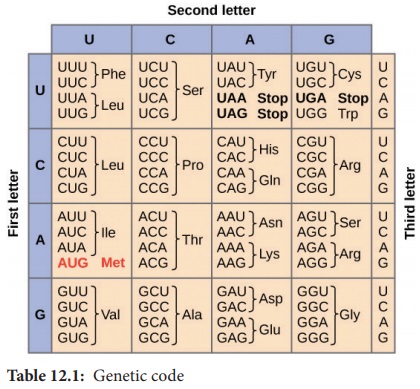 Features of the Code:

• Sixtyone codons correspond to amino acids. Four codons are signals. These are the three stop codons – UAA, UAG, UGA – and the one start codons, AUG. The start codons (initiation codon) also specifies the amino acid methionine. In rare cases, certain other codon (E.g. GUG) initiate translation. No normal tRNA molecule has an anticodon (a sequence of three bases on tRNA that can base – pair with a codon sequence in the mRNA) complementary to any of the stop codons UAG, UAA or UGA, which is why these codons are stop signals.

• The code is highly redundant i.e. more than one codons code for an amino acid. Only tryptophan and methionine are specified by one codon. The synonymous codons usually differ only in third base (except for serine, leucine and arginine).

1. How many of the 64 codons can be made from the three nucleotides A, U, and C?

2. If codons were four bases long, how many codons would exist in a genetic code?